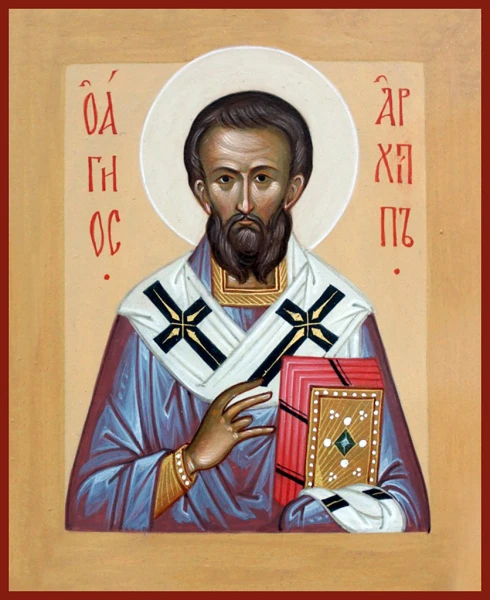 St. Archippus, an Apostle of the Seventy, was a student and companion of the holy Apostle Paul. In the Epistle Philemon, Paul mentions St. Archippus as his companion, and mentions him again in the Epistle to the Colossians (Col. 4:17). St. Archippus was bishop of Colossae in Phrygia. During the persecution against Christians under the emperor Nero (54-68), the holy Apostle Archippus, along with his fellow apostles Philemon and Apphia, were brought to trial by the ruler Artocles for confessing faith in Christ. St. Archippus was brutally slashed with knives. Saints Philemon and Apphia were tortured, buried up to the waist, then stoned to death.

O holy apostle Archippus, intercede with the all-merciful God that He may grant us forgiveness of our sins.

The Church sees you, O Archippus, as a major star, and she has been enlightened by the rays of your miracles. Therefore, she cries out to you: Save those who fervently honor your memory.

Readings of the day

Brothers and sisters: “All things are lawful,” but not all are advantageous. “All things are lawful” – which does not mean that everything is constructive. No man should seek his own interest but rather that of his neighbor. Eat whatever is sold in the market without raising any Question of conscience. [Scripture says,] “The earth and its fullness are the Lord’s.” If an unbeliever invites you to his table and you want to go, eat whatever is placed before you, without raising Question of conscience. But if someone should say to you, “This was offered in idol worship,” do not eat it, both for the sake of the one who called attention to it and on account of the conscience issue – not your own conscience but your neighbor’s.

The Lord said: “Take care not to be misled. Many will come in my name saying, ‘I am he’ and [they will also say] ‘The time is at hand.’ Do not follow them. Neither must you be perturbed when you hear of wars and insurrections. These things are bound to happen first, but the end does not follow immediately.”

“There will be signs in the sun, the moon and the stars. On the earth, nations will be in anguish, distraught at the roaring of the sea and the waves. Men will die of fright in anticipation of what is coming upon the earth. The powers in the heavens will be shaken. After that, men will see the Son of Man coming on a cloud with great power and glory.

“The heavens and the earth will pass away, but my words will not pass. Be on guard lest your spirits become bloated with indulgence and drunkenness and worldly cares. The great day will suddenly close in on you like a trap. The day I speak of will come upon all who dwell on the face of the earth. So be on the watch. Pray constantly for the strength to escape whatever is in prospect, and to stand secure before the Son of Man.”

Readings for All Souls

Brothers and sisters: We would have you be clear about those who sleep in death; otherwise you might yield to grief, like those who have no hope. For if we believe that Jesus died and rose, God will bring forth with him from the dead those who have fallen asleep believing in him. We say to you, as if the Lord himself had said it, that we who live, who survive until his coming, will in no way have an advantage over those who have fallen asleep. No, the Lord himself will come down from heaven at the word of command, at the sound of the archangel’s voice and God’s trumpet; and those who have died in Christ will rise first. Then we, the living, the survivors, will be caught up with them in the clouds to meet the Lord in the air. Therefore we shall be with the Lord unceasingly.

The Lord said: “I solemnly assure you, the man who hears my word and has faith in him who sent me possesses eternal life. He does not come under condemnation, but has passed from death to life. I solemnly assure you, an hour is coming, has indeed come, when the dead shall hear the voice of the Son of God, and those who have heeded it shall live. Indeed, just as the Father possesses life in himself, so has he granted it to the Son to have life in himself. The Father has given over to him power to pass judgment because he is Son of Man; no need for you to be surprised at this, for an hour is coming in which all those in their tombs shall hear his voice and come forth. Those who have done right shall rise to live; the evildoers shall rise to be damned. I cannot do anything myself. I judge as I hear, and my judgment is honest because I am not seeking my own will but the will of him who sent me.”