Feb. 18 Our Father among the Saints Leo, Pope of Rome 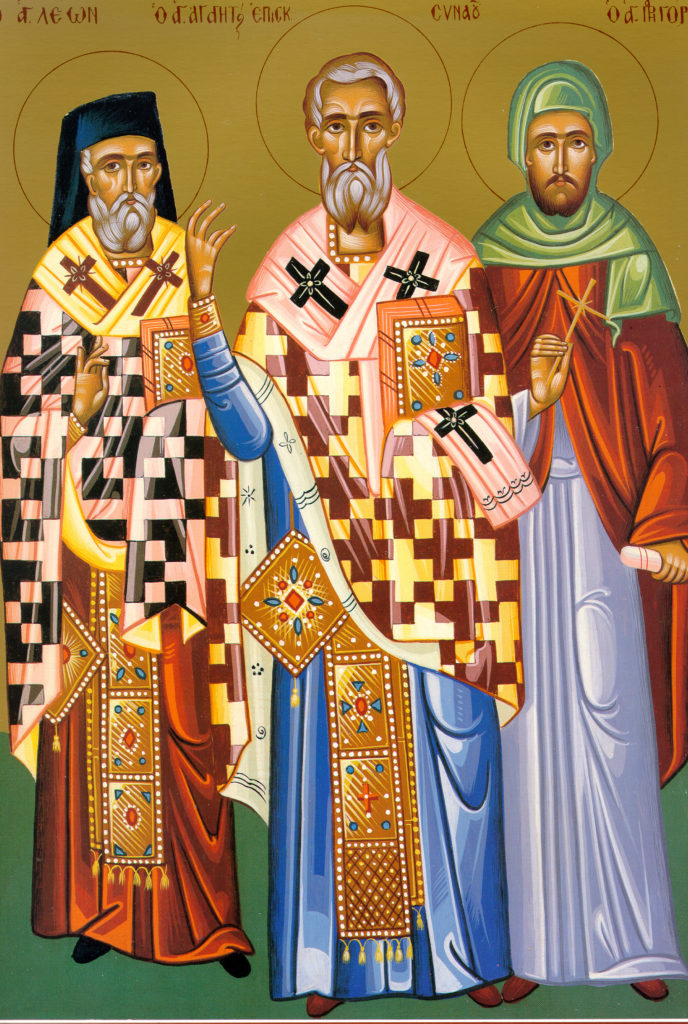 Our holy father Leo, Pope of Rome who was born in Etruria [Tuscany], first stood out as a diligent deacon of Rome. He was then elevated to the chair of Peter, where rightly and by his  merit he deserved to be called “the Great.” He nourished his flock by his excellent and prudent discourse. He exerted all his influence to put an end to the unrest by the heretics in the Church, and by his letters to the holy emperors Theodsius II (408-450) and Marcia (450-457), he actively promoted the convening of the Fourth Ecumenical council in 451, to condemn the heresy of the Monophysites. At the Council, at which 630 bishops were present, a letter of St. Leo wrote to the deceased Saint Flavian, Patriarch of Constantinople was read. Saint Flavian had suffered for orthodoxy under the “Robber Council” of Ephesus In the year 49. And the letter of Saint Theo the orthodox teaching about the two natures in the Lord Jesus Christ was that fourth. All bishops present at the council were in agreement with this teaching and saw the Heretics Eutyche, Discorus were excommunicated from the church. He rested in the Lord at Rome, where he was buried on this day (471).

O guide of the true faith, mirror of piety and commendable behavior, bright star of the universe, and adornments of pontiffs, you enlightened us all by your teachings. O wise Leo, inspired by God and lyre of the Holy Spirit, intercede with Chrsit our God that He may save our souls.

O glorious Leo, when you rose to the episcal see, you stopped the mouths of lions by exposing your flock with the knowledge of God. Therefore, you were glorified, O contemplator of things divine.

The elder to a Lady who is elect and to her children. In truth I love each of you – and that only I but also all those who have come to know the truth. This love is based on the truth that abides in us and will be with us forever. In truth and love, then, we shall have grace, mercy, and peace from God the Father and from Jesus Christ, the Father’s Son.

It has given me great joy to find some of your children walking in the path of truth, just as we were commanded by the Father. By now, my Lady, I would make this request of you (not as if I were writing you some new commandment; rather, it is a commandment we have had from the start): let us love one another. This love involves our walking according to the commandments, and as you have heard from the beginning, the commandment is the way in which you should walk.

Many deceitful men have gone out into the world, men who do not acknowledge Jesus Christ is coming in the flesh. Such is the deceitful one! This is the antichrist! Look out that you yourselves do not lose what you have worked for; you must receive your reward in full. Anyone who is so “progressive” that he does not remain rooted in the teaching of Christ does not possess God, well anyone who remains rooted in the teaching possesses both the Father and the Son. If anyone comes to you who does not bring this teaching, do not receive him into your house; do not even greet him, for whoever greets him shares in the evil he does.

Well there is much more that I could write you, I do not intend to put it down on paper; instead, I hope to visit you and talk with you face-to-face, so that our joy may be full. The children of your elect sister send you their greetings.

At that time they brought Jesus to the site of Golgotha (which means “Skull Place”). It was about nine in the morning when they crucified him.

When noon came, darkness fell in the whole countryside and lasted until midafternoon. At that time, Jesus cried in a loud voice, “Eloi, Eloi, lama sabachthani?” which means, “My God, my God, why have you forsaken me?” A few bystanders who heard it remarked, “Listen! He is calling on Elijah!” Someone ran off, and soaking a sponge in sour wine, stuck it on a reed to try to make him drink. The man said, “Now let’s see whether Elijah comes down to take him down.”

Then Jesus, uttering a loud cry, breathed his last. At that moment the curtain in the sanctuary was torn in two from top to bottom. The centurion who stood guard over him, on seeing the manner of his death, declared, “Clearly this man was Son of God!” There were also women present looking on from a distance. Among them were Mary Magdalene, Mary the mother of James the younger and Joses and Salome. There women had followed Jesus when he was in Galilee and attended to his needs. There were also many others who had come up with him to Jerusalem.