Feb. 21 Our Venerable Father Timothy of Symbola; Our Father among Saint Eustathius, Archbishop of Great Antioch 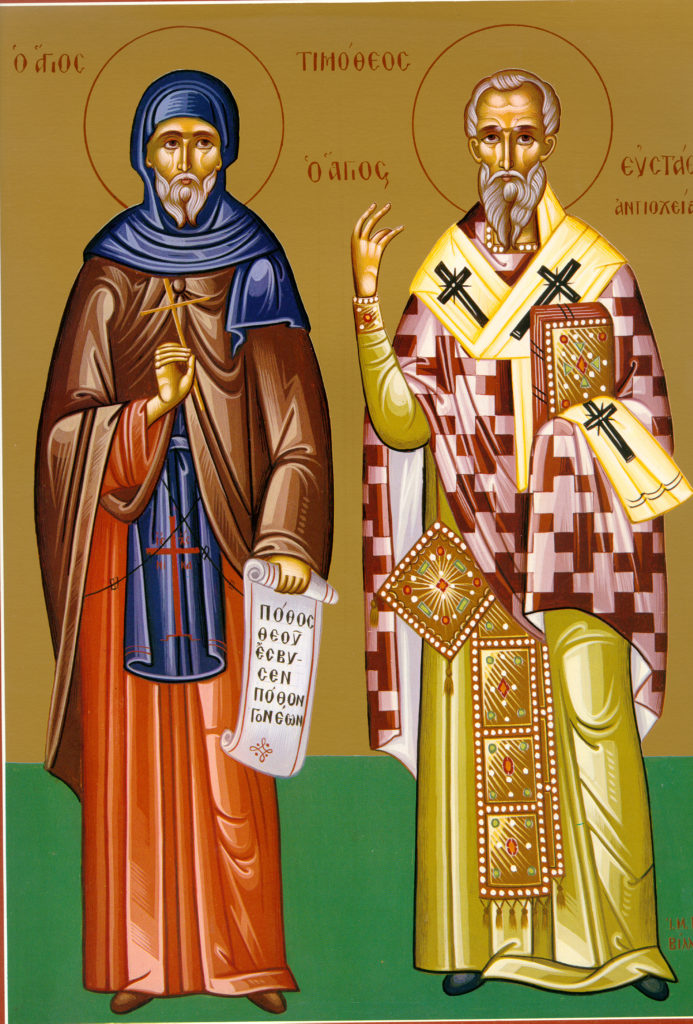 St. Timothy of Symbola was of Italian descent. He became a monk at a young age and pursued asceticism at a monastery called “Symbola”, in Asia Minor near Mount Olympus. At that time Theoctistus was the archimandrite of the monastery. St. Timothy was a disciple of Theoctistus and also of St. Platon of the Studion Monastery. He spent many years as a hermit, roaming the wilderness, the mountains and forests, both day and night offering up prayers to the Lord God. He died at a great old age, in the year 795.

St. Eustathius, Archbishop of Antioch (323-331) was born in Side, Pamphylia. He was Bishop of Beroa (modern Aleppo), and enjoyed the love and esteem of the people, and at the request of his flock he was elevated by the Fathers of the First Ecumenical Council (325) to the See of Antioch. St. Eustathius was the first to preside over the First Ecumenical Council. The Council condemned the heretical teachings of Arius and incorporated the Orthodox confession into the Symbol of Faith (the Nicene Creed).

Rising in the east like a radiant star, you illumine the hearts of the faithful by your miracles. O vessel of miracles, O most blessed Timothy.

You preached that the Word had one nature with the Father and the Spirit, O pastor Eustathius. You defeated Arius with the cords of your dogma. You were a heavenly light to the fathers of the Council and have become a champion of the Trinity. As you stand before them, pray for the salvation of our souls.

The elder to the beloved Gaius, whom I indeed love.

Beloved, I hope you are in good health – may you thrive in all other ways as you do in the spirit. For it has given me great joy to have the brothers bear witness to how truly you walk in the path of truth. Nothing delights me more than to hear that my children are walking this path.

Beloved, you demonstrate fidelity by all that you do for the brothers even though they are strangers; indeed, they have testified your love before the church. And you will do a good thing if, in a way that pleases God, you help them to continue their journey. It was for the sake of the Name that they set out, and they are accepting nothing from the pagans. Therefore, we owe it to such men to support them and thus to have our share in the work of truth.

I did write to the church; but Diotrephes, who enjoys being their leader, ignores us. Therefore, if I come I will speak publicly of what he is doing in spreading evil nonsense about us. And that is not all. Not only does he refuse to welcome the brothers himself but he even hinders those who wish to do so and expels them from the church!

Beloved, do not imitate what is evil but what is good. Whoever does what is good belongs to God. Demetrius is one who gets a good testimonial from all, even from truth itself. We give our testimonial as well, and you know that our testimony is true.

There is much more that I had in mind to write, but I do not wish to write it out with pen and ink. Rather, I hope to see you soon, when we can talk face to face.

Peace be with you. The beloved here send you their greetings; greet the beloved there, each by name.

At that time as Jesus approached Bethpage and Bethany on the mount called Olives, he sent two of the disciples with these instructions: “Go into the village straight ahead of you. Upon entering it you will find an ass tied there which no one has yet ridden, Untie it and lead it back. If anyone should ask you, ‘Why are you untying the beast?’ say, ‘The Master has need of it.’”

They departed on their errand and found things just as he had said. As they untied the ass, its owners said to them, “What are you doing that?” They explained that the Master needed it. Then they led the animal to Jesus, and laying their cloak on it, helped him mount. They spread their cloaks on the roadway as he moved along; and on his approach to the descent from Mount Olives, the entire crowd of disciples began to rejoice and praise God loudly for the display of power they had seen, saying: “Blessed is he who comes as king in the name of the Lord! Peace in heaven and glory in the highest!” Some of the Pharisees in the crowd said to Jesus, “Teacher, rebuke your disciples.” Jesus replied, “If they were to keep silence, I tell you the very stones would cry out.”

The day of Unleavened Bread arrived on which it was appointed to sacrifice the paschal lamb. Accordingly, Jesus sent Peter and John off with the instructions, “Go and prepare our Passover supper for us.” They asked him, “Where do you want us to get it ready?” Jesus explained to them: “Just as you enter the city, you will come upon a man carrying a water jar. Follow him into the house he enters, and say to the owner, ‘The Teacher asks you: Do you have a guest room where I may eat the Passover with my disciples?’ That man will show you an upstairs room, spacious and furnished. It is there you are to prepare.” They went off and found everything just as he had said; and accordingly they prepared the Passover supper.

When the hour arrived, Jesus took his place at the table, and the apostles with him. He said to them: “I have greatly desired to eat this Passover with you before I suffer. I tell you, I will not eat again until it is fulfilled in the kingdom of God.”

Then taking a cup he offered a blessing in thanks and said: “Take this and divide among you; I tell you, from now on I will not drink of the fruit of the vine until the coming of the reign of God.”

Then, taking bread and giving thanks, he broke it and gave it to them, saying: “this is my body to be given for you. Do this as a remembrance of me.” He did the same with the cup after eating, saying as he did so: “this cup is the new covenant in my blood, which shall be said for you.

“ And yet the hand of my betrayer is with me at this table. The Son of Man is following out his appointed course, but woe to that man by whom he is betrayed.” Then they began to dispute among themselves as to which of them would do such a deed.

A dispute arose among them about who should be regarded as the greatest. Jesus said: “Earthly kings lord it over their people. Those who exercise authority over them are called their benefactors. Yet it cannot be that way with you. Let the greater among you be as the junior, the leader as the servant. Who, in fact, is the greater – he who reclines at table or he who serves the meal? Is it not the one who reclines at table? Yet I’m in your midst as the one who serves you. You are the ones who have stood loyal by me in my Temptations. I for my part assigned to you the dominion my Father has assigned to me. In my kingdom you will eat and drink at my table, and you will sit on thrones judging the twelve tribes of Israel.

“Simon, Simon! Remember that Satan has asked for you, to sift you all like wheat. But I have prayed for you that your faith may never fail. You intern my strength and your brothers.” Peter said to Jesus, “Lord, at your side I am prepared to face imprisonment and death itself.” Jesus replied, “I tell you, Peter, the cock will not crow today until you have three times denied that you know me.”

Jesus asked them, “when I sent you on mission without purse or traveling bag or sandals, were you in need of anything?” “Not a thing,” they replied. He said to them: “Now, however, the man who has a purse must carry it; the same with the traveling bag. And the man without a sword must sell his coat and buy one. It is written in scripture, ‘He was counted among the wicked.’ and this, I tell you, must come to be fulfilled in me. All that has to do with me approaches its climax.” They said, “Lord, here are two swords!” He answered, “Enough.”

Then Jesus went out and made his way, as was his custom, to the Mount of Olives; his disciples accompanied him.