Feb. 22 The finding of the Venerable Relics of the Martyrs of Eugenius 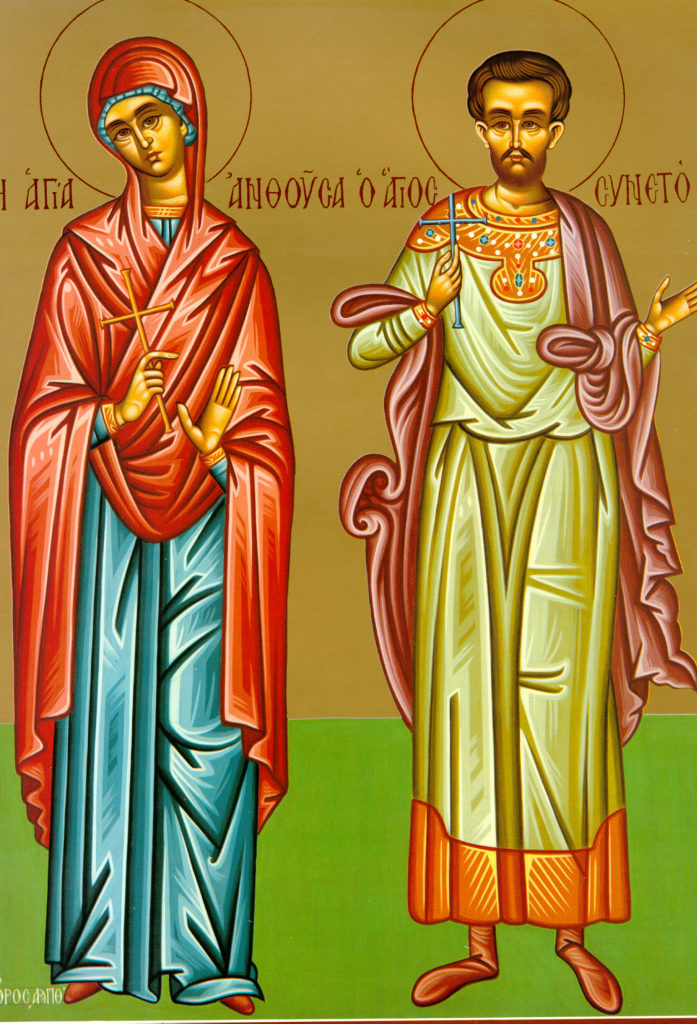 During the persecution against Christians the relics of holy martyrs were usually buried by believers in hidden places. So at Constantinople, near the gates and tower in the Eugenius quarter, the bodies of several martyrs were found. Their names remain unknown by the Church. When miracles of healing began to occur at this spot, the relics of the saints were discovered and transferred to a church with great honor. It was revealed to a pious clergyman, Nicholas Kalligraphos, that among the relics discovered at Eugenius were the relics of the holy Apostle Andronicus of the Seventy and his helper Junia. In the twelfth century, a great domed church was built on the spot where the relics were discovered. This work was undertaken by the emperor Andronicus, whose patron saint was the holy Apostle Andronicus.

O Lord our God,  your holy martyrs have deserved the crown of immortality on account of their good fight. Armed with your strength, they have vanquished their persecutors and crushed Satan’s dreadful might. Through their supplications, O Christ our God, save our souls.

O mighty pillars of faith and martyrs fighting for truth, you endured a host of pain for the sake of Christ, and you lay hidden for so long. Now you have been uncovered like a hidden treasure and are carried into the church by the bishop. You are generous with those who honor you. Therefore, pray for the salvation of our souls.

Jude, a servant of Jesus Christ and brother of James, to those who have been called by God; who have found love in God the Father and have been guarded safely in Jesus Christ. May mercy, peace, and love be yours in ever greater measure.

I was already fully intent on writing you, beloved, about the salvation we share. But now I feel obliged to write and encourage you to fight hard for the faith delivered once for all to the saints. Certain individuals have recently wormed their way into your midst, godless types, long ago destined for the condemnation I shall describe. They pervert the gracious gift of our God to sexual excess and deny Jesus Christ, our only master and Lord.

I wish to remind you of certain things, even though you may already be very well aware of them. The Lord first rescued his people from the land of Egypt but later destroyed those who refused to believe. There were angels, too, who did not keep to their own domain, who deserted their dwelling place. These the Lord has kept in perpetual bondage, shrouded in murky darkness against the judgment of the great day. Sodom, Gomorrah, and the towns there abouts indulged in lust, just as those angels did; they practiced unnatural vice. They are set before us to dissuade us, as they undergo a punishment of eternal fire.

Similarly, these visionaries pollute the flesh; they spurn God’s dominion and revile the angelic beings. Even the archangel Michael, when his case with the devil was being judged – a dispute over Moses’ body – did not venture to charge him with blasphemy. He simply said, “May the Lord punish you.” These people, however, not only revile what they have no knowledge of but are corrupted through the very things they know by instinct, like brute animals.

At that time Jesus went out and made his way, as was his custom, to the Mount of Olives; his disciples accompanied him. On reaching the place he said to them, “Pray that you may not be put to the test.” He withdrew from them about a stone’s throw, then went down on his knees and prayed in these words: “Father, if it is your will, take this cup from me; yet not my will but yours be done.”

Then Jesus rose from prayer and came to his disciples, only to find them asleep, exhausted with grief. He said to them, “Why are you sleeping? Wake up, and pray that you may not be subjected to the trial.”

While he was still speaking a crowd came, led by the man named Judas, one of the Twelve. He approached Jesus to embrace him. Jesus said to him, “Judas, would you betray the Son of Man with a kiss?” When the companions of Jesus saw what was going to happen, they said, “Lord, shall we use the sword?” One of them went so far as to strike the high priest’s servant and cut off his right ear. Jesus said in answer to their question, “Enough!” Then he touched the ear and healed the man. But to those who had come out against him – the chief priests, the chiefs of the temple guards, and the ancients – Jesus said, “Am I a criminal that you come after me armed with swords and clubs? When I was with you day after day in the temple you never raised a hand against me. But this is your hour – the triumph of darkness!”

They led Jesus away under arrest and brought him to the house of the high priest, while Peter followed at a distance. Later they lighted a fire in the middle of the courtyard and were sitting beside it, and Peter sat among them. A servant girl saw him sitting in the light of the fire. She gazed at him intently, then said, “This man was with him.” Peter denied the fact, saying, “Woman, I do not know him.” A little while later someone else saw him and said, “You are one of them too.” But Peter said, “No, sir, not I!” About an hour after that another spoke more insistently: “This man was certainly with him, for he is a Galilean.” Peter responded, “My friend,  I do not know what you are talking about.” At the very moment he was saying this, a cock crowed. The Lord turned around and looked at Peter, and Peter remembered the word that the Lord had spoken to him, “Before the cock crows today you will deny me three times.” Peter went out and wept bitterly.

Meanwhile the men guarding Jesus amused themselves at his expense. They blindfolded him first, slapped him, and then taunted him: “Play the prophet; which one struck you?” And they directed many other insulting words at him.

At daybreak, the elders of the people, the chief priests, and the scribes assembled again. Once they had brought him before their council, they said, “Tell us, are you the Messiah?” Jesus replied, “If I tell you, you will not believe me, and if I question you, you will not answer. This much only I will say: ‘From now on, the Son of Man will have his seat at the right hand of the Power of God.’” “So you are the Son of God?” they asked in chorus. He answered, “It is you who say I am.” They said, “What need have we of witnesses? We have heard it from his own mouth.” Then the entire assembly rose up and led him before Pilate.