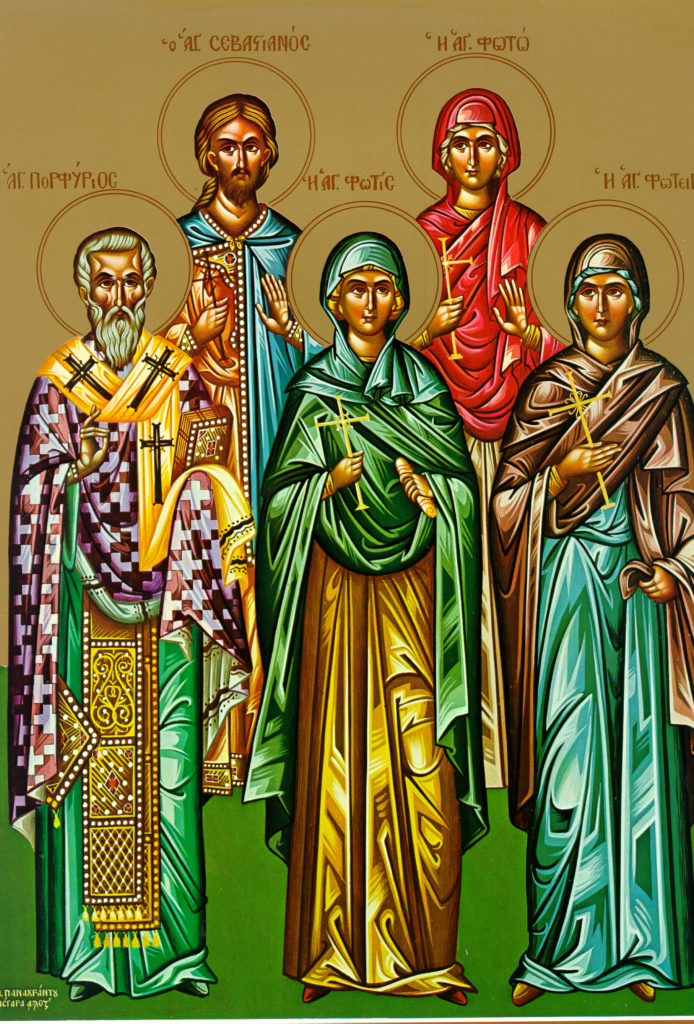 St. Porphyrius, Archbishop of Gaza was born in the year 346. He grew up with wealthy parents, but was drawn to monastic life. He left home at the age of twenty five  and set off for Egypt, where he lived in the desert under the guidance of St. Macarius the Great. He made a pilgrimage to Jerusalem to see all the holy places, and to venerate the Life-Giving Cross of the Lord. He moved into a cave in the Jordanian wilderness for prayer and ascetic deeds. St. Porphyrius was summoned from his cave by Metropolitan John to become the next bishop of Gaza. Gaza needed a bishop who could contend against the pagans, which were predominant there and were harassing the local Christians. The Lord inspired the Metropolitan to call for his priest Porphyrius to uphold Christianity in Gaza. Porphyrius did just that to the very end of his life, and he guarded his flock from the vexatious pagans. The holy archpastor guided his flock for twenty five years, and fell asleep in the Lord in the year 420.

Who can recount all your works and sufferings of piety? You never stopped working day or night until you washed Gaza clean of impurity and replaced its evil ways with sound holiness. You are a constant guardian over your flock. Now beg Christ to save our souls, O Porphyrius.

You were splendid in the robes of the priesthood, adorned with your priestly virtue, O blessed saint. You dispense treasures of cures, O wise-in-God, praying unceasingly on our behalf, O Porphyrius.

Brothers and sisters: Let us, then, make it our aim to work for peace and to strengthen one another. Take care not to destroy God’s work for the sake of something to eat. True, all foods are clean, but it is wrong for a man to eat when the food offends his conscience. You would be acting nobly if you abstained from eating meat, or drinking wine, or anything else that offers your brother an occasion for stumbling or scandal, or that weakens him in any way. Use the faith you have as your rule of life in the sight of God. Happy the man whose conscience does not condemn what he has chosen to do! But if a man eats when his conscience has misgivings about eating, he is already condemned, because he is not acting in accordance with what he believes. Whatever does not accord with one’s beliefs is sinful.

Now to him who is able to strengthen you in the gospel which I proclaim when I preach Jesus Christ, the gospel which reveals the mystery hidden for many ages but now manifested through the writings of the prophets, and, at the command of the eternal God, made known to all the Gentiles that they may believe and obey – to him, the God who alone is wise, may glory be given through Jesus Christ unto endless ages. Amen.

The Lord saint, “Be on guard against performing religious acts for people to see. Otherwise expect no recompense from your heavenly Father. When you give alms, for example, do not blow a horn before you in synagogues and streets like hypocrites looking for applause. You can be sure of this much, they are already repaid. In giving alms you are not to let your left hand know what your right hand is doing. Keep your deeds of mercy secret and your Father who sees in secret will repay you.

“When you are praying, do not behave like the hypocrites who love to stand and pray in the synagogues or on the street corners in order to be noticed. I give you my word, they are already repaid. Whenever you pray, go to your room, close your door, and pray to your Father in private. Then your Father, who sees what no man sees, will repay you. In your prayer do not rattle on like the pagans. They think they will win a hearing by sheer multiplication of words. Do not imitate them. Your Father knows what you need before you ask him. This is how you are to pray:’Our Father in heaven hallowed be your name, your kingdom come, your will be done on earth as it is in heaven. Give us this day our daily bread, and forgive us the wrong we have done as we forgive those who wrong us. Subject us not to the trial but deliver us from the evil one.’”