Jan. 05 The Holy Martyrs Theopemptus and Theona; Our Venerable Mother Syncletica of Alexandria in Egypt; The Holy Prophet Micah 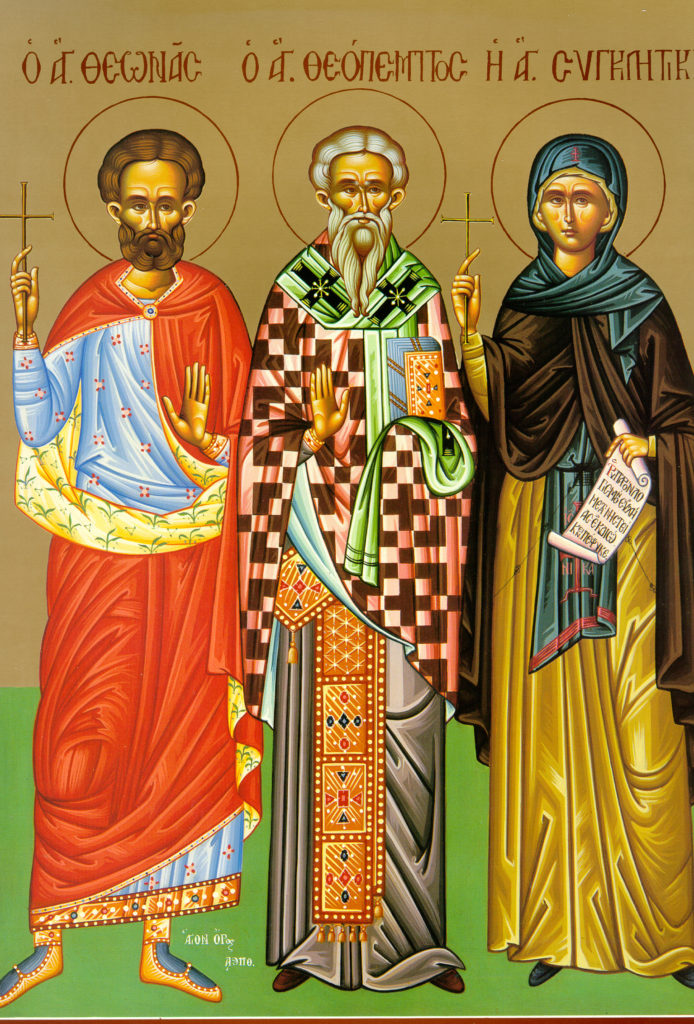 The holy martyrs Theopemptus and Theona, of Nicomedia in Bithynia, who met martyrdom in the persecution of the Emperor Diocletian (c. 350)

Our venerable mother Syncletica of Alexandria in Egypt, virgin, who is to have led a solitary life that influenced many women of her day. (4th century)

The holy prophet Micah, who in the days of Jotham, Ahaz, and Hezekiah, kings of Judah, by his preaching defended the oppressed, and condemned idols and depravities. He announced to the chosen people that a leader would be born in Bethlehem of Jude, who would shepherd Israel in the strength of the Lord.

In you, O mother, the divine image was strictly preserved; taking up your cross, you followed Christ. You taught us by example how to spurn the flesh, for it passes away, and how to care for the soul, which is immortal. Therefore, O venerable Syncletica, your soul rejoices with the angels.

These martyrs have become a means of holiness to those on earth. How well they endured the agony imposed by the torturer. They rejoice in the Lord and sing out: We adore Him who buried the sins of all in the flowing waters of the Jordan.

You endured the pain of your suffering by fasting. You are delighted to find a finer dwelling in heaven and have been filled with more splendid light because you followed Christ so courageously along the difficult path. You turned away from the goods of earth and became like an angel. Now you share in their glory.

Brothers and sisters: Although I am not bound to anyone, I made myself the slave of all so as to win over as many as possible. I became like a Jew to the Jews in order to win the Jews. To those bound by the law I became like one who is bound (although in fact I am not bound by it), that I might win those bound by the law. To those not subject to the law I became like one not subject to it (not that I am free from the law of God, for I am subject to the law of Christ), that I might win those not subject to the law. To the weak I became a weak person with a view to winning the weak. I have made myself all things to all men in order to save at least some of them. In fact, I do all that I do for the sake of the gospel in the hope of having a share in its blessings.

You know that while all the runners in the stadium take part in the race, the award goes to one man. In that case, run so as to win! Athletes deny themselves all sorts of things. They do this to win a crown of leaves that wither, but we a crown that is imperishable.

I do not run like a man who loses sight of the finish line. I do not fight as if I were shadowboxing. What I do is discipline my own body and master it, for fear that after having preached to others I myself should be rejected.

In the fifteenth year of the rule of Tiberius Caesar, when Pontius Pilate was procurator of Judea, Herod tetrarch of Galilee, Philip his brother tetrarch of the region of Ituraea and Trachonitis, and Lysanias tetrarch of Abilene, during the high-priesthood of Annas and Caiphas, the word of God was spoken to John, son of Zechariah, in the desert. He went about the entire region of the Jordan proclaiming a baptism of repentance which led to the forgiveness of sins, as is written in the book of the words of Isaiah the prophet: “A herald’s voice in the desert, crying, ‘Make ready the way of the Lord, clear him a straight path. Every valley shall be filled and every mountain and hill shall be leveled. The windings shall be made straight and the rough ways smooth, and all mankind shall see the salvation of God.’”

John would say to the crowds that came out to be baptized by him: “You brood of vipers! Who told you to flee from the wrath to come? Give some evidence that you mean to reform. Do not begin by saying to yourselves, ‘Abraham is our father.’ I tell you, God can raise up children to Abraham from these stones. Even now the ax is laid to the root of the tree. Every tree that is not fruitful will be cut down and thrown into the fire.”

The crowds asked him, “What ought we to do?” In reply, John said, “Let the man with two coats give to him who has none. The man who has food should do the same.”

Tax collectors also came to be baptized, and they said to him, “Teacher, what are we to do?” He answered them, “Exact nothing over and above your fixed amount.”

Soldiers likewise asked him, “What about us?” He told them, “Don’t bully anyone. Denounce no one falsely. Be content with your pay.”

The people were full of anticipation, wondering in their hearts whether John might be the Messiah. John answered them all by saying: “I am baptizing you in water, but there is one to come who is mightier than I. I am not fit to loosen his sandal strap. He will baptize you in the Holy Spirit and in fire. His winnowing-fan is in his hand to clear his threshing floor and gather the wheat into his barn; but the chaff he will burn in unquenchable fire.” Using exhortations of this sort, he preached the good news to the people.