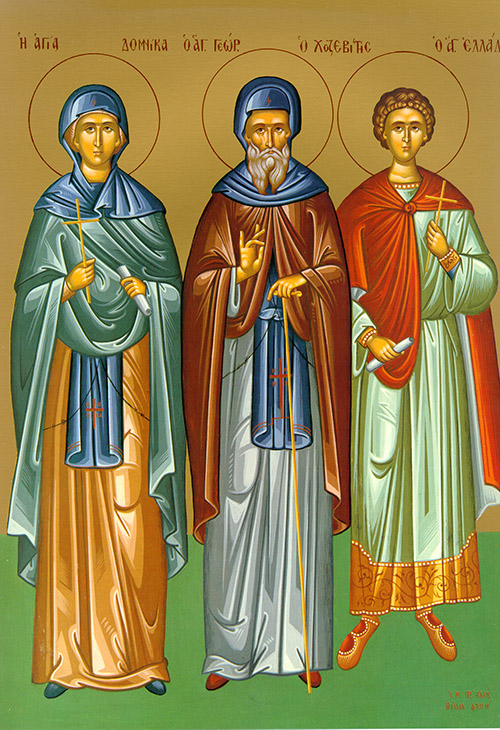 Our venerable father Emilian the Confessor was a native of Vannes, in what is now France. He was a recluse (767)

Our venerable mother Dominica, born in Carthage in North Africa, lived a life of asceticism and died in Constantinople under the reign of the Emperor Zenon in 474.

Come, O people and piously honor the memory of George. Sing praises for his wonderful fasting and praise Emilian for his teachings. Let us sing out: Save our souls, O Christ, through the intercession of these holy monks.

In you, O mother, the divine image was strictly preserved; taking up your cross, you followed Christ. You taught us by example how to spurn the flesh for it passes away, and how to care for the soul, which is immortal. Therefore, O venerable Dominica, your soul rejoices with the angels.

O George, you have become a brilliant source of light, enlighten all those who come to you in faith. Intercede for us with Christ our God who appeared in flowing waters and enlightened all of us.

O Dominica, you crucified the flesh with your suffering, and your love for Christ was sure and constant. For this you have been crowned and admitted to the choirs of angels. Pray now for all those who venerate you, O mother.

Brothers and sisters: Each of us has received God’s favor in the measure in which Christ bestows it. Thus you find Scripture saying: “When He ascended on high, he took a host of captives and gave gifts to men.” “He ascended”- what does this mean but that he had first descended into the lower regions of the earth? He who descended is the very one who ascended above the heavens, that he might fill all men with his gifts.

It is He who gave apostles, prophets, evangelists, pastors and teachers in roles of service for the faithful to build up the body of Christ, till we become one in faith and in the knowledge of God’s Son, and form that perfect man who is Christ come to full stature.

At that time when Jesus heard that John had been arrested, he withdrew to Galilee. He left Nazareth and went down to line in Capernaum by the sea near the territory of Zebulun and Naphtali, to fulfill what had been said through Isaiah the prophet: “Land of Zebulun, land of Naphtali along the sea beyond the Jordan, heathen Galilee: A people living in darkness has seen a great light. On those who inhabit a land overshadowed by death, light has arisen.” From that time on Jesus began to proclaim this theme: “Reform your lives! The kingdom of heaven is at hand.”