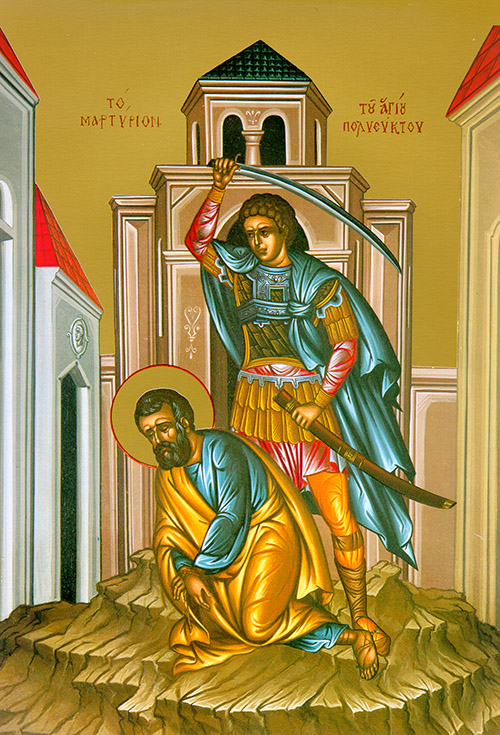 The holy martyr Polyeuctus: The Armenian city of Melitene was drenched with the blood of Christians, as was the entire country of Armenia. The first blood shed for Christ in this city was that of St. Polyeuctus in the year 259, during the reign of Valerian. In Melitene were two friends: Nearchus and Polyeuctus. Both were officers- Nearchus was baptized and Polyeuctus was unbaptized. When the command of the emperor was sent out concerning the persecution of Christians, Nearchus prepared for death; but he was in great sorrow because he had not succeeded in converting his friend Polyeuctus to the true Faith. When Polyeuctus learned of the reason for Nearchus’s sorrow, he promised to embrace the Faith. The following day Polyeuctus related this dream to Nearchus: the Lord Himself had appeared to him in light, removed Polyeuctus’s old clothes from him and dressed him in radiant new clothes – and sat him in the saddle of a winged horse. After this, Polyeuctus went to town, shredded the emperor’s decree concerning the torturing of Christians, and destroyed many statues of idols. He was tortured and condemned to death. When he was brought to the place of execution, he looked at Nearchus in the throng of people and joyfully cried out to him: “Save yourself, my dear friend! Remember the vow of love confirmed between the two of us!” later, St. Nearchus died by fire as a martyr for Christ.

Your martyr Polyuectus, O Lord our God, in his struggle received an incorruptible crown from You. With Your strength, he brought down the tyrants and broke the cowardly valor of demons. Through his prayers, O Christ our God, save our souls.

When our Savior bowed His head in the Jordan River, the heads of the serpents were crushed, and when Polyeuctus was beheaded, he put demons to shame.

To such a person one might say, “You have faith and I have work– is that it?” Show me your faith without works, and I will show you the faith that underlies my works! Do you believe that God is one? You are quite right. The demons believe that, and shudder. Do you want proof, you ignoramus, that without works faith is idle? Was not out father Abraham justified by his works when he offered his son Isaac on the altar? There you see proof that faith was both assisting his works and implemented by his works. You also see how the Scripture was fulfilled which says, “Abraham believed God, and it was credited to him as justice”: for this he received the title “God’s friend.”