Jan. 14 Our Venerable Fathers of Sinai and Raitho, killed by Arabs 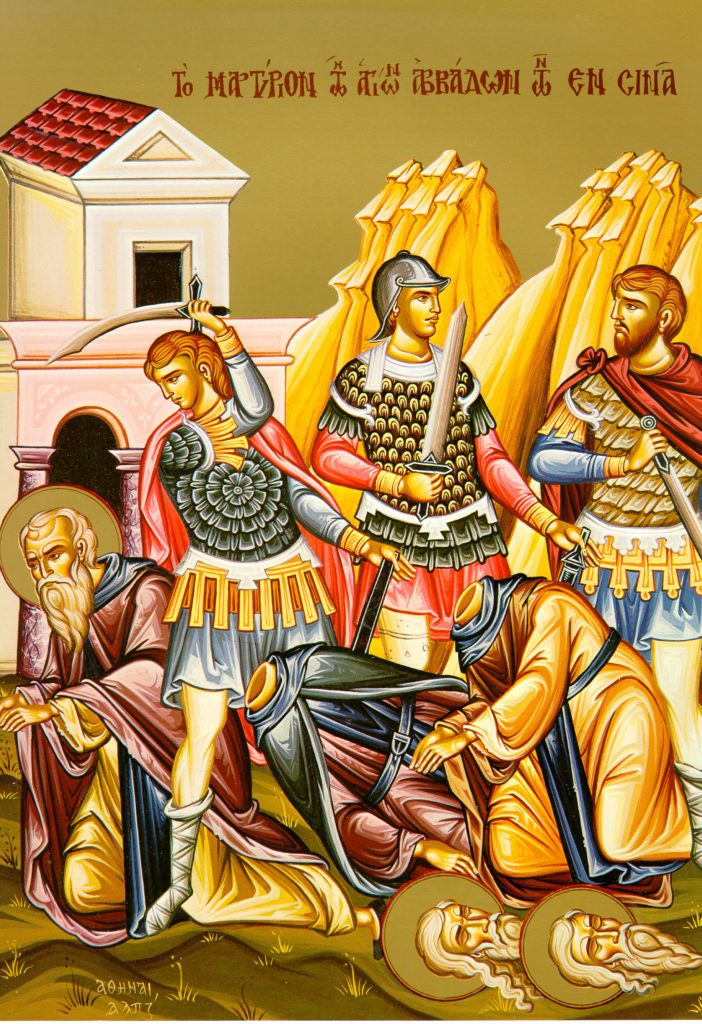 There were two occasions when the monks and hermits of Sinai and Raitho were murdered by the barbarians. The first took place in 312 when forty Fathers were killed at Mt. Sinai, and thirty-nine were slain at Raitho the same day. The second massacre occurred nearly a hundred years later.

God of our father, You always deal with us in Your kindness. Take not Your mercy away from us; but through their prayer guide our life in peace.

You fled the fury of the world and found for yourselves a calm haven. You were crowned with martyrs’ blood by the yoke of fasting; for this you have been admitted into the company of martyrs and monks.

Paul, an apostle of Christ Jesus by the will of God, and Timothy our brother, to the holy ones at Colossae, faithful brothers in Christ. May God our Father give you grace and peace.

We always give thanks to God, the Father our Lord Jesus Christ in our prayers for you because we have heard of your faith in Christ Jesus and the love you bear toward all the saints – moved as you are by the hope held in store for you in heaven. You heard of this hope through the message of truth, the gospel, which has to come to you, has borne fruit, and has continued to grow in your midst, as it has everywhere in the world. This has been the case from the day you first heard it and comprehended God’s gracious intention.

The Lord told this parable: “The reign of God can be likened to ten brides-maids who took their torches and went out to welcome the groom. Five of them were foolish, while the other five were sensible. The foolish ones, in taking their torches, brought no oil along, but the sensible ones took flasks of oil as well as their torches. The groom delayed his arrival, so they all began to nod, then to fall asleep. At midnight someone shouted, ‘The groom is here! Come out and greet him!’ At the outcry all the virgins woke up and got their torches ready. The foolish ones said to the sensible ones, ‘Give us some of your oil. Our torches are going out.’ But the sensible ones replied, ‘No, there may not be enough for you and us. You had better go to the dealers and buy yourselves some.’ While they went off to buy it the groom arrived, and the ones who were ready went in to the wedding with him. Then the door was barred. Later the other bridesmaids came back. ‘Master, master!’ they cried. ‘Open the door for us.’ But he answered, ‘I tell you, I do not know you.’ The moral is: keep your eyes open, for you know not the day or the hour [when the Son of Man will come.]”