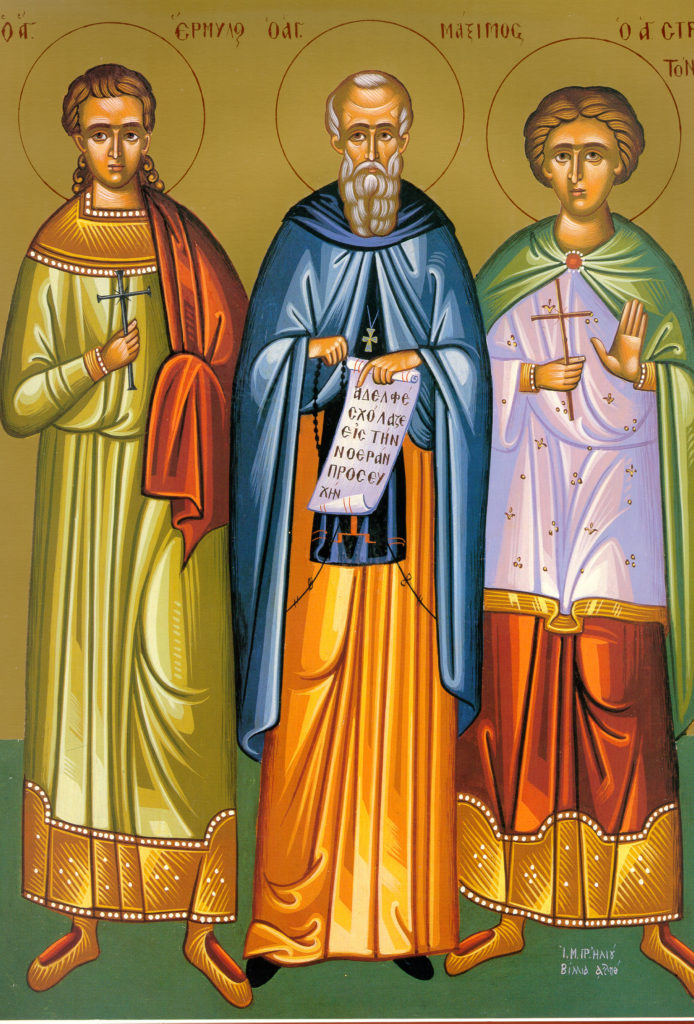 The Emperor Licinius raised a great persecution of Christians. St. Hermolaus, a Christian and a deacon in the Church, was arrested and brought to trial. When Hermolaus was informed that he was being led away to be tortured, he greatly rejoiced. In vain did the emperor threaten him. Hermolaus openly confessed his faith in Christ, and responded to all the threats of the emperor saying: The Lord is with me; I fear not; What can man do against me? (psalm 118:6). Following excruciating tortures, Hermolaus was thrown into a dungeon. The guard was Strantonicus, a secret Christian, who sympathized with the suffering of Hermolaus with all his heart. When it was reported to the emperor that Stratonicus was also a Christian, the emperor ordered that both of them be drowned in the Danube River. Then the executioners tied Hermolaus and Stratonicus in a net, and both were drowned. Three days later, their bodies washed ashore. Christians discovered their bodies and buried them about eighteen miles from Belgrade in the year 315.

Your martyrs, O Lord our God, in their struggles received incorruptible crowns from You. With Your strength, they brought down the tyrants and broke the cowardly valor of demons.

Through their prayers, O Christ our God, save our souls.

O martyrs, you both met a blessed end in water and drowned the devil by the grace of God. You have received crowns of triumph for this and have been admitted to angelic choirs. Now remember those who honor you.

Brothers & sisters: We know that God makes all things work together for the good of those who love God and are called according to his decree. Those whom he foreknew he predestined to share the image of his Son, that the Son might be the first-born of many brothers. Those he predestined he likewise called; those he called he also justified; and those he justified he in turn glorified. What shall we say after that? If God is for us, who can be against us? Is it possible that he who did not spare his own Son but handed him over for the sake of us all will not grant us all things besides? Who shall bring a charge against God’s chosen ones? God, who justifies? Who shall condemn them? Christ Jesus, who died or rather was raised up, who is at the right hand of God and who intercedes for us?

At that time as Jesus was making his way out of the temple area, one of his disciples said to him, “Teacher, look at the huge blocks of stone and the enormous building!” Jesus said to him, “You see these great buildings? Not one stone will be left upon another– all will be torn down.” While he was seated on the Mount of Olives facing the temple, Peter, James, and Andrew began to question him privately. “Tell us, when will this occur? What will be the sign that all this is coming to an end?”

Jesus began his discourse: “Be on your guard. Let no one mislead you. Any number will come attempting to impersonate me. ‘I am he,’ they will claim, and will lead many astray. When you hear about wars and threats of war, do not yield to panic. Such things are bound to happen, but this is not yet the end. Nation will rise against nation, one kingdom against another. There will be earthquakes in various places and there will be famine. This is but the onset of the pains of labor.”