Jan. 20 Our Venerable and God-bearing Father Euthymius the Great 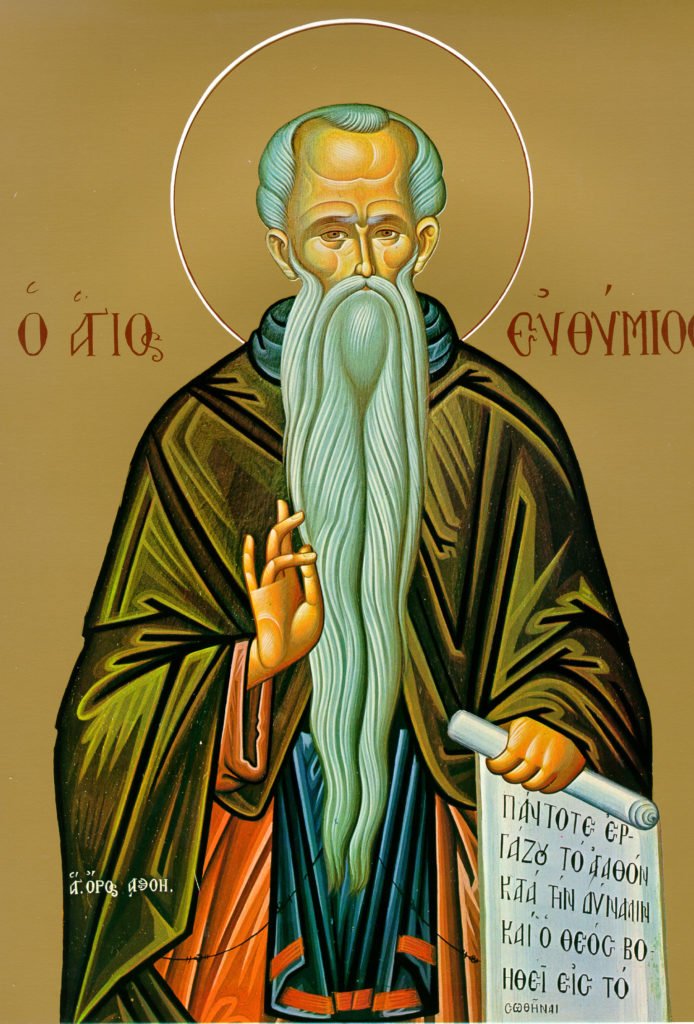 Our venerable and divinely inspired father, Euthymius the Great, Hegumen-Abbot, lived in the fifth century in Melitene in Armenia. His parents were devout Christians of noble birth. However, even after many years of marriage, they were childless. In their sorrow, they entreated God to give them a child. They had a vision and heard a voice tell them: “Be of good cheer! God will grant you a son, who will bring joy to the churches.” They named their son Euthymuis which means “good cheer.” St. Euthymius became a monk and was ordained to the priesthood. He was entrusted with the supervision  of all the monasteries in the city. He frequently visited the monastery of St. Polyeuctus, and during the Great Fast he withdrew  to the wilderness. Feeling the great weight of his responsibilities for the monasteries conflicting with his desire for stillness, St. Euthymius secretly left the city and set out for Jerusalem. After venerating the holy shrines, he visited the Fathers in the desert. He settled into a solitary cell in the monastery in Tharan where he lived the rest of his life until he died at the age of ninety-seven.

Joy to you, O barren wilderness; rejoice, sterile desert that has never known the travail of birth; for your spouse has multiplied your children. He has planted them in devotion and piety, and made them grow in detachment for the sake of perfect virtue. Through his supplications, Christ our God, give peace to our lives.

Creation takes you in your birth and memory. It is delighted with the abundance of your miracles. Enrich our souls from your treasures, O father, and wash our defilements away so that we can sing: Alleluia!

At that time, coming down the mountain with the twelve, Jesus stopped at a level stretch where there were many of his disciples; a large crowd of people was with them from all Judea and Jerusalem and the coast of Tyre and Sidon, people who came to hear him and be healed of this diseases. Those who were troubled with unclean spirits were cured; indeed, the whole crowd was trying to touch him because power went out from him which cured all.

Then, raising his eyes to his disciples, he said: “Blest are you poor, the reign of God is yours. Blest are you who hunger; you shall be filled. Blest are you who are weeping; you shall laugh. Blest shall you be when men hate you, when they ostracize you and insult you and proscribe your name as evil because of the Son of Man. On the day they do so, rejoice and exult, for your reward shall be great in heaven.”

At that time Jesus began to address the chief priests, the scribes, and the elders once more in parables: “A man planted a vineyard, put a hedge around it, dug a vat, and erected a tower. Then he leased it to tenant farmers and went on a journey. In due time he dispatched a man in her service to the tenants to obtain from them his share of produce from the vineyard. But the tenants seized the servant, beat him, and sent him off empty-handed. The second time he sent them another servant; him too they beat over the head and treated shamefully. He sent yet another and they killed him. So too with many others: some they beat; some they killed. He still had one to send – the son whom he loved. He sent him to the tenants as a last resort, thinking, ‘They will have to respect my son.’ But those tenants said to one another, ‘Here is the one who will inherit everything. Come, let us kill him, and the inheritance will be ours.’ Then they seized and killed him and dragged him outside the vineyard. What do you suppose the owner of the vineyard will do? He will come and destroy those tenants and turn his vineyard over to others. Are you not familiar with the passage of Scripture: ‘The stone rejected by the builder has become the keystone of the structure. It was the Lord who did it and we find it marvelous to behold’?”

They wanted to arrest him at this, yet they had reason to fear the crowd. (They knew well enough that he meant the parable for them.) Finally they left him and went off.