Jan 26. Our Venerable Father Xenophan and his wife Mary 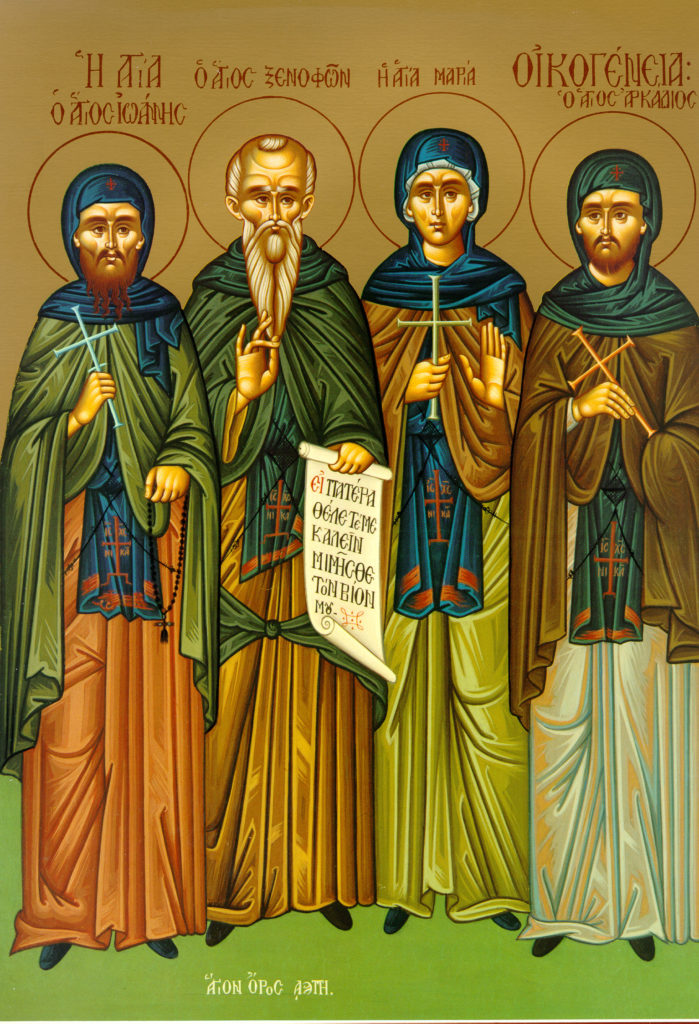 Our venerable father Xenophan and his wife Mary: Xenophan was a senator in Constantinople, where he led a holy Christian life with his wife Mary and their two sons, Arcadius and John. On their way to Phoenicia to study, the young men were shipwrecked and barely managed to escape with their lives. The parents set out to find them, and, on discovering them in a monastery in Jerusalem, they too entered the monastic life, equal to one another in the ardor of their souls.

You were attentive to the commandments of the Master, distributing your wealth secretly to the poor, O blessed one, with your wife and children. Therefore, you dwell in the divine paradise.

Dearly beloved: Do not be surprised that a trial by fire is occurring in your midst. It is a test for you, but it should not catch you off guard. Rejoice instead, in the measure that you share Christ’s sufferings. When his glory is revealed, you will rejoice exultantly. Happy are you when you are insulted for the sake of Christ, for then God’s Spirit in its glory has come to rest on you. See to it that none of you suffers for being a murderer, a thief, a malefactor, or a destroyer of another’s rights. If anyone suffers for being a Christian, however, he ought not to be ashamed. He should rather glorify God in virtue of that name. The season of judgment has begun, and began with God’s own household. If it begins this way with us, what must be the end for those who refuse obedience to the gospel of God? And if the just man is saved only with difficulty, what is to become of the godless and the sinner? Accordingly, let those who suffer as God‘s will requires continue in good deeds, and then trust their lives to a faithful creator.

To the elders among you I, a fellow elder, a witness of Christ suffering and sharer in the glory that is to be revealed, make this appeal. God’s flock is in your midst; give it a shepherd’s care. Watch over it willingly as God would have you do, not under constraint; and not for shameful profit either, but generously. Be examples to the flock, not lording it over those assigned to you, so that when the chief Shepherd appears you will win for yourselves the unfailing crown of glory.

In the same way, you younger men must be obedient to the elders. In your relations with one another, clothe yourselves with humility, because God, (as Scripture says) “is stern with the arrogant but to the humble he shows kindness.”

Taking a seat opposite a treasury, Jesus observed the crowd putting money into the collection box. Many of the wealthy put in sizable amounts; but one poor widow came and put in two small copper coins worth a few cents. Jesus called his disciples over and told them: “I want you to observe that this poor widow contributed more than all the others who donated to the treasury. They gave from their surplus wealth, but she gave from her want, all that she had to live on.”