Jan. 27 Translation of the Relics of our Holy Father John Chrysostom. 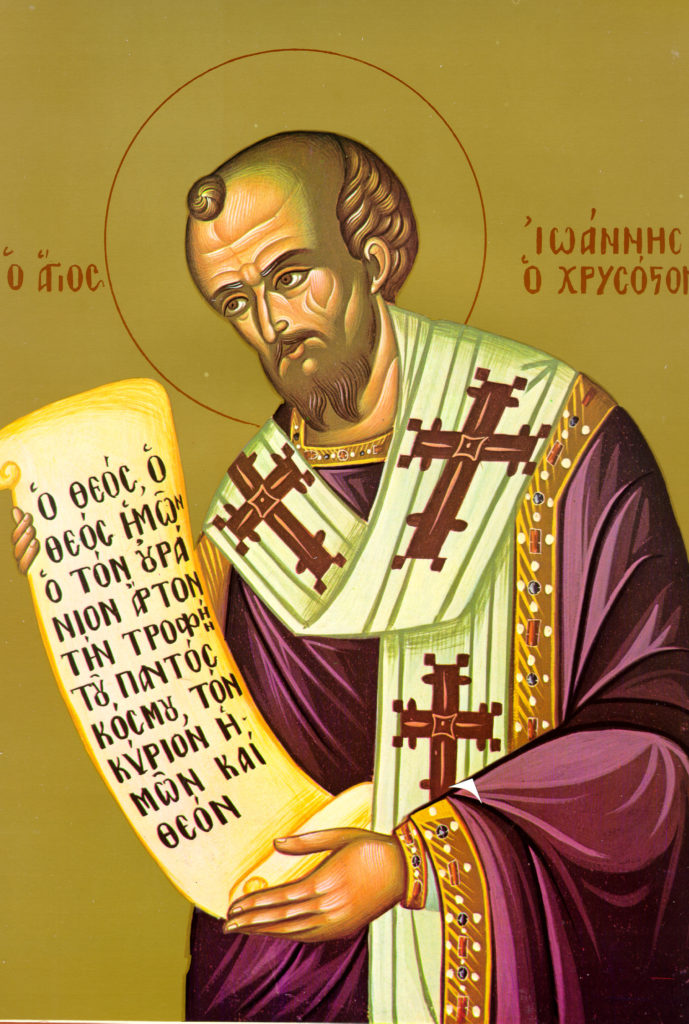 The Translation of the Precious Relics of our Father among the Saints John Chrysostom. In the year 438, thirty-three years after the death of St. John Chrysostom in Coman of Armenia, his relics were transferred to his episcopal see of Constantinople.

The holy church sings praise and the world rejoices. How joyful is the transfer of your sacred relics, O venerable pastor, John Chrysostom. You lived among pastors in holiness and became a martyr in your yearning. We therefore sing to you: O martyr and companion of pastors, beg Christ our God to save our souls.

The Church of Constantinople rejoiced greatly because of the transfer of your holy relics and she kept them as a treasure of great price. Through your intercession, these same remains convey the grace of healing upon those who sing to you a hymn of praise, O most glorious John Chrysostom.

The Lord said, “Truly I assure you: whoever does not enter the sheepfold through the gate but climbs in some other way is a thief and a marauder. The one who enters through the gate is shepherd of the sheep; the keeper opens the gate for him. The sheep hear his voice as he calls his own by name and leads them out. When he has brought out all those that are his, he walks in front of them, and the sheep follow him because they recognize his voice. They will not follow a stranger; such a one they will flee, because they do not recognize a stranger’s voice.”

Be patient, therefore, my brothers and sisters, until the coming of the Lord. See how the farmer awaits the precious yield of the soil. He looks forward to it patiently while the solid receives the winter and spring rains. You, too, must be patient. Steady your hearts, because the coming of the Lord is at hand. DO not grumble against one another, my brothers and sisters, lest you be condemned. See! The judge stands at the gate.

At that time Jesus and his disciples returned once more to Jerusalem. As he was walking in the temple precincts the chief priests, the scribes, and the elders approached him and said to him, “On what authority are you doing these things? Who has given you the power to do them?” Jesus said to them, “I will ask you a question. If you give me an answer, I will tell you on what authority I do the things I do. Tell me, was John’s baptism of divine origin or merely from men?” They thought to themselves, “If we say ‘divine,’ he will ask, “Then why did you not put faith in it?’ But can we say ‘merely human’?” (They had reason to fear the people, who all regarded John as a true prophet.) So their answer to Jesus was, “We do not know.” In turn, Jesus said to them, “Then neither will I tell you on what authority I do the things I do.”