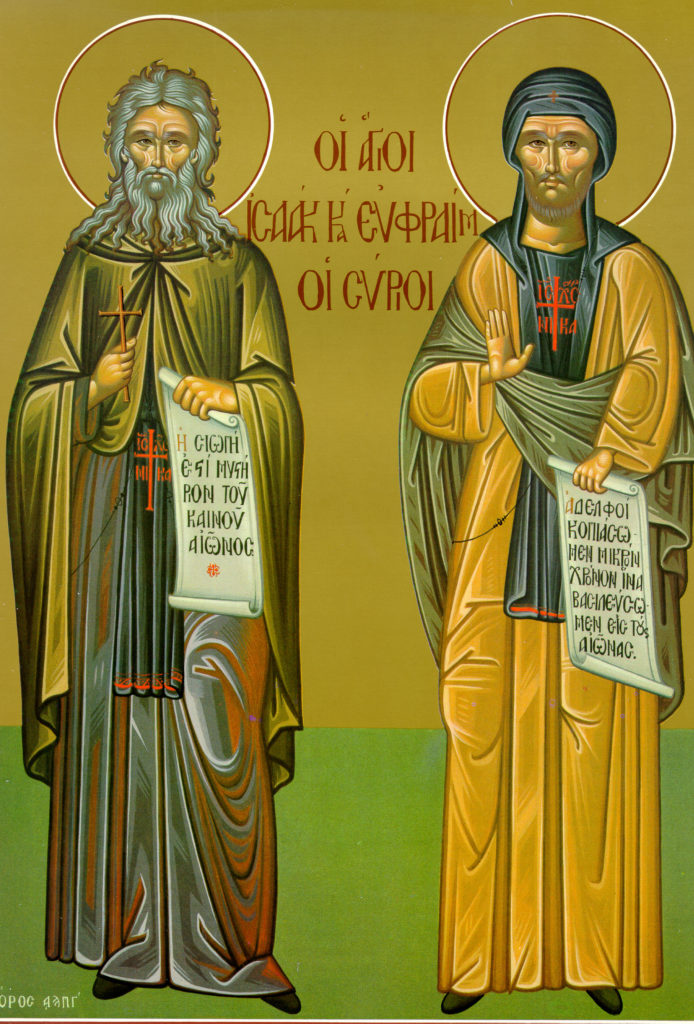 Our venerable father Ephrem the Syrian, Bishop of Nineveh, who, first in his own hometown of Nisibis, exercised the office of preaching and of handing on holy teaching. Then, when the Persians invaded Nisibis, he fled with his disciples to Edessa in Syria, where he set down the fundamentals of a school of theology, fulfilling his ministry by his words and writings. So striking is the austerity of his life and clarity of his teachings that from the exquisite hymns he composed he has deserved to be called the harp of the Holy Spirit.

Your abundant tears made the wilderness bloom, and your suffering made your labors fruitful a hundredfold; you became a shining torch over the world. O venerable father Ephrem, pray to Christ our God that He may save our souls.

Ever conscious of the hour of judgement, you shed tears of bitter lament, O Ephrem. Your activity embraced the life of silence which you loved so dearly. By your actions you have taught us. You have spurred the lazy to repentance.

Reading for the day

At that time Jesus began to address the chief priests, the scribes, and the elders once more in parables: “A man planted a vineyard, put a hedge around it, dug a vat, and erected a tower. Then he leased it to tenant farmers and went on a journey. In due time he dispatched a man in her service to the tenants to obtain from them his share of produce from the vineyard. But the tenants seized the servant, beat him, and sent him off empty-handed. The second time he sent them another servant; him too they beat over the head and treated shamefully. He sent yet another and they killed him. So too with many others: some they beat; some they killed. He still had one to send – the son whom he loved. He sent him to the tenants as a last resort, thinking, ‘They will have to respect my son.’ But those tenants said to one another, ‘Here is the one who will inherit everything. Come, let us kill him, and the inheritance will be ours.’ Then they seized and killed him and dragged him outside the vineyard. What do you suppose the owner of the vineyard will do? He will come and destroy those tenants and turn his vineyard over to others. Are you not familiar with the passage of Scripture: ‘The stone rejected by the builder has become the keystone of the structure. It was the Lord who did it and we find it marvelous to behold’?”

They wanted to arrest him at this, yet they had reason to fear the crowd. (They knew well enough that he meant the parable for them.) Finally they left him and went off.