Jan. 29 The translation of the Relics of the Holy Bishop and Martyr Ignatius of Antioch 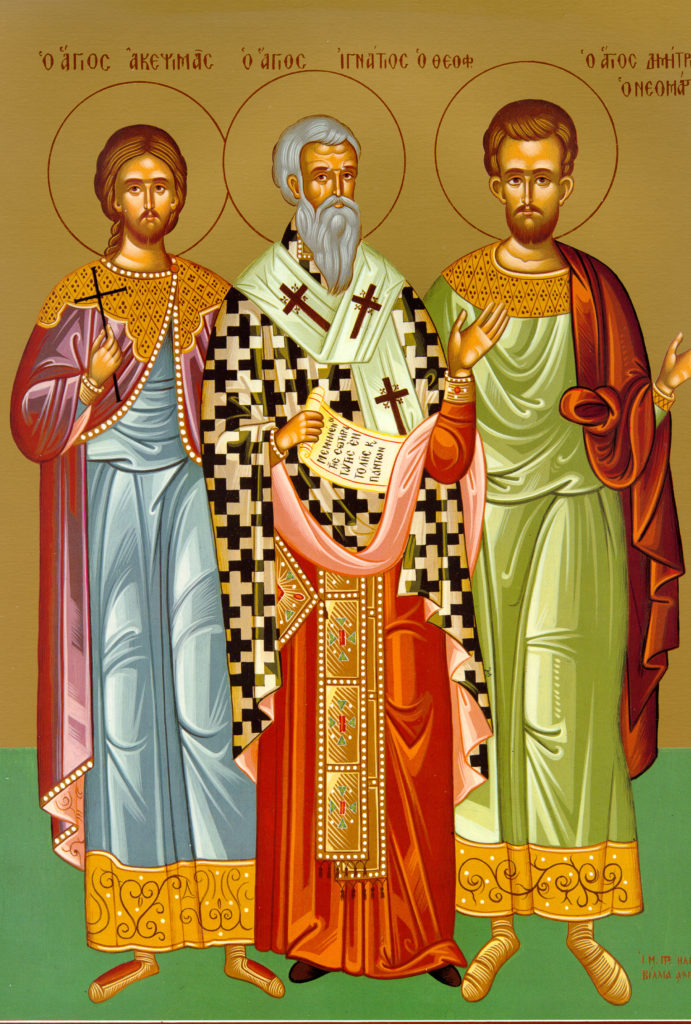 The translation of the Relics of the Holy Priest Martyr Ignatius the God-bearer, Bishop of Antioch. Ignatius was martyred in Rome at the beginning of the second century. His remains were later translated to Antioch, his birthplace and his episcopate. During the invasion of the Persians, the relics were once again taken from Antioch to Rome in the 6th century.

Having offered yourself as a sanctified gift to God, you were thrown to the ravenous animals. You received the crown of victory from God for this. Save those who honor you as a pastor for Christ. A teacher and a companion of martyrs.

Rising in the east today and enlightening all the world by your teachings, you were graced with martyrdom, O heavenly Ignatius.

Brothers and sisters: Since, then, we have a great high priest who has passed through the heavens, Jesus, the Son of God, let us hold fast to our profession of faith. For we do not have a high priest who is unable to sympathize with our weakness, but one who was tempted in every way that we are, yet never sinned. So let us confidently approach the throne of grace to receive mercy and favor and to find help in time of need.

Every high priest is taken from among men and made their representative before God, to offer gifts and sacrifices for sins. He is able to deal patiently with erring sinners, for he himself is beset by weakness and so must make sin offerings for himself as well as for the people. One does not take this honor on his own initiative, but only when called by God as Aaron was. Even Christ did not glorify himself with the office of high priest; he received it from the One who said to him, “You are my son; today I have begotten you”; just as he says in another place, “You are a priest forever, according to the order of Melchizedek.”

In the days when he was in the flesh, he offered prayers and supplications with loud cries and tears to God, who was able to save him from death, and he was heard because of his reverence. Son though he was, he learned obedience from what he suffered; and when perfected, he became the source of eternal salvation for all who obey him, designated by God as high priest according to the order of Melchizedek.

Brothers and sisters: We exhort you to admonish the unruly; cheer the faint hearted; support the weak; be patient toward all. See that no one returns evil to any other; always seek one another’s good and, for that matter, the good of all. Rejoice always, never cease praying, render constant thanks; such is God’s will for you in Christ Jesus. Do not stifle the Spirit. Do not despise the prophecies. Test everything; retain what is good. Avoid any semblance of evil.

May the God of peace make you perfect in holiness. May he preserve you whole and entire, spirit, soul, and body, irreproachable at the coming of our Lord Jesus Christ.

The apostles said to the Lord, “Increase our faith,” and Jesus answered: “If you had faith the size of a mustard seed, you could say to this sycamore, ‘Be uprooted and transplanted into the sea,’ and it would obey you. If one of you had a servant plowing or herding sheep and he came to you from the fields, would you say to him, ‘Come and sit down at table’? Would you not rather say, ‘Prepare my supper. Put on your apron and wait on me while I eat and drink. You can eat and drink afterward’? Would he be grateful to the servant who was only carrying out his orders? It is quite the same with you who hear me. When you have done all you have been commanded to do, say, ‘We are useless servants. We have done no more than our duty.’”