July 02 The Deposition of the Venerable Robes of our most holy Lady, the Theotokos at Blachernae Constantinople 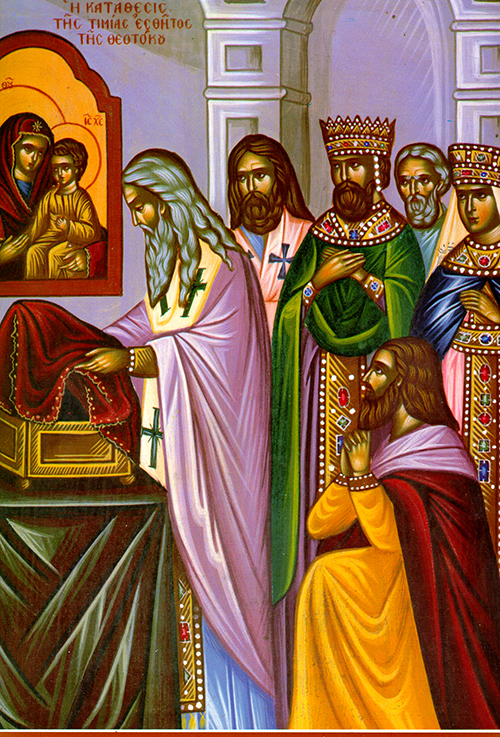 During the reign of the Byzantine Emperor Leo the Great (457-474), the brothers Galbius and Candidus, associates of the emperor, set out from Constantinople to Palestine to venerate the holy places. In a small settlement near Nazareth they stayed in the home of a certain old Jewish woman. In her house they noticed a room where many lamps were lit, incense burned, and sick people were gathered. When they asked her what the room contained, the woman did not want to give an answer for a long time. After persistent requests, she said that she had a very precious sacred item: the Robe of the Mother of God, which performed many miracles and healings. Before her Dormition the Most Holy Virgin bequeathed one of her garments to a pious Jewish maiden, an ancestor of the old woman, instructing her to leave it to another virgin after her death. Thus, the Robe of the Mother of God was preserved in this family from generation to generation. The jeweled chest, containing the sacred Robe, was transferred to Constantinople. On June 2, 458 St. Gennadius, Patriarch of Constantinople, transferred the sacred Robe into the Blachernae church with appropriate solemnity, placing it within a new reliquary.

Ever-virgin Mother of God and protection of the human race, you gave the robe and cincture of your most pure body to your city as a powerful protection. These garments remained incorrupt because of your virginal childbirth. For in you, both time and nature have been renewed. Therefore, we pray that you grant peace to the universe and great mercy to our souls.

As a mantle of immortality you have given to the faithful the garment that covered your most pure body, O Virgin whom God himself has blessed and divine protection of the human race. With love we celebrate the feast of the deposition of your mantle, and we sing with faith: Rejoice, O Virgin, for you are the pride of Christians.

Brothers and sisters: The first covenant had regulations for worship and an earthly sanctuary. For a tabernacle was constructed, the outer one, in which were the lampstand, the table, and the showbread; this was called the holy place. Behind the second veil was the tabernacle called the holy of holies, in which were the golden altar of incense and the ark of the covenant entirely covered with gold. In the ark were the golden jar containing manna, the rod of Aaron which had blossomed, and the tablets of the covenant. Above the ark were the cherubim of glory overshadowing the place of expiation. We cannot speak not of each of these in detail. These were the arrangements for worship. In performing their service the priests used to go into the outer tabernacle constantly, but only the high priest went into the inner one, and that but once a year, with the blood which he offered for himself and for the sins of the people.

Brothers and sisters: You must consider yourself dead to sin but alive for God in Christ Jesus. Do not, therefore, let sin rule your mortal body and make you obey its lusts; no more shall you offer the members of your body to sin as weapons for evil. Rather, offer yourselves to God as men who have come back from the dead to life, and your bodies to God as weapons for justice. Sin will no longer have power over you; you are now under grace, not under the law.

What does all this lead to? Just because we are not under the law but under grace, are we free to sin? By no means! You must realize that when you offer yourselves to someone as obedient slaves, you are the slaves of the one you obey, whether yours is the slavery of sin, which leads to death, or of obedience, which leads to justice. Thanks be to God, though once you were slaves of sin, you sincerely obeyed that rule of teaching which was imparted to you.

At that time Jesus entered Peter’s house and found Peter’s mother-in-law in bed with a fever. He took her by the hand and the fever left her. She got up at once and began to wait on him. As evening drew on, they brought him many who were possessed. He expelled the spirits by a simple command and cured all who were afflicted thereby fulfilling what had been said through Isaiah the prophet: “It was our infirmities he bore, our sufferings he endured.”

Seeing the people crowd around him, Jesus gave orders to cross to the other shore. A scribe approached him and said, “Teacher, wherever you go I will come after you.” Jesus said to him, “The foxes have lairs, the birds in the sky have nests, but the Son of Man has nowhere to lay his head.” Another, a disciple to him, “Lord, let me go and bury my father first.” But Jesus told him, “Follow me, and let the dead bury their dead.” Jesus got into the boat and his disciples followed him.