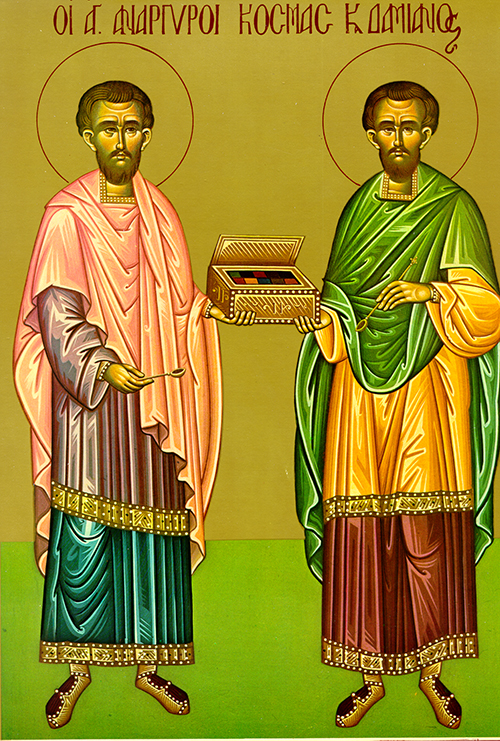 The holy martyrs, wonderworkers, and unmercenary healers Cosmas and Damian were brothers born in Rome, and physicians by profession. They led strict chaste lives and were granted by God the gift to heal the sick. By their generosity and exceptional kindness, the brothers converted many to Christ. Their spiritual influence attracted the attention of the Roman authorities, and soldiers sought out the brothers to arrest them. Local Christians convinced the brothers to go into hiding to prevent their capture. Other Christians were arrested in their place which caused Cosmas and Damian to surrender themselves to the soldiers on the condition the others who had been arrested because of them be released. They confessed in front of the emperor Carnius (283-284), who became blind through the power of the saints’ prayers. All present were converted, even Carnius, who begged the saints to heal him. The martyrs met their end at the hands of their former teacher who grew jealous as the fame of his former pupils grew as word of their holy acts spread.

Today the people sing to God on high because He gave us doctors who practiced without fee. Let us sing to the holy Cosmas and glorious Damian: Since you have been given the grace to cure so freely, distribute it freely among those who venerate you.

Receiving the grace to heal from the source of miracles, you generously used it for those who called on you. Visit us in our spiritual and physical needs, holy doctors Cosmas and Damian, and seek mercy from Christ our God for us.

Brothers and sisters: I do not want you to be ignorant of this mystery lest you be conceited: blindness has come upon part of Israel until the full number of Gentiles enter in, and then all Israel will be saved. As Scripture says: “Out of Zion will come the deliverer who shall remove all impiety from Jacob; and this is the covenant I will make with them when I take away their sins.” In respect to the gospel, the Jews are enemies of God for your sake; in respect to the election, they are beloved by him because of the patriarchs. God’s gift and his call are irrevocable.

Just as you were once disobedient to God and now have received mercy through their disobedience, so they have become disobedient – since God wished to show you mercy – that they too may receive mercy. God has imprisoned all in disobedience that he might have mercy on all.

How deep are the riches and the wisdom and the knowledge of God! How inscrutable his judgments, how unsearchable his ways! For, [Scripture says:] who has known the mind of the Lord? Or who has been his counselor? Who has given him anything so as to deserve return? For from him and through him and for him all things are. To him be glory forever. Amen.

Once on the sabbath Jesus walked through the standing grain. His disciples felt hungry, so they began to pull off the heads of grain and eat them. When the Pharisees spied this, they protested: “See here! Your disciples are doing what is not permitted on the sabbath.” Jesus replied: “Have you not read what David did when he and his men were hungry, how he entered God’s house and ate the holy bread, a thing forbidden to him and his men to anyone other than priests? Have you not read in the law how the priests on temple duty can break the sabbath rest without incurring guilt? I assure you, there is something greater than the temple here. If you understood the meaning of the text, ‘It is mercy I desire and not sacrifice,’ you would not have condemned these innocent men. The Son of Man is indeed Lord of the sabbath.”