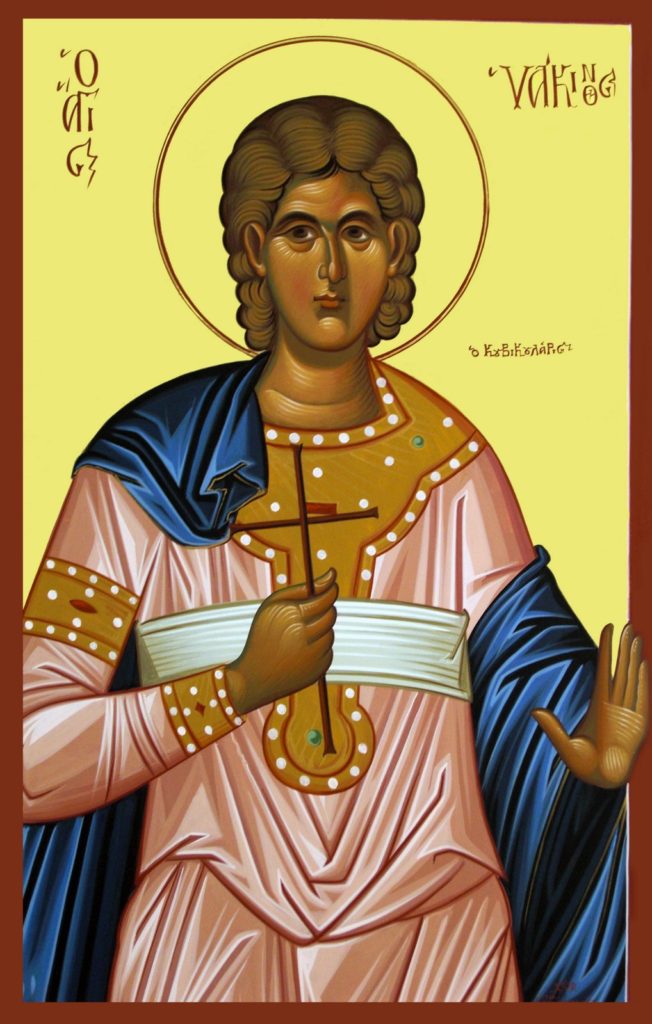 St. Hyacinth, a native of Caesarea in Cappadocia, was raised in a Christian family. The emperor Trajan made the boy his chamberlain, unaware that he was a secret Christian. One day, while the emperor and his entourage were offering sacrifices to idols, the young Hyacinth remained at the palace, shut himself up in a small room, and prayed fervently to the Lord Jesus Christ. One of the palace servants overheard him praying and denounced him to the emperor. He said that although Hyacinth was entrusted with an imperial position, he did not honor the Roman gods, and was secretly praying to Christ. Hyacinth was brought to trial before Trajan, who tried to persuade him to deny Christ and sacrifice to the idols, but the holy martyr remained steadfast and declared that he was a Christian. The twelve-year-old Hyacinth suffered for Christ in the year 108 in the city of Rome. Later, the saint’s relics were transferred to Caesarea.

O Lord our God, your holy martyr Hyacinth has deserved the crown of immortality on account of his good fight. Armed with your strength, he has vanquished his persecutors and crushed Satan’s dreadful might. Through his supplications, O Christ our God, save our souls.

Your martyr, O Christ, possessed the tree of life which is the faith in his soul, and which is more precious than the garden of Eden. By the Spirit he destroyed the tree of lies and was given a crown of glory for this from You, the supremely merciful Lord.

Brothers and sisters: Freed from your sin, you became slaves of justice. (I use the following example from human affairs because of your weak human nature.) Just as formerly you enslaved your bodies to impurity and licentiousness for their degradation, make them now the servants of justice for their sanctification. When you were slaves of sin, you had freedom from justice. What benefit did you then enjoy? Things you are now ashamed of, all of them tending toward death. But now that you are freed from sin and have become slaves of God, your benefit is sanctification as you tend toward eternal life. The wages of sin is death, but the gift of God is eternal life in Christ Jesus our Lord.

At that time as Jesus entered Capernaum, a centurion approached him with this request: “Sir, my serving boy is at home in bed paralyzed, suffering painfully.” Jesus said to the centurion, “I will come and cure him.” “Sir,” the centurion said in reply, “I am not worthy to have you under my roof. Just give an order and my boy will get better. I am a man under authority myself and I have troops assigned to me. If I give one man the order, ‘Dismissed,’ off he goes. If I say to another, ‘Come here,’ he comes. If I tell my slave, ‘Do this,’ he does it.” Jesus showed amazement on hearing this and remarked to his followers, “I assure you, I have never found this much faith in Israel. Mark what I say! Many will come from the east and the west and will find a place at the banquet in the kingdom of God with Abraham, Isaac, and Jacob, while the natural heirs of the kingdom will be driven out into the dark. Wailing will be heard there, and the grinding of teeth.” To the centurion Jesus said, “Go home. It shall be done because you trusted.” That very moment the boy got better.