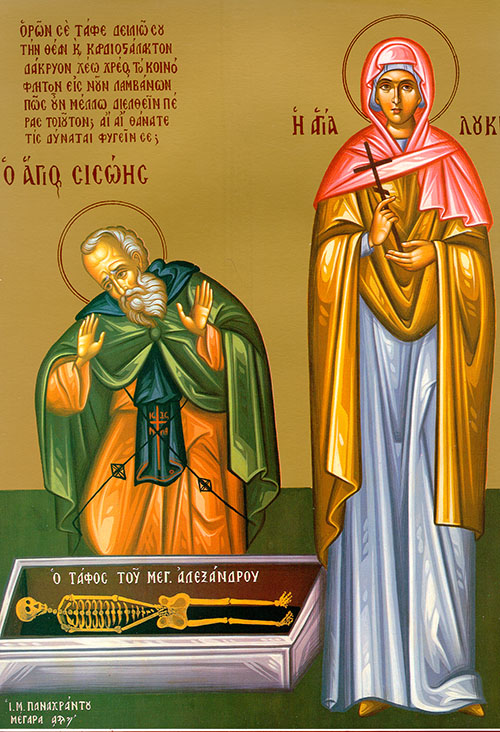 Our venerable father Sisoes the Great was a 5th century hermit in Egypt and was very remarkable in the exercise of the monastic life. Many of his “words” are recorded in the Apophthegmata Patrum (Sayings of the Desert Fathers). A brother once told him that he could not hold the wise sayings in his head and quote them to others, and Sisoes replied, “It is not necessary. That which is necessary is to acquire purity of mind and speak from this purity, placing one’s hope in God.”

You made the wilderness your dwelling, O father Sisoes, the bearer of God. You became an angel in the flesh and a wonderworker. Through fast, vigil, and prayers, you obtained from God special graces to heal the sick and to sanctify the souls of those who come to you with trust. Glory to the One who gave you strength! Glory to the One who crowned you! Glory to the One who through your intercession grants healing to all!

You appeared on earth as an angel in the flesh, O venerable Sisoes, and you enlightened the faithful with your divine miracles. Therefore, we glorify you in faith.

Brothers and sisters: Accept one another, then, as Christ accepted you, for the glory of God. Yes, I affirm that Christ became the servant of the Jews because of God’s faithfulness in fulfilling the promises to the patriarchs, whereas the Gentiles glorify God because of his mercy. As Scripture has it, “Therefore I will praise you among the Gentiles and I will sing to your name.” Again, “Rejoice, O Gentiles, with his people.” And, “Praise the Lord, all you Gentiles and sing his glory, all you peoples.” Once more, Isaiah says, “The root of Jesse will appear, he who will rise up to rule the Gentiles; in him the Gentiles will find hope.” So may God, the source of hope, fill you with all joy and peace in believing so that through the power of the Holy Spirit you may have hope in abundance.

I am convinced, my brothers, that you are filled with goodness, that you have complete knowledge, and that you are able to give advice to one another. Yet I have written to you rather boldly in parts of this letter by way of reminder. I take this liberty because God has given me the grace to be a minister of Christ Jesus among the Gentiles, with the priestly duty of preaching the gospel of God so that the Gentiles may be offered up as a pleasing sacrifice, consecrated by the Holy Spirit.

“When the unclean spirit departs from a man, it roams through arid wastes searching for a place of rest and finding none. Then it says, ‘I will go back where I came from,’ and returns to find the dwelling unoccupied, though swept and tidied now. Off it goes again to bring back with it this time seven spirits more evil than itself. They move in and settle there. Thus the last state of that man becomes worse than the first. And that is how it will be with this evil generation.”