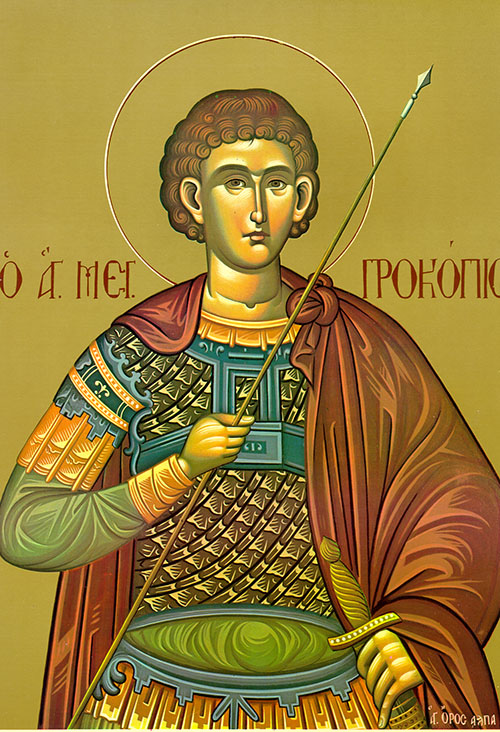 The holy great martyr Procopius was born Neanius, raised by his pagan mother, and worked in service of the emperor Diocletian. He was sent to Alexandria to persecute the Church of God. On his way there he had a vision, similar to that of Saul on his voyage to Damascus, and the Lord Jesus appeared asking him, “Why do you persecute Me?” At that moment a radiant Cross appeared in the air. Neanius felt an inexpressible joy and spiritual happiness in his heart and he was transformed from being a persecutor into a zealous follower of Christ. When it was discovered that Neanius was no longer worshiping pagan idols, he was brought before a judge and handed the decree of Diocletian which the saint read through and tore to pieces in front of the court. He was sent in chains to Caesarea in Palestine. There he was tortured and thrown into a dark prison cell. On his first night there, the Lord Jesus Christ Himself came to him again and baptized the suffering confessor, and gave him the name Procopius. Procopius suffered greatly as he was tormented, but he refused to renounce Christ. He was beheaded in the year 303.

Receiving heaven’s invitation, O holy one, you turned from the errors of your ancestors and their ancient ways to being zealous for Christ like Paul. You endured many tortures and wounds, and you have been repaid with a crown of glory. Therefore, pray to Christ to save us, O great martyr Procopius.

Inflamed with a heavenly zeal for Christ and protected by the might of the Cross, you leveled the rages and bitterness of the foe. You raised up the Church, O Procopius, by the strength of your faith. You enlightened us by your example.

When Jesus finished giving these commands to his twelve disciples, he went away from that place to teach and preach in other towns.

Brothers and sisters: I commend to you our sister Phoebe, who is a deaconess of the church of Cenchreae. Please welcome her in the Lord, as saints should. If she needs help in anything, give it to her, for she herself has been of help to many, including myself.

Give greetings to Prisca and Aquila; they were my fellow workers in the service of Christ Jesus and even risked their lives for the sake of mine. Not only I but all the churches of the Gentiles are grateful to them. Remember me also to the congregation that meets in their house. Greetings to my beloved Epaenetus; he is the first offering that Asia made to Christ. My greetings to Mary, who has worked hard for you, and to Andronicus and Junias, my kinsman and fellow prisoners; they were outstanding apostles, and they were in Christ even before I was. Greetings to Ampliatus who is dear to me in the Lord; to Urbanus, our fellow worker in service of Christ; and to my beloved Stachys. Greetings to Apelles, who proved himself in Christ’s service, and to all who belong to the household of Aristobulus. Greetings to my kinsman Herodion and to the members of the household of Narcissus who are in the Lord. Greetings too, to Tryphaena and Tryphosa, who have worked hard for the Lord; and also to dear Persis, who has labored long in the Lord’s service. Greetings to Rufus, a chosen servant of the Lord, and to his mother, who has been a mother to me as well. Greetings to Asyncritus, Phlegon, Hermes, Patrobas, Hermas, and the brothers who are with them; to Philologus and Julia, to Nereus and his sister, to Olympas, and all the saints who are with them. Greet one another with a holy kiss. All the churches of Christ send you greetings.

The Lord addressed the people at length in parables, speaking in this fashion: “One day a farmer went out sowing. Part of what he sowed landed on a footpath, where birds came and ate it up. Part of it fell on rocky ground, where it had little soil. It sprouted at once since the soil had no depth, but when the sun rose and scorched it, it began to wither for the lack of roots. Again, part of the seed fell among thorns, which grew up and choked it. Part of it, finally, landed on good soil and yielded grain a hundred – or sixty – or thirtyfold. Let everyone heed what he hears!”