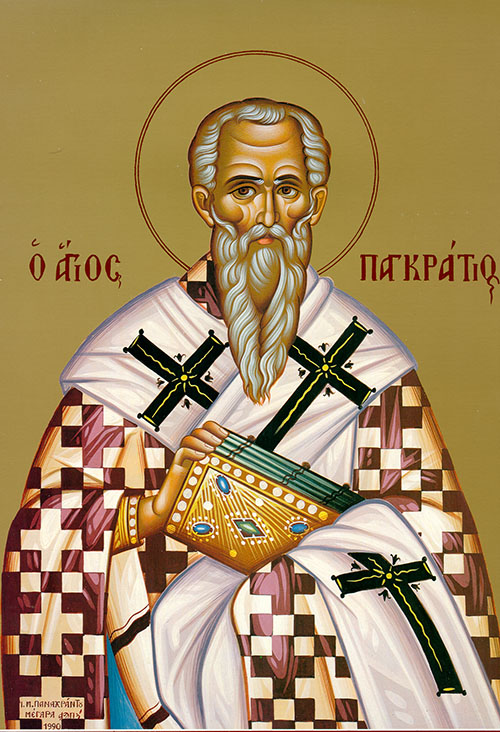 The hieromartyr Pancratius, Bishop of Taormina, was born when our Lord Jesus Christ yet lived upon the earth. The parents of Pancratius were natives of Antioch. Hearing the good news of Jesus Christ, Pancratius’ father took his young son with him to Jerusalem to see the greater Teacher for himself. It was during this period that the young Pancratius got to know the Apostle Peter. After the Ascension of our Lord, one of the apostles came to Antioch and baptized the parents of Pancratius together with all the household. When his parents died, Pancratius left behind his inherited possessions and went to Pontus and began living in a cave. He spent his days in prayer and deep contemplation. The holy Apostle Peter, while passing through those parts, visited Pancratius at Pontus. He took him along to Antioch, and then to Sicily, where the holy Apostle Paul then was. There, Saints Peter and Paul made St. Pancratius the bishop of Taormina in Sicily.

Like an arrow on fire, you were aimed at Taormina to kill the godless and to bring light to the faithful. You strengthened them in the faith by your preaching, and you finished your work by spilling your blood. O martyred priest Pancratius, pray for your flock and for all who cherish your memory.

You appeared to the people of Taormina as a star, and you became a priest-martyr for Christ, O Pancratius. As you stand before Him, pray for us who love you.

Brothers and sisters: All who are led by the Spirit of God are sons of God. You did not receive a spirit of slavery leading you back into fear, but a spirit of adoption through which we cry out, “Abba!” (that is, “Father”). The Spirit himself gives witness with our spirit that we are children of God. But if we are children, we are heirs as well: heirs of God, heirs with Christ, if only we suffer with him so as to be glorified with him.

I consider the sufferings of the present to be as nothing compared with the glory to be revealed in us. Indeed, the whole created world eagerly awaits the revelation of the sons of God. Creation was made subject to futility, not of its own accord but by him who once subjected it; yet not without hope, because the world itself will be freed from its slavery to corruption and share in the glorious freedom of the children of God.

At that time as he moved on, Jesus saw a man named Matthew at his post where taxes were collected. Jesus said to him, “Follow me.” Matthew got up and followed him. Now it happened that, while Jesus was at table in Matthew’s home, many tax collectors and those known as sinners came to join Jesus and his disciples at dinner. The Pharisees saw this and complained to his disciples, “What reason can the Teacher have for eating with tax collectors and those who disregard the law?” Overhearing the remark, Jesus said: “People who are in good health do not need a doctor; sick people do. Go and learn the meaning of the words, ‘It is mercy I desire and not sacrifice.’ I have come to call, not the self-righteous, but sinners.”