July 10 The Holy 45 Martyrs in Nicopolis in Armenia; Our Venerable Father Anthony of the Kiev Lavra; The Holy Martyred Brothers Francis, Mutius, Raphael, and their companions, martyred in Damascus 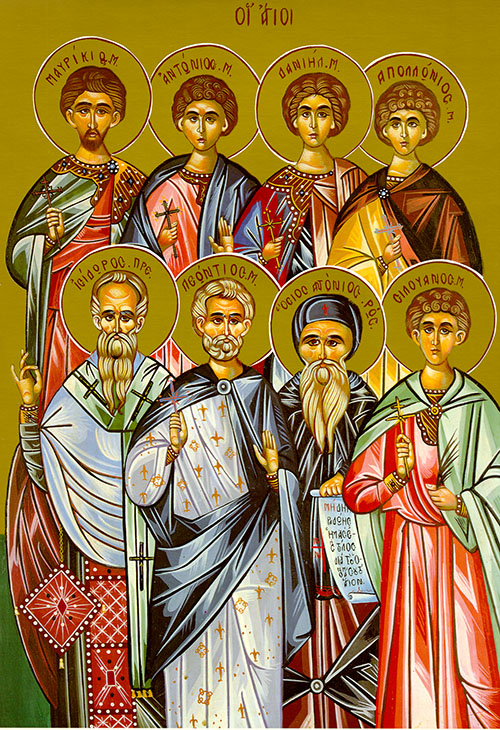 The holy forty-five martyrs in Nicopolis in Armenia. Of saints Leontius, Mauritius, Daniel, Antonius, Anicetus, Sisinnus, and others, who under the emperor Licinius and the governor Lysias were tortured in many ways in the year 319.

Our venerable father Anthony of Kiev was a hermit, who in the lavra called “the Caves”, followed the monastic life which he learned on Mt. Athos. He was the founder of Russian monasticism in the eleventh century.

The holy Maronite Franciscan brothers: Francis, Mutius and Raphael, Massabki, and eight others with them, killed in Damascus in 1860. They were deceitfully handed over to the enemy by a traitor and afflicted with various humiliations on account of their faith, they ended their lives with the glorious death of martyrs.

You renounced and left the world  following Christ in the spirit of the Gospel. Living a life of an angel, you settled in the peaceful shelter of Mount Athos. After that you came to the mountains of Kiev with the blessing of the fathers. You ended your life of labor there, casting light over all your homeland. Showing the path of the kingdom to all monks, you led them on to Christ. Now beg Him to save our souls, O venerable Anthony.

From childhood you loved God with all your heart and lovingly followed Him, O venerable father. Scorning this passing world as a trifle, you took up residence in a cave. There you fought the army of invisible demons, and you were like the sun over the world. Now you stand before the throne with the angels, so remember us who honor you that we may sing: Rejoice, O father Anthony.

Brothers and sisters, my heart’s desire, my prayer to God for the Isrealites, is that they may be saved. Indeed, I can testify that they are zealous for God though their zeal is unenlightened. Unaware of God’s justice and seeking to establish their own, they did not subject themselves to the justice of God. Christ is the end of the law. Through him, justice comes to everyone who believes. Moses writes of justice that comes from the law, “The one who observes the law shall live by it.” But of the justice that comes from faith he says, “Do not say in your heart, ‘Who shall go up to heaven?’ (that is, to bring Christ down), or ‘Who shall go down into the abyss?’ (that is, to bring Christ up from the dead).” What is it he does say? “The word is near you, on your lips and in your heart” (that is, the word of faith which we preach). For if you confess with your lips that Jesus is Lord, and believe in your heart that God raised him from the dead, you will be saved. Faith in the heart leads to justification, confession on the lips to salvation.

At that time as Jesus approached the Gadarene boundary, he encountered two men coming out of the tombs. They were possessed by demons and were so savage that no one could travel along that road. With a sudden shriek they cried: “Why meddle with us, Son of God? Have you come to torture us before the appointed time?” Some distance away a large herd of swine was feeding. The demons kept appealing to him, “If you expel us, send us into the herd of swine.” Jesus answered, “Out with you!” At that they came forth and entered the swine. The whole herd went rushing down the bluff into the sea and were drowned.

The swineherds took to their heels, and upon their arrival in the town related everything that had happened, including the story about the two possessed men. The upshot was that the entire town came out to meet Jesus. When they caught sight of him, they begged him to leave their neighborhood.

Readings for the father

Brothers and sisters: The fruit of the spirit is love, joy, peace, patient endurance, kindness, generosity, faith, mildness, and chastity. Against such there is no law! Those who belong to Christ Jesus have crucified their flesh with its passions and desires. Since we live by the spirit, let us follow the spirit’s lead. Let us never be boastful, or challenging, or jealous toward one another.

Brothers and sisters, if someone is detected in sin, you who live by the spirit should gently set him right, each of you trying to avoid falling into temptation himself. Help carry one another’s burdens; in this way you will fulfill the law of Christ.

At that time, coming down the mountain with the Twelve, Jesus stopped at a level stretch where there were many of his disciples; a large crowd of people was with them from all Judea and Jerusalem and the coast of Tyre and Sidon, people who came to hear him and be healed of their diseases. Those who were troubles with unclean spirits were cured; indeed, the whole crowd was trying to touch him because power went out from him which cured all. Then, raising his eyes to his disciples, he said: “Blest are you poor; the reign of God is yours. Blest are you who hunger; you shall be filled. Blest are you who are weeping; you shall laugh. Blest shall you be when men hate you, when they ostracize you and insult you and proscribe your names as evil because of the Son of Man. On the day they do so, rejoice and exult, for your reward shall be great in heaven.”