July 11 The Holy Martyr the Illustrious Euphemia; The Passing of Olga, Princess of Kiev; Repose of the Blessed Bishop Martyr Valeriu Traian Frentiu 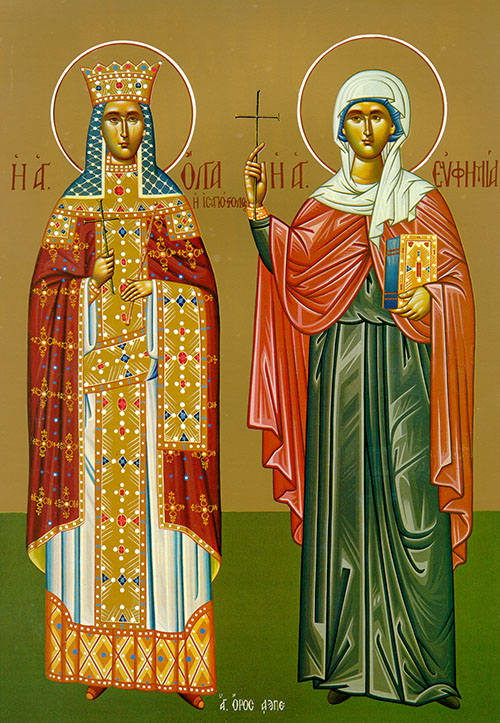 The holy martyr Euphemia the Illustrious was handed over to the beasts after various tortures under the emperor Diolcetian. Her passing is kept on Sept. 16; today is the day that her holy relics confirmed the orthodox faith at the Fourth Ecumenical Council in Chalcedon.

The passing of Olga, princess of Kiev, baptized Helen, at Kiev in Rus. She was the grandmother of St. Vladimir, the first of the Rurik dynasty to receive baptism. She prepared the way to Christ for all the peoples of Rus.

Lighting your lamp, you loved your Spouse. You were radiant from your virtues, O praiseworthy one, and because of this you pledged yourself to Christ. You received a crown of suffering from Him. From troubles deliver us who venerate your memory in faith, O Euphemia.

Raising your mind on the wings of theology, you soared far above visible creation. Seeking the God and Creator of all things being rewarded by finding Him, you were born again to Christ in baptism. Receiving delight from the Tree of Life, you remain incorrupt for all ages, O glorious Olga.

You took part in the struggle with great valor, defending faith in Christ your beloved Savior. Through the powerful intercession of the Mother of God, intercede with Christ that He may wipe out all false teachings and humiliate the pride of the enemy. From the six hundred and thirty Fathers of the Council, you have received the definition of the faith and preserved it faithfully, O Euphemia worthy of all praise.

Let us sing hymns to the Benefactor of the world who exalted the God-wise Olga in the land of Rus. May He forgive our sins by her prayers.

Brothers and sisters: As your fellow workers we beg you not to receive the grace of God in vain. For he says, “In an acceptable time I have heard you; on a day of salvation I have helped you.” Now is the acceptable time! Now is the day of salvation! We avoid giving anyone offense, so that our ministry may not be blamed. On the contrary, in all that we do we strive to present ourselves as ministers of God, acting with patient endurance amid trials, difficulties, distresses, beatings, imprisonments, and riots; as men familiar with hard work, sleepless nights, and fastings; conducting ourselves with innocence, knowledge, and patience, in the Holy Spirit, in sincere love as men with the message of truth and the power of God; wielding the weapons of righteousness with right hand and left, whether honored or dishonored, spoken of well or ill. We are called imposters, yet we are truthful; nobodies who in fact are well known; dead, yet here we are alive; punished, but not put to death; sorrowful, though we are always rejoicing; poor, yet we enrich many. We seem to have nothing, yet everything is ours!

Brothers and sisters, I beg you to be on the watch against those who cause dissension and scandal, contrary to the teachings you have received. Avoid their company. Some men serve, not Christ our Lord, but their own bellies, and they deceive the simpleminded with smooth and flattering speech. Your obedience is known to all, and so I am delighted with you. I want you to be wise in regard to what is good and innocent of all evil. Then the God of peace will quickly crush Satan under your feet. May the grace of our Lord Jesus Christ be with you.

Timothy, my fellow worker, sends you his greetings; so, too, do my kinsmen Lucius, Jason, and Sosipater. I, Tertius, who have written this letter, send you my greetings in the Lord. Greetings also from Gaius, who is host to me and to the whole church. Erastus, the city treasurer, and our brother Quartus wish to be remembered to you.

Now to him who is able to strengthen you in the gospel which I proclaim when I preach Jesus Christ, the gospel which reveals the mystery hidden for many ages but now manifested through the writings of the prophets, and, at the command of the eternal God, made known to all the Gentiles that they may believe and obey – to him, the God who alone is wise, may glory be given through Jesus Christ into endless ages. Amen.

At that time the disciples came to Jesus and asked him, “Why do you speak to the people in parables?” He answered: “To you has been given a knowledge of the mysteries of the reign of God, but it has not been given to the others. To the man who has, more will be given until he grows rich; the man who has not, will lose what little he has.

“I use parables when I speak to them because they look but do not see, they listen but do not hear or understand. Isaiah’s prophecy is fulfilled in them which says: ‘Listen as you will, you shall not understand, look intently as you will, you will not see. Sluggish indeed is this people’s heart. They have scarcely heard with their ears, they have firmly closed their eyes; otherwise they might see with their eyes, and hear with their ears, and understand with their hearts, and turn back to me, and I should heal them.’