July 15 The Holy Martyrs Cyricus and Julietta; The Holy Great Prince Vladimir, Equal to the Apostles 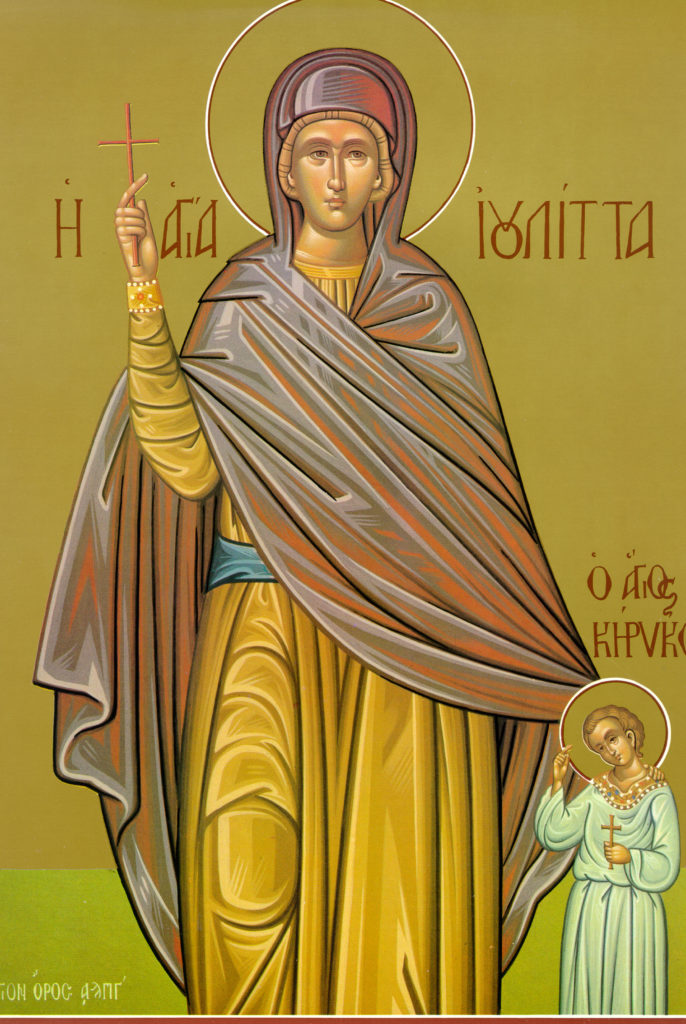 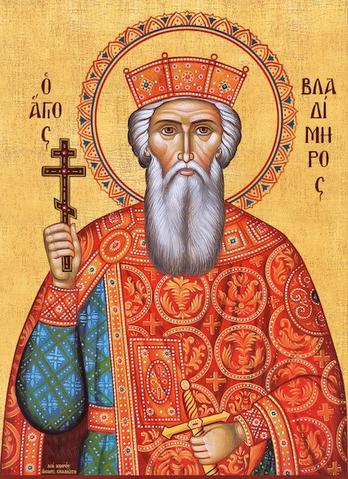 The holy martyrs Cyricus and Julietta, his mother, were martyred at Caesarea in Cappadocia in the year 304. When they had firmly refused the order of the judge to offer incense to idols, they were cast into the fire.

The holy great martyr Prince Vladimir, equal to the apostles was baptized Basil at Kiev in Rus’. Son of Prince Svyatoslav, grandson of Igor and Olga, he was pagan for the first part of his life. He sent out envoys to find the religion best suited for his people, and he and his court were baptized in the orthodox faith. He bestowed care in spreading the orthodox faith among the peoples subject to him. Reposed in the year 1015 and was buried in the church of the Tithes. A piece of his holy relics was kept in Holy Wisdom Cathedral, established by his son, Great Prince Yaroslav the Wise.

You were like a merchant seeking a fine pearl as you sat on the throne of the mother of cities, the God-redeemed Kiev. Sending messengers to the capitol in your search for the faith, you discovered the priceless Pearl which is Christ. He chose you in turn as a second Paul. You submitted to the rites of baptism, and the scales of spiritual blindness fell from your eyes. Now your people have come to celebrate your death. Pray for the authorities in the land of Rus’ to be saved.

Carrying Cyricus in her arms, Julietta, the martyr for Christ, bravely cried aloud with joy in the midst of the arena: “It is You, O Lord, who give strength to Your martyrs!”

You were like the great apostle Paul. Late in life you gave up the foolish philosophy of idols and became a perfect man through the water of baptism. Now you stand with joy in the court of Christ. We ask you to pray for the land of Rus’ and for the salvation of its authorities.

Brothers and sisters: Stop passing judgment before the time of the Lord’s return. Hw will bring to light what is hidden in darkness and manifest the intentions of hearts. At that time, everyone will receive his praise from God.

Brothers and sisters, I have applied all this to myself and Apollos by way of example for your benefit. May you learn from us not to go beyond what is set down, so that none of you will grow self-important by reason of his association with one person rather than another. Who confers any distinction on you? Name something you have that you have not received. If, then, you have received it, why are you boasting as if it were your own? At the moment you are completely satisfied. You have grown rich! You have launched upon your reign, that we might be reigning with you!

The Lord told this parable: “The reign of God is like a buried treasure which a man found in a field. He hid it again, and rejoicing at his find went and sold all that he had and bought that field. Or again, the kingdom of heaven is like a merchant’s search for fine pearls. When he found one really valuable pearl, he went back and put up for sale all that he had and bought it.

“The reign of God is also like a dragnet thrown into a lake, which collects all sorts of things. When it was full they hauled it ashore and sat down to put what was worthwhile into containers. What was useless they threw away. That is how it will be at the end of the world. Angels will go out and separate the wicked from the just and hurl the wicked into the fiery furnace, where they will wail and grind their teeth.

“Have you understood all this?” “Yes,” they answered; to which Jesus replied, “Every scribe who is learned in the reign of God is like the head of a household who can bring from his storeroom both the new and the old.”

When Jesus had finished these parables, he moved on from that district. Jesus next went to his native place and spent his time teaching them in their synagogues.

Brothers and sisters: I assure you, the gospel I proclaimed to you is no mere human invention. I did not receive it from any man, nor was I schooled in it. It came by revelation from Jesus Christ. You have heard, I know, the story of my former way of life in Judaism. You know that I went to extremes in persecuting the Church of God and tried to destroy it; I made progress in Jewish observance far beyond most of my contemporaries, in my excess of zeal to live out all the traditions of my ancestors.

But the time came when he who had set me apart before I was born and called me by his favor chose to reveal his Son to me, that I might spread among the Gentiles the good tidings concerning him. Immediately, without seeking human advisers or even going to Jerusalem to see those who were apostles before me, I went off to Arabia; later I returned to Damascus. Three years after that I went up to Jerusalem to get to know Cephas, with whom I stayed fifteen days. I did not meet any other apostles except James, the brother of the Lord.

I declare before God that what I have just written is true. Thereafter I entered the regions of Syria and Cilicia. The communities of Christ in Judea had no idea what I looked like; they had only heard that “he who was formerly persecuting us is not preaching the faith he tried to destroy,” and they gave glory to God on my account.

The Lord said, “Truly I assure you: whoever does not enter the sheepfold through the gate but climbs in some other way is a thief and a marauder. The one who enters through the gate is the shepherd of the sheep; the keeper opens the gate for him. The sheep hear his voice as he calls his own by name and leads them out. When he has brought out all those that are his, he walks in front of them, and the sheep follow him because they recognize his voice. They will not follow a stranger; such a one they will flee, because they do not recognize a stranger’s voice.”

Even though Jesus used this figure with them, they did not grasp what he was trying to tell them. He therefore said to them again: “My solemn word is this: I am the sheepgate. All who came before me were thieves and marauders who the sheep did not heed. I am the gate. Whoever enters through me will be safe. He will go in and out, and find pasture.”