July 16 The Holy Martyrs Athenogenes, Bishop of Sebaste, and His Ten Disciples 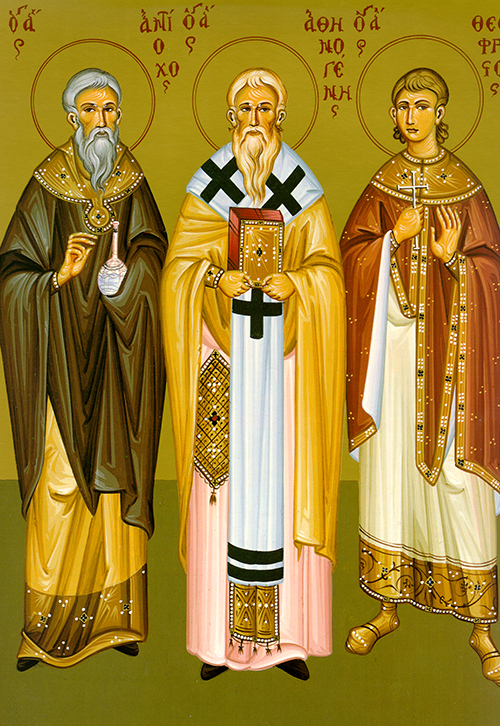 The holy martyr Athenogenes was the bishop of Sebaste in Cappadocia. Christianity was spreading in Sebaste because of the grace-filled preaching of Bishop Athenogenes. When the governor heard that the citizens of Sebaste refused to participate in a festival for idols, he sent soldiers to arrest St. Athenogenes and his disciples. While in prison, St. Athenogenes encouraged his spiritual children for their impending struggle. Led forth to trial, all the holy martyrs confessed themselves Christians and refused to offer sacrifice to idols. After undergoing fierce tortures, the disciples of the holy bishop were beheaded. After the execution of the disciples, the executioners were ordered to torture the bishop. Strengthened by the Lord, Saint Athenogenes underwent the tortures with dignity. His only request was that he be executed in the monastery. Taken to his own monastery, the saint gave thanks to God, and he rejoiced in the sufferings that he had undergone for Him. St. Athenogenes asked that the Lord would forgive the sins of all those who would remember both him and his disciples. The Lord granted the saint to hear His Voice before death, announcing the promise given to the penitent thief: “Today you shall be with Me in Paradise.” The hieromartyr willingly bent his neck beneath the sword.

The holy Athenogenes offered his ten disciples like a sacrifice to the Lord. The shepherd and his sheep entered the heavenly fold. By their work they vanquished the lies of the pagans. O Christ our God, save your flock from the wolves by the prayer of your martyrs.

You heeded the word of the Master and laid down your life for your sheep like a good shepherd. Therefore we bless you, O priest-martyr Athenogenes, and we praise your ten disciples who were guided by fear of God and by your teachings. The Master has crowned you as a friend and set you at his right side in glory. Now pray to Him for all of us.

Brothers and sisters: I speak the truth in Christ: I do not lie. My conscience bears me witness in the Holy Spirit that there is great grief and constant pain in my heart. Indeed, I could even wish to be separated from Christ for the sake of my brothers, my kinsmen the Israelites. Theirs were the adoption, the glory, the covenants, the law-giving, the worship, and the promises; theirs were the patriarchs, and from them came the Messiah (I speak of his human origins.). Blessed forever be God who is all over! Amen.

At that time a leader of the synagogue came to Jesus, did him reverence, and said: “My daughter has just died. Please come and lay your hands on her and she will come back to life.” Jesus stood up and followed him, and the disciples did the same. As they were going, a woman who had suffered from hemorrhages for twelve years came up from behind Jesus and touched the tassel of his cloak. “If only I can touch his cloak,” she thought, “I shall get well.” Jesus turned around and saw her and said, “Courage daughter! Your faith has restored your health.” That very moment the woman got well.

When Jesus arrived at the synagogue leader’s house and saw the flute players and the crowd who were making a din, he said, “Leave, all of you! The little girl is not dead. She is asleep.” At this they began to ridicule him. When the crowd had been put out he entered and took her by the hand, and the little girl got up. News of this circulated throughout the district.