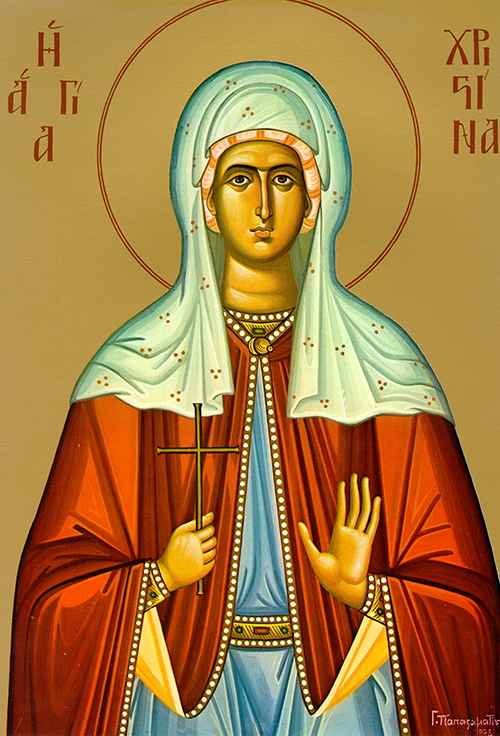 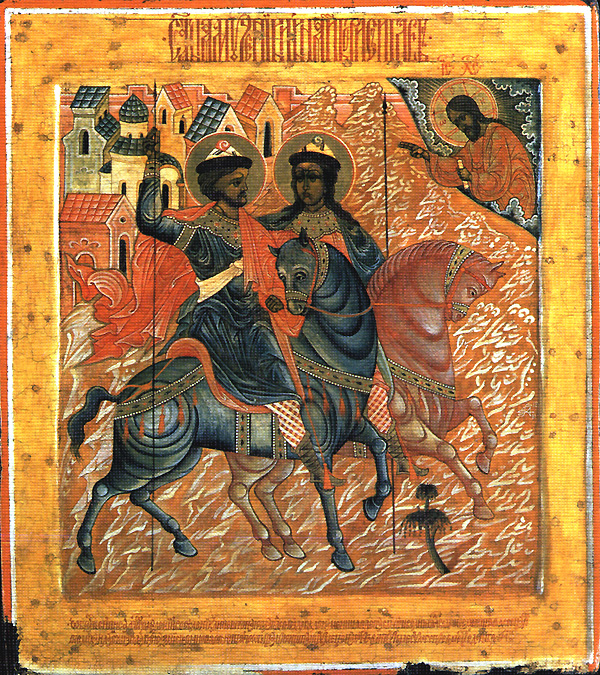 The holy great martyr Christine lived during the 3rd century. She was born into a rich family, and her father was governor of Tyre. By the age of 11 the girl was exceptionally beautiful, and many wanted to marry her. Christine’s father, however, envisioned that his daughter should become a pagan priestess. One time Christine was visited by an angel who instructed her in the true faith in Christ, the Savior of the world. The angel called her a bride of Christ and told her about her future suffering. After many methods of torment, the local governor Julian gave orders to throw her into a red-hot furnace and lock her in it. After five days they opened the furnace and found the martyr alive and unharmed. Seeing the miracle take place, many believed in Christ the Savior, and the torturers executed St. Christine with a sword.

The holy martyrs Boris and Gleb, baptized Roman and David, who were princes of Rus’ and sons of St. Vladimir the Great. They preferred to suffer death at the hands of their brother Svyatopolk than resist him through violence. Boris obtained the palm of martyrdom on the river Alta near Pereslavl and Gleb a short time later near Smolensk in the year 1015.

Righteous martyrs for the gospel and sharers in the passion, you did not oppose the violence of the enemy. Although your brother tried to kill your bodies, he still could not touch your souls. Let the evil lover of power groan unhappily. You are filled with joy among the angels standing before the Holy Trinity. Please pray for your homeland and its conversion and for the salvation of its people.

Today the memory of your suffering gleams, O noble martyrs; it compels us to praise Christ our God. Rushing to gather around your holy relics, we seek gifts of health by your prayers. You are heavenly healers, O holy ones.

Brothers and sisters: We who are strong in faith should be patient with the scruples of those whose faith is weak; we must not be selfish. Each should please his neighbor so as to do him good by building up his spirit. Thus, in accord with Scripture, Christ did not please himself: “The reproaches they uttered against you fell on me.” Everything written before our time was written for our instruction, that we might derive hope from the lessons of patience and the words of encouragement in the Scriptures. May God, the source of all patience and encouragement, enable you to live in perfect harmony with one another according to the spirit of Christ Jesus, so that with one heart and voice you may glorify God, the Father of our lord Jesus Christ. Accept one another, then, as Christ accepted you, for the glory of God.

Brothers and sisters: We know that God makes all things work together for the good of those who have called according to his decree. Those whom he foreknew he predestined to share in the image of his Son, that the Son might be the first-born of many brothers. Those he predestined he likewise called; those he called he also justified; and those he justified he in turn glorified. What shall we say after that? If God is for us, who can be against us? Is it possible that he who did not spare his own Son but handed him over for the sake of us all will not grant us all things besides? Who shall bring a charge against God’s chosen ones? God, who justifies? Who shall condemn them? Christ Jesus, who dies or rather was raised up, who is at the right hand of God and who intercedes for us?

Who will separate us from the love of Christ? Trial, or distress, or persecution, or hunger, or nakedness, or danger, or the sword? As Scripture says: “For your sake we are being slain all the day long; we are looked upon as sheep to be slaughtered.” Yet in all this we are more than conquerors because of him who has loved us. For I am certain that neither death nor life, neither angels nor principalities, neither present nor the future, nor powers, neither height nor depth nor any other creature, will be able to separate us from the love of God that comes to us in Christ Jesus, our Lord.

At that time Jesus moved on from there, two blind men came after him crying out, “Son of David, have pity on us!” When he got to the house, the blind men caught up with him. Jesus said to them, “Are you confident I can do this?” “Yes, Lord,” they told him. At that he touched their eyes and said, “Because of your faith it shall be done to you”; and they recovered their sight. Then Jesus warned them sternly, “See to it that no one knows of this.” But they went off and spread the word of him through the whole area.

As they were leaving, suddenly some people brought him a mute who was possessed by a demon. Once the demon was expelled the mute began to speak, to the great surprise of the crowds. “Nothing like this has ever been seen in Israel!” they exclaimed. But the Pharisees were saying, “He casts out demons through the prince of demons.”

Jesus continued his tour of all the towns and villages.  He taught in their synagogues, he proclaimed the good news of God’s reign, and he cured every sickness and disease.

“To hate me is to hate my Father. Had I not performed such works among them as no one has ever done before, they would not be guilty of sin; bit as it is, they have seen, and they go on hating me and my Father. However, this only fulfills the text in their law: ‘They hated me without cause.’ When the Paraclete comes, the Spirit of truth who comes from the Father – and whom I myself will send from the Father – he will bear witness on my behalf. You must bear witness as well, for you have been with me from the beginning.