July 25 The Dormition of the Holy Anna, Mother of the Most Holy Theotokos; The Memory of the Holy Women Olympiada and Euphraxia; Commemoration of the Fifth Ecumenical Council 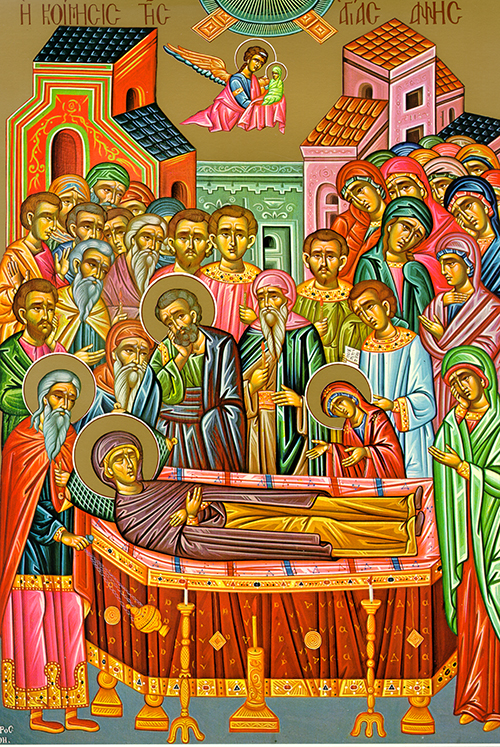 The Holy Anna was the daughter of the priest Matthan and his wife Mary. She was of the tribe of Levi and the lineage of Aaron. According to Tradition, she died peacefully in Jerusalem at age 79, before the Annunciation to the Most Holy Theotokos. During the reign of Saint Justinian the Emperor (527-565), a church was built in her honor at Deutera. Emperor Justinian II (685-695; 705-711) restored her church, since St. Anna had appeared to his pregnant wife. It was at this time that her body and maphorion (veil) were transferred to Constantinople.

Memory of the Holy Women Olympiada and Euphraxia at Nicomedia in Bithynia: Olympiada was a widow who, bereft of her husband while still young, passed the remainder of her life most piously in Constantinople among women devoted to God. She was a deaconess, first in the time of Patriarch Nectraius, and then under John Chrysostom. She assisted the poor and was also very faithful to St. John Chrysostom in his exile. Euphraxia went with her mother to Egypt, traveling around the monasteries and giving alms. She received a monastic habit and entered into deep ascetic discipline.

The Fifth Ecumenical Council was held in Constantinople in the time of the Emperor Justinian the Great in the year 553. All the Monophysite heresies were condemned at this council, as were the works of Origen (against the resurrection of the dead).

O holy Anna, you are filled with the wisdom of God, and you gave birth to the most pure Mother, the one who gave birth to Life. Therefore, you have been carried up in glory on this day to the blessedness of heaven, to the abode of those who exalt with joy. And now you pray, O ever-blessed one, for the forgiveness of sins for all those who honor you with all their heart.

Let us celebrate the memory of Christ’s ancestors, and fervently ask for their help so that, delivered from all affliction, we may cry out: O God, who glorified them according to your good will, remain always with us.

Readings for the Feast of the Holy Anna

The Lord said to his disciples: “Ask and you shall receive; seek and you shall find; knock and it shall be opened to you. For whoever asks, receives; whoever seeks, finds’ whoever knocks, is admitted. What father among you will give his son a snake if he asks for a fish, or hand him a scorpion if he asks for an egg? If you, with all your sins, know how to give your children good things, how much more will the heavenly Father give the Holy Spirit to those who seek him.”

As for me, I have not used any of these rights, nor do I write this now to see to it that anything should be done for me. I would rather die than let anyone rob me of my boast! Yet preaching the gospel is not the subject of a boast; I am under compulsion and have no choice. I am ruined if I do not preach it! If I do it willingly, I have my recompense; if unwillingly, I am nonetheless entrusted with a charge. And this recompense of mine? It is simply this, that when preaching I offer the gospel free of charge and do not make full use of the authority the gospel gives me.

At that time the Pharisees and Sadducees came along, and as a test asked Jesus to show them some sign in the sky. He gave them this reply: “In the evening you say, ‘Red sky at night, the day will be bright’; but in the morning, ‘Sky red and gloomy, the day will be stormy.’ If you know how to interpret the look of the sky, can you not read the signs of the times? An evil, faithless age is eager for a sign, but no sign will be given it except that of Jonah.” With that he left them abruptly.

The disciples discovered when they arrived at the other side of the lake that they had forgotten to bring any bread along. Jesus said to them, “Be on lookout against the yeast of the Pharisees and Sadducees.”