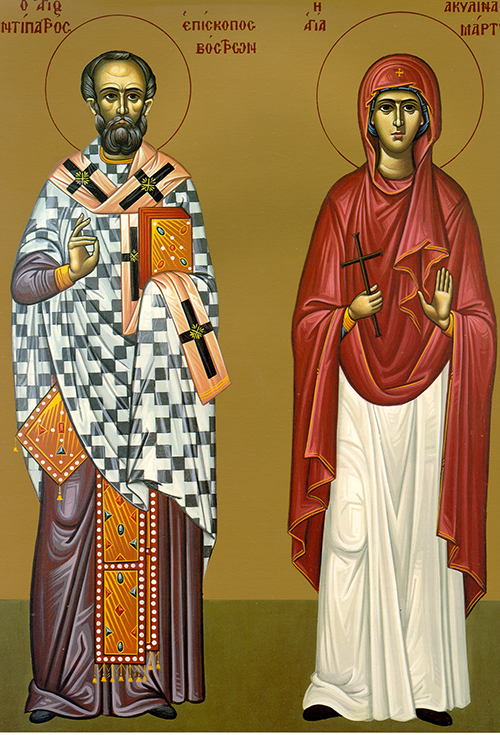 The holy martyr Aquilina was twelve years old when she was brutally martyred under the emperor Trajan in the late third century. After converting one of her pagan friends to Christianity, she was arrested and tortured. Believing Aquilina dead after her tortures, her captors left her body outside the city to be eaten by wild beasts. However the saint was still alive, and during the night an angel came to her and healed her. She returned to denounce the pagan governor. She was taken into prison again, denounced as a sorceress, and ordered to be executed by beheading. St. Aquilina was taken by the Lord before her execution, but the executioner, fearing for his own safety, beheaded the body of the saint even though she was dead. Her relics were later taken to Constantinople and placed in a church named for her.

Our holy father Triphyllus, Bishop of Leucosia in Cyprus, ardently defended the orthodox Nicene faith. He was the most eloquent speaker of his time, and a marvelous commentator in the Song of Songs, as St. Jerome relates.

O Jesus, your lamb Aquilina cries out to You with great love: O my Bridegroom, I long for You in great pain. I am crucified with You, and in baptism I am buried with You. I suffer for your sake in order to reign with You. I die for You in order to live with You. Accept me as an immaculate victim since I am immolated for your love. Through her intercession, O merciful One, save our souls.

The sincerity of your deeds has revealed you to your people as a teacher of moderation, a model of faith, and as an example of virtue. Therefore, you attained greatness through humility, and wealth through poverty. O father and archbishop Triphyllus, ask Christ our God to save our souls.

Purifying your soul by the balm of virginity, you soared to heaven in a flight of martyrdom. You languished with love of Christ, O precious saint, and now you can stand before Him, O Aquilina. Join the angels in unceasing prayer for us on earth.

You perfected virginal chastity in a wonderful life, and you proved yourself a bishop of Leucosia. You became a prophet and a guide for those seeking God, O Triphyllus. For this reason we bless you in song, O glory of pastors.

Brothers and sisters: Appearance does not make a Jew. True circumcision is not a sign in the flesh. He is a real Jew who is inwardly, and true circumcision is of the heart; its source is the spirit, not the letter. Such a one receives his praise, not from men, but from God.

What is the advantage, then, of being a Jew, and what value is there in circumcision? The answer is, much in every respect. First of all, the Jews were entrusted with the words of God. You may ask, what if some of them have not believed? Will not their unbelief put an end to God’s faithfulness? Of course not! God must be proved true even though every man be proved a liar, so that, as Scripture says, “You shall be vindicated in what you say, and win out when you are judged.” But if our wrongdoings provides proof of God’s justice, what are we to say? “Is not God unjust when he inflicts punishment?” (I speak in a merely human way.) Assuredly not! If that were so, how could God judge the world? Another question: If my falsehood brings to light God’s truth and thus promotes his glory, why must I be condemned as a sinner? Or why may we not do evil that good may come of it? This is the very thing that some slanderously accuse us of teaching; but they will get what they deserve.

Well then, do we find ourselves in a position of superiority? Not entirely. We have already brought the charge against Jews and Greeks alike that they are under the domination of sin. It is as Scripture says: “There is no just man, not even one; there is no one who understands, no one in search of God. All have taken the wrong course, all alike have become worthless; not one of them acts uprightly, no, not one. Their throats are open tombs; they use their tongues to deceive; the venom of asps lies behind their lips. Their mouths are full of curses and bitterness. Swiftly run their feet to shed blood; ruin and misery strew their course. The path of peace is unknown to them; the fear of God is not before their eyes.”

The Lord said: “Stop worrying, then, over questions like, ‘What are we to eat, or what are we to drink, or what are we to wear?’ The unbelievers are always running after these things. Your heavenly Father knows all that you need. Seek first his kingship over you, his way of holiness, and all these things will be given you besides. Enough, then, of worrying about tomorrow. Let tomorrow take care of itself. Today has troubles enough of its own.

Would one of you hand his son a stone when he asks for a loaf, or a poisonous snake when he asks for a fish? If you, with all your sins, know how to give your children what is good, how much more will your heavenly Father give good things to anyone who asks him!”