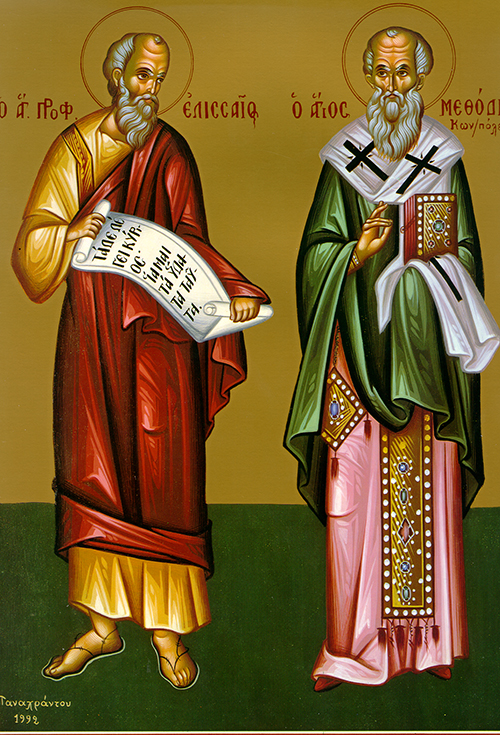 The holy prophet Elisha was a disciple of the prophet Elijah, and was himself a prophet in Israel from the time of King Joram to the days of Jehoash. Though his oracles do not remain, he nevertheless, by working miracles for foreigners, announced the coming of salvation for all people.

Our holy father Methodius, patriarch of Constantinople. While he was a monk, he betook himself to Rome to Pope St. Paschal the First in defense of the holy icons. Elevated to the episcopate, he solemnly celebrated the triumph of the orthodox faith with the restoration of the holy icons.

The glorious Elijah, an angel in the flesh, the greatest of the prophets and second forerunner of Christ’s coming, dispels diseases, purifies lepers, and showers all kinds of healing upon those who honor him, by sending a blessing from heaven upon Elisha.

Burning with zeal for the holy icons, O most wise saint, you boldly opposed the malice of the king. You were locked in a tomb and suffered torment, and for your labors you were exiled. Do not forget us who sing of your fame, O most blessed pastor Methodius.

O blessed Elisha, you lived the life of a prophet of God. You received an abundance of graces, and now together with Elijah, you intercede fervently with Christ our God for all of us.

You fought like an angel on earth and inherited heaven for a reward, O Methodius. Having clearly revealed the reverence that was due icons, you were subjected to agonies and terrible hardships. But this did not deter you from your path of truth as you condemned those who cast out the icons of Christ.

Brothers and sisters: When a man works, his wages are not regarded as a favor but as his due. But when a mar, does nothing, yet believes in him who justifies the sinful, his faith is credited as justice. Thus David congratulates the man to whom God credits justice without requiring deeds [when he says]: “Blest are they whose iniquities are forgiven, whose sins are covered over. Blest is the man to whom the Lord imputes no guilt.”

The Lord said: “Bo on your guard against false prophets, who come to you in sheep’s clothing but underneath are wolves on the prowl. You will know them by their deeds. Do you ever pick grapes from thornbushes, or figs from prickly plants? Never! Any sound tree bears good fruit, while a decayed tree bears bad fruit. A sound tree cannot bear bad fruit any more than a decayed tree can bear good fruit. Every tree that does not bear good fruit is  cut down and thrown into the fire. You can tell a tree by its fruit. None of those who cry out, ‘Lord, Lord,’ will enter the kingdom of God but only the one who does the will of my Father in heaven.”