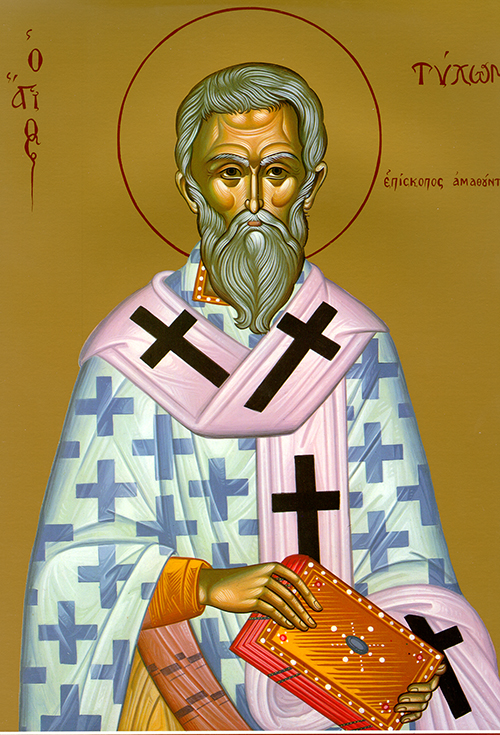 Our venerable father Tychon was bishop of Amathis on Cyprus. He labored zealously to eradicate the remnants of paganism on Cyprus; he destroyed a pagan temple and spread the Christian Faith. St. Tychon was generous, his doors were open to all, and he listened to and lovingly fulfilled the request of each person who came to him. Fearing neither threats nor tortures, he firmly and fearlessly confessed his faith before pagans. He died peacefully in the year 425.

You first crucified yourself to the world by becoming poor among the living. Then like a true shepherd, you put your life at the disposal of your flock. Enriching your sheep with miracles, you became a bright light for the Church of Amathis. By shedding light on it, you saved it from the fog of deceit, O father Tychon. By your prayers enlighten us today as we praise you.

You preserved in fasting through your love for God, and heaven sent you the power to expose the lies of idols, to save the people and cast out devils, to heal illness by the power of the Comforter.

Brothers and sisters: If, when we were God’s enemies, we were reconciled to him by the death of his Son, it is all the more certain that we who have been reconciled will be saved by his life. Not only that; we go so far as to make God our boast through our Lord Jesus Christ, through whom we have now received reconciliation.

Therefore, just as through one man sin entered the world and with sin death, death thus coming to all men inasmuch as all sinned – before the law there was sin in the world, even though sin is not imputed when there is no law – I say, from Adam to Moses death reigned, even over those who had not sinned by breaking a precept as did Adam, that type of the man to come.

But the gift is not like the offense. For if by the offense of the one man all died, much more did the grace of God and the gracious gift of the one man, Jesus Christ, abound for all. The gift is entirely different from the sin committed by the one man. In the first case, the sentence followed upon one offense and brought condemnation, but in the second, the gift came after many offenses and brought acquittal.

At that time Jesus got into the boat and his disciples followed him. Without warning a violent storm came up on the lake, and the boat began to be swamped by the waves. Jesus was sleeping soundly, so they made their way toward him and woke him: “Lord, save us! We are lost!” He said to them: “Where is your courage? How little faith you have!” Then he stood up and took the winds and the sea to task. Complete calm ensued; the men were dumbfounded. “What sort of man is this,” they said, “that even the winds and the sea obey him?”