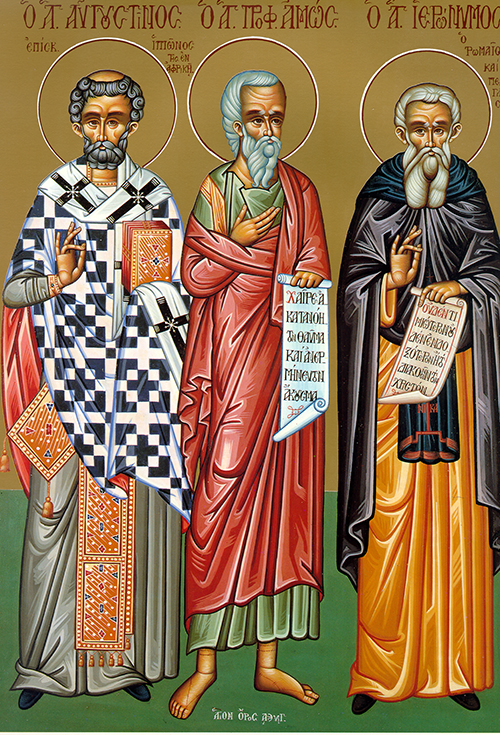 The Lord sent the holy prophet Amos to the sons of Israel. He was a herdsman of Tekoa and a dresser of sycamores, and his preaching was to defend the Lord’s righteousness and holiness against the transgressions of the children of Israel.

The venerable Jerome, priest of Stridon, who, born in Dalmatia, was an exceptional laborer. He pursued the studies of all literature in Rome and was baptized there. Then, seized by the power of contemplative life and having embraced the ascetic life, he proceeded to the East and was ordained a priest. When he returned to Rome, he stayed in a retreat of Pope Damasus, and then left for Bethlehem in Judea. There he founded a monastery. The notable teacher escaped the world by translating and explaining the Holy Scriptures. In a marvelous way he was a worker fulfilling very many of the needs of the Church. Finally, when he had lived to an advanced age, he reposed in peace in the early 5th century.

Celebrating the memory of your prophet Amos, O Lord, we beg You to save our souls through his intercession.

O guide of the true faith, mirror of piety and commendable behavior, bright star of the universe, and adornment of pontiffs, you enlightened us all by your teachings. O wise Jerome, inspired by God and lyre of the Holy Spirit, intercede with Christ our God that He may save our souls.

Purifying your heart by the Spirit, you accepted the gift of prophecy. You stood up and shouted your message. This is our God, and you shall have none before Him.

Delighting in purity, O wise in God, you repressed the urges to the flesh. You glowed with faith and bloomed like an orchard in paradise, O priest and father Jerome.

Brothers and sisters: Certainly the promise made to Abraham and his descendants that they would inherit the world did not depend on the law. It was made in view of the justice that comes from faith. If only those who observe the law are heirs, then faith becomes an empty word and the promise loses its meaning. Indeed, the law serves only to bring down wrath, for where there is no law there is no transgression. Hence, all depends on faith, everything is grace. Thus the promise holds true for all Abraham’s descendants, not only for those who have the law but for all who have his faith. He is father of us all, which is why Scripture says, “I have made you father of many nations.” Yes, he is our father in the sight of God in who he believed, the God who restores the dead to life and calls into being those things which had not been. Hoping against hope, Abraham believed and so became the father of many nations just as it was once told him, “Numerous as this shall be your descendants be.” Without growing weak in faith he thought of his own body, which was as good as dead (for he was nearly a hundred years old), and [he thought] of the dead womb of Sarah. Yet he never questioned or doubted God’s promise; rather, he was strengthened in faith and gave glory to God, fully persuaded that God would do whatever he had promised. Thus his faith was credited to him as justice.

The words, “It was credited to him,” were not written with him alone in view: they were intended for us too. For our faith will be credited to us also if we believe in him who raised Jesus our Lord from the dead, the Jesus who was handed over to death for our sins and raised up for our justification.

The Lord said: “None of those who cry out, ‘Lord, Lord,’ will enter the kingdom of God but only the one who does the will of my Father in heaven. When that day comes, many will plead with me, ‘Lord, Lord, have we not prophesied in your name? Have we not exorcised demons by its power? Did we not do many miracles in your name as well?’ Then I will declare to them solemnly, ‘I never knew you. Out of my sight, you evildoers!’”