June 24 The Nativity of the Holy Prophet, Forerunner and Baptist John 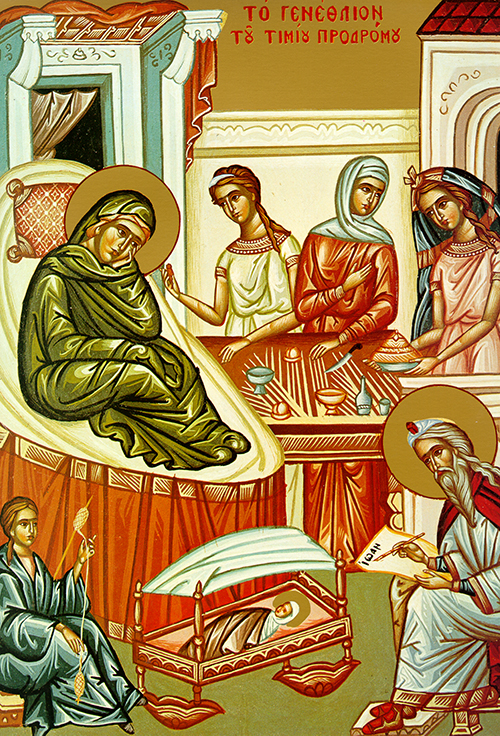 The Gospel (Luke 1:5) relates that the righteous parents of St. John the Baptist, the priest Zechariah and Elizabeth, lived in the ancient city of Hebron. They reached old age without having children, since Elizabeth was barren. Once, St. Zechariah was serving in the Temple of Jerusalem when he saw the Archangel Gabriel. The angel predicted that St. Zechariah would father a son, who would announce the Savior, the Messiah, awaited by the Old Testament Church. St. Elizabeth came to be with child, and fearing derision at being pregnant so late in life, she kept it secret for five months. Then her relative, the Virgin Mary, came to share her own joy. Elizabeth, “filled with the Holy Spirit,” was the first to greet the Virgin Mary as the Mother of God. St. John leapt in his mother’s womb at the visit of the Most Holy Virgin Mary and the Son of God incarnate within her. Soon St. Elizabeth gave birth to a son. On the eighth day, in accordance with the Law of Moses, he was circumcised and was called John.

Prophet and forerunner of the coming of Christ, although we honor you with love, we cannot give you worthy praise. Through your glorious and holy birth, your mother was freed from barrenness and your father from his loss of speech, and the incarnation of the Son of God is proclaimed to the world.

Today, she who once was barren gives birth to Christ’s forerunner. He himself is the fulfillment of all prophecy; for in the Jordan, he imposed his hand upon the Word of God whom the prophets have foretold and was shown to be his prophet, herald and forerunner.

Brothers and sisters: It is now the hour for you to wake from sleep, for our salvation is closer than when we first accepted the faith. The night is far spent; the day draws near. Let us cast off deeds of darkness and put on the armor of light. Let us live honorably as in daylight; not in carousing and drunkenness, not in sexual excess and lust, not in quarreling and jealousy. Rather, put on the Lord Jesus Christ and make no provision for the desires of the flesh.

Extend a kind of welcome to those who are weak in faith. Do not enter into disputes with them. A man of sound faith knows he can eat anything, while one who is weak in faith eats only vegetables. The man who will eat anything must not ridicule him who abstains from certain foods; the man who abstains must not sit in judgment on him who eats. After all, God himself has made him welcome. Who are you to pass judgment on another’s servant? His master alone can judge whether he stands or falls. And stand he will, for the Lord is able to make him stand.

In the days of Herod, king of Judea, there was a priest named Zechariah of the priestly order of Abijah; his wife, Elizabeth, was a descendant of Aaron. Both were just in the eyes of God, blamelessly following all the commandments and ordinances of the Lord. They were childless, for Elizabeth was sterile; moreover, both were advanced in years.

Once, when it was the turn of Zechariah’s class and he was fulfilling his functions as a priest before God, it fell to him by lot according to priestly usage to enter the sanctuary of the Lord and offer incense. While the full assembly of people was praying outside at the incense hour, an angel of the Lord appeared to Him, standing at the right of the altar of incense. Zechariah was deeply disturbed upon seeing him, and overcome with fear.

The angel said to him: “Do not be frightened, Zechariah; your prayer has been heard. Your wife Elizabeth shall bear a son who you shall name John. Joy and gladness will be yours, many will rejoice at his birth; for he will be great in the eyes of the Lord. He will never drink wine or strong drink, and he will be filled with the Holy Spirit from his mother’s womb. Many of the sons of Israel will he bring back to the Lord their God. God himself will go before him, in the spirit and power of Elijah, to turn the hearts of fathers and their children and the rebellious to the wisdom of the just, and to prepare for the Lord a people well-disposed.”

Zechariah said to the angel: “How am I to know this? I am an old man; my wife is too advanced in age.” The angel replied: “I am Gabriel, who stand in attendance before God. I was sent to speak to you and bring this good news. But now you will be mute–unable to speak–until the day these things take place, because you have not trusted my words. They will all come true in due season.” Meanwhile, the people were waiting for Zechariah, wondering at his delay in the temple. When he finally came out he was unable to speak to them, and they realized that he had seen a vision inside. He kept making signs to them, for he remained speechless.

Then, when his time of priestly service was over, he went home. Afterward, his wife Elizabeth conceived. She went into seclusion for five months, saying, “In these days the Lord is acting on my behalf; he has seen fit to remove my reproach among men.”

When Elizabeth’s time for delivery arrived, she gave birth to a son. Her neighbors and relatives, upon hearing that the Lord has extended his mercy to her, rejoiced with her. When they assembled for the circumcision of the child on the eighth day, they intended to name him after his father Zechariah. At this his mother intervened, saying: “No, he is to be called John.”

They pointed out to her, “None of your relatives has this name.” Then, using signs, they asked the father what he wished him to be called. He signaled for a writing tablet and wrote the words, “His name is John.” This astonished them all. At that moment his mouth was opened and his tongue loosed, and he began to speak in praise of God.

Fear descended on all in the neighborhood; throughout the hill country of Judea these happenings began to be recounted to the last detail. All who heard stored these things up in their hearts, saying, “What will this child be?” and, “Was not the hand of the Lord upon him?”

Then Zechariah, his father, filled with the Holy Spirit, uttered the prophecy, “Blessed be the Lord the God of Israel because he has visited and ransomed his people. And you, O child, shall be called prophet of the Most High; for you shall go before the Lord and prepare straight paths for him, giving his people a knowledge of salvation in freedom from their sins. All this is the work of the kindness of our God; he, the Dayspring, shall visit us in his mercy to shine on those who sit in darkness and in the shadow of death, to guide our feet into the way of peace.”

The child grew up and matured in spirit. He lived in the desert until the day when he made his public appearance in Israel.

Brothers and sisters: It is not that God’s word has failed. For not all Israelites are true Israelites nor are all Abraham’s descendants his children, but as Scripture says, “Through Isaac shall your descendants be called.” That means that it is not the children of the flesh who are not children of God; it is that children of the promise who are to be considered descendants. And this was the promise: “I will return at this time, and Sarah shall have a son.” Not only that; for when Rebekah had conceived twin children by one man, our father Isaac–while they were yet unborn and had done neither good nor evil, in order that God’s decree might stand fast “not by works but by the favor of him who calls” –God said to her, “The older shall serve the younger.” It is just as Scripture says, “I have loved Jacob and hated Esau.” What are we to say, then? That God is unjust? Not at all! He says to Moses, “I will show mercy to whomever I choose; I will have pity on whomever I wish.” So it is not a question of man’s willing or doing but of God’s mercy. Scripture says to Pharaoh, “This is why I might be proclaimed throughout all the earth.” In other words, God has mercy on whom he wishes, and whom he wishes he makes hardhearted.

“Do not suppose that my mission on earth is to spread peace. My mission is to spread, not peace, but division. I have come to set a man at odds with his father, a daughter with her mother, a daughter-in-law with her mother-in-law: in short, to make a man’s enemies those of his own household.” When Jesus had finished instructing his twelve disciples, he left that locality to teach and preach in their towns.