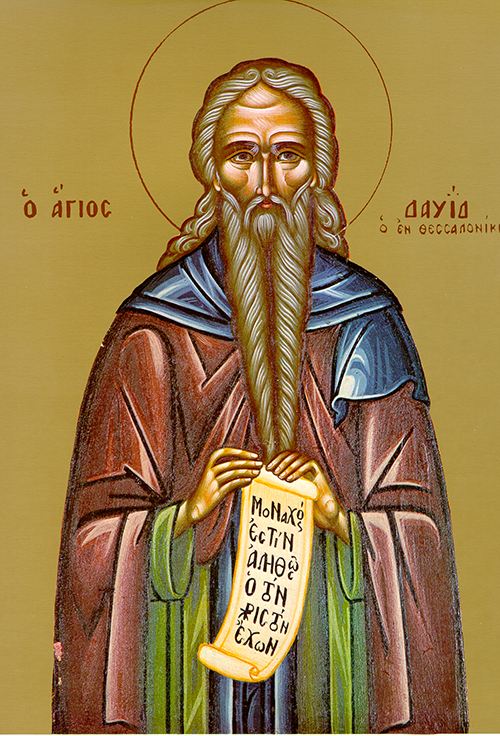 St. David of Thessalonica pursued asceticism at the monastery of the Holy Martyrs Theodore and Mercurius. Inspired by the example of the holy stylites, he lived in an almond tree in constant prayer, keeping strict fast, and enduring heat and cold. He remained there for three years until an angel told him to come down. St. David received from God the gift of wonderworking, and he healed many from sickness. The holy ascetic gave spiritual counsel to all who came to him. Having attained passionlessness, he was like an angel in the flesh, and he was able to take hot coals into his hands without harm. He died in the year 540.

Drowning out the noises of the world with hymns, you took up your abode in a tree in the midst of an orchard, O father. In your heart you left the world, and you ascended into heaven by your good works. There you have taken up your abode with the angels. O David, look down on us who keep your memory.

You were like a perpetually blossoming orchard, continually bearing fruit of the good works. You were like a bird with a beautiful song, O David. Within your heart, you found the tree of life in the Lord, even more surely than on the fields of paradise. You tended it carefully and nourished it with grace. Always pray for us, O blessed David.

Brothers and sisters: Now that we have been justified by faith, we are at peace with God through our Lord Jesus Christ. Through him we have gained access by faith to the grace in which we now stand, and we boast of our hope for the glory of God. But not only that – we even boast of our afflictions! We know that affliction makes for endurance, and endurance for tested virtues, and tested virtue for hope. And this hope will not leave us disappointed, because the love of God has been poured out in our hearts through the Holy Spirit who has been given to us. At the appointed time, when we were still powerless, Christ died for us godless men. It is rare that anyone should lay down his life for a just man, though it is barely possible that for a good man someone may have the courage to die. It is precisely in this that God proves his love for us: that while we were still sinners, Christ died for us. Now that we have been justified by his blood, it is all the more certain that we shall be saved by him from God’s wrath. For if, when we were God’s enemies, we were reconciled to him by the death of his Son, it is all the more certain that we who have been reconciled will be saved by his life.

The Lord said: “The eye is the body’s lamp. If your eyes are good, your body will be filled with light; if your eyes are bad, your body will be in darkness. And if your light is darkness, how deep will the darkness be! No man can serve two masters. He will either hate one and love the other or be attentive to one and despise the other. You cannot give yourself to God and money. I warn you then: do not worry about your livelihood, what you are to eat and drink or use for clothing. Is not life more than food? Is not the body more valuable than clothes?

“Look at the birds in the sky. They do not sow or reap, they gather nothing into barns; yet your heavenly Father feeds them. Are not you more important than they? Which of you by worrying can add a moment to his life-span? As for clothes, why be concerned? Learn a lesson from the way the wild flowers grow. They do not work; they do not spin. Yet I assure you, not even Solomon in all his splendor was arrayed like one of these. If God can clothe in such splendor the grass of the field, which blooms today and is thrown on the fire tomorrow, will he not provide much more for you, O weak in faith! Stop worrying, then, over questions like, ‘What are we to eat, or what are we to drink, or what are we to wear?’ The unbelievers are always running after these things. Your heavenly Father knows all that you need. Seek first his kingship over you, his way of holiness, and all these things will be given you besides. Enough, then, of worrying about tomorrow. Let tomorrow take care of itself. Today has troubles enough of its own.”