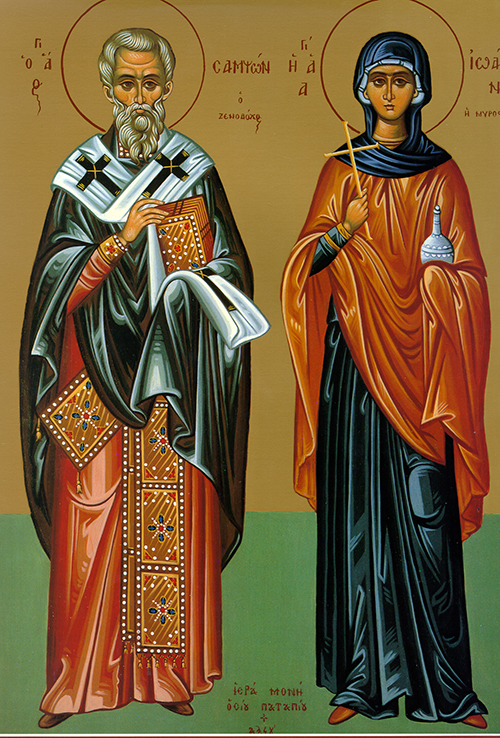 St. Sampson the Hospitaller was the son of rich and illustrious Roman parents. In his youth, he received an excellent education. He studied the medical arts and doctored the sick without charge. After the death of his parents, St. Sampson generously distributed alms and set his slaves free, preparing himself to go into the wilderness. With this intent in mind, he soon journeyed from Rome to the East. But the Lord directed him into a different path, that of service to neighbor, and so St. Sampson came to Constantinople. Settling into a small house, the saint began to take in homeless wanderers, the poor and the sick, and he attended to them. The Lord blessed the efforts of St. Sampson and endowed him with the power of wonderworking. He healed the sick not only through being a skilled physician but also as a bearer of the grace of God. News of St. Sampson spread abroad. The patriarch heard of his great virtue and ordained him to the holy priesthood. It was revealed to the grievously ill Emperor Justinian (527-565), that he could receive healing only through St. Sampson. While praying, the saint put his hand on the afflicted area and Justinian was healed. In gratitude, the emperor wanted to reward his healer with silver and gold, but the saint refused and instead asked Justinian to build a home for the poor and the sick. The emperor readily fulfilled his request. St. Sampson devoted the rest of his life to serving his neighbor.

By your patience you reaped your reward, O venerable Father. Your prayers were without end as was your love and solicitude for the poor. Pray to Christ for our salvation, O blessed and merciful Sampson.

You come quickly bearing heaven’s cures like some skillful doctor, O wise Sampson. We have assembled together with songs and chants, desiring to glorify Christ who works these marvels through you.

Brothers and sisters: God has mercy on whom he wishes, and whom he wishes he makes hard-hearted. You will say to me, “Why, then, does he find fault? For who can oppose his will?” Friend, who are you to answer God back? Does something molded say to its molder, “Why did you make me like this?” Does a potter have the right to make from the same lump of clay one vessel for a lofty purpose and another for a humble one? What if God, wishing to show his wrath and make known his power, has endured with much patience vessels fit for wrath, ready to be destroyed, and did so in order to make known the riches of his glory towards the vessels for mercy – which he prepared for glory – I am speaking about us whom he called, not only from among the Jews, but from among the Gentiles.

As it says in the Book of Hosea: “Those who were not my people I will call ‘my people,’ and those who were not loved I will call ‘Beloved’; in the very place where it was said to them, ‘You are not my people,’ but they shall be called sons of the living God.” Isaiah cries out, referring to Israel, “Though the number of Israelites should be as the sands of the sea, only the remnants will be saved, for quickly and decisively will the Lord execute sentence upon the earth.” It is just as Isaiah predicted: “Unless the Lord of hosts had left us a remnant, we should have become as Sodom, we should be like Gemorrah.”

How, then, shall we put it? That the Gentiles, who were not seeking justice, attained it – the justice which comes from faith – while Israel, seeking a law from which justice would come, did not arrive at that law? And why did it not? Because justice comes from faith, not from works. They stumbled over the stumbling stone, as Scripture says: “Behold, I am placing in Zion a stone to make men stumble and a rock to make them fall; but he who believes in him will not be put to shame.”

At that time when John, in prison, heard about the works Christ was performing, he sent a message by his disciples to ask Jesus, “Are you ‘He who is to come’ or do we look for another?” In reply, Jesus said to them: “Go back and report to John what you hear and see: the blind will recover their sight, cripples walk, lepers are cured, the deaf hear, dead men are raised to life, and the poor have the good news preached to them. Blest is the man who finds no stumbling block in me.”

As the messengers set off, Jesus began to speak to the crowds concerning John: “What did you go out to the wasteland to see–a reed swaying in the wind? Tell me, what did you go out to see–someone luxuriously dressed? Remember, those who dress luxuriously are to be found in royal palaces. Why then did you go out–to see a prophet? A prophet indeed, and something more! It is about this man that Scripture says, “I send my messenger ahead of you to prepare your way before you.’

“I solemnly assure you, history has known a man born of woman greater than John the Baptizer. Yet the least born into the kingdom of God is greater than he. From John the Baptizer’s time until now the kingdom of God has suffered violence, and the violent take it by force. All the prophets as well as the law spoke prophetically until John. If you are prepared to accept it, he is Elijah, the one who was certain to come. Heed carefully what you hear!’