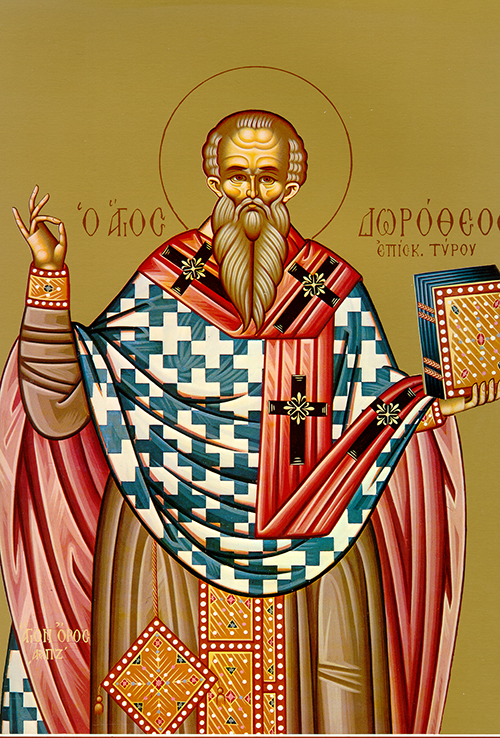 The Hieromartyr Dorotheus was bishop of the Phoenician city of Tyre during the time of persecution against Christians under the emperor Diocletian (284-305). Heeding the words of the Gospel (Mt. 10:23), the saint withdrew from Tyre and hid from persecutors. He returned to Tyre during the reign of St. Constantine the Great (306-337), again occupying the bishop’s throne he guided his flock for more than fifty years, and converted many pagans to Christianity. When the emperor Julian the Apostate (361-363) began to openly to persecute Christians, St. Dorotheus was already over 100 years old. He withdrew from Tyre to the Myzean city of Udum(present day Bulgarian Varna). Delegates of the emperor arrested him there for his refusal to offer sacrifice to idols. They began to torture the holy elder, and under torture he surrendered his soul to the Lord at the age of 107.

Resplendent with heavenly belief, you made a sacrifice of yourself to God. Suffering martyrdom for the immortal King, you have inherited the heavenly palace. O venerable father Dorotheus, in your joy pray to Christ to have mercy on all of us.

More radiant than the sun because of your good works, your heavenly teaching, and your suffering, you shed light on the world, O blessed Dorotheus. You burnt off the stubborn mist of the worship of idols and the fog of every trace of heresy. Therefore, we now rejoice in your memory.

When the day of Pentecost came it found the Apostles gathered in one place. Suddenly from up in the sky there came a noise like a strong driving wind which was heard all through the house where they were seated. Tongues as of fire appeared, which parted and came to rest on each of them. All were filled up with the Holy Spirit. They began to express themselves in foreign tongues and make bold proclamations as the Spirit prompted them.

Staying in Jerusalem at the time were devout Jews of every nation under heaven. These heard the sound, and assembled in a large crowd. They were much confused because each one heard these mean speaking his own language. The whole occurrence astonished them. They asked in utter amazement, “Are not all of these men who are speaking Galileans? How is it that each of us hears them in his native tongue? We are Pathians, Medes, and Elamites. We live in Mesopotamia, Judea, and Cappadocia, Pontus, the province of Asia, Phrygia and Pamphylia, Egypt, and the regions of Libya around Cyrene. There are even visitors from Rome – all Jews, or those who have come over to Judaism; Cretans and Arabs too. Yet each of us hears them speaking in his own tongue about the marvels God has accomplished.

On the last and greatest day of the feast of Booths, Jesus stood up and cried out: “If anyone thirsts, let him come to me; let him drink who believes in me. Scripture has it: ‘From with him rivers of living water shall flow.’”

Here he was referring to the Spirit, who those that came to believe in him were to receive. There was, of course, no Spirit as yet, since Jesus had not yet been glorified.

Some in the crowd who heard these words began to say, “This must be the Prophet.” Others were claiming, “He is the Messiah.” But an objection was raised: “Surely the Messiah is not to come from Galilee? Does not the Scripture say that the Messiah, being one of David’s family, is to come from Bethlehem, the village where David lived?” In this fashion the crowd was sharply divided over Jesus. Some of them wanted to apprehend him. However, no one laid hands on him.

When the temple guards came back, the chief priests and Pharisees asked them, “Why did you not bring him in?” The guards replied, “No man ever spoke like that before.” The Pharisees retorted, “Do not tell us you too have been taken in! You do not see any of the Sanhedrin believing in him, do you? Or the Pharisees? Only this lot, that knows nothing about law – and they are lost anyway!” One of his own number, Nicodemus (the man who had come to Jesus by night), spoke up to say, “Since when does our law condemn any man without first hearing him and knowing the facts?” They taunted him: “Do not tell us you are a Galilean too! Look it up. You will not find the Prophet coming from Galilee.”

Jesus spoke to the people once again: “I am the light of the world. No follower of mine shall ever walk in darkness; no, he shall possess the light of life.”