June 4 Our Father among the saints Metrophanes, Bishop of Constantinople 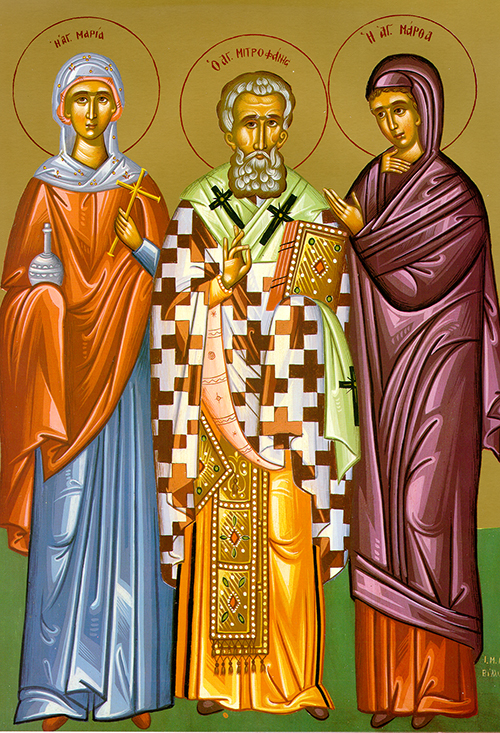 St. Metrophanes, Patriarch of Constantinople, was a contemporary of St. Constantine the Great (306-337). His father, Dometius, was a brother of the Roman emperor Probus (276-282). Seeing the falseness of the pagan religion, Dometius came to believe in Christ. During a time of terrible persecution of Christians in Rome, St. Dometius set off to Byzantium with two of his sons, Probus and Metrophanes. They were instructed in the law of the Lord by Bishop Titus, a man of holy life. Seeing the ardent desire of Dometius to labor for the Lord, St. Titus ordered him presbyter. After the death of Titus, Dometius (272-303) was elevated to the bishop’s throne, and thereafter his sons, Probus (303-315) and in 316 St. Metrophanes.

Preaching the great mystery of the Trinity, you spread the Word of Christ throughout the world. As the shepherd of Christ’s flock, you drove off the spiritual wolves in their attack; you save from perdition all those who call on you. Glory to Him who gave you this might! Glory to Him who chose you! Glory to him who defends the true faith through you!

You preached the faith of Christ clearly. You increased the numbers of his flock, and now you rejoice with angels as a reward. Therefore, we ask you to pray for us, O blessed Metrophanes.

In those days, once on shore, we learned that the island was called Malta. The natives showed us extraordinary kindness by lighting a fire and gathering us all around it, for it had begun to rain and was growing cold. Paul had just fed the fire with a bundle of brushwood he had collected, when a poisonous snake, escaping from the heat, fastened itself on his hand. At the sight of the snake hanging from his hand, the natives said to one another, “This man must really be a murdered if, after his escape from the sea, justice will not let him live.” But Paul shook the snake into the fire and suffered no ill effects from the bite. They expected to see him swell up or suddenly fall dead. After waiting for some time, however, and seeing nothing unusual happen to him, they changed their minds and began to say he was a god.

In the vicinity of the place was the estate of Publius, the chief figure on the island. He took us in and gave us kind hospitality for three days. It happened that the father of Publius was sick in bed, laid up with chronic fever and dysentery. Paul went to see the man, and praying, laid his hands on him and cured him. After this happened, the rest of the sick on the island began to come to Paul and they too were healed. They paid us much honor, and when we eventually set sail they brought us provisions for our needs.

Three months later we set sail in a ship which had passed winter at the island. It was an Alexandrian vessel with the “Heavenly Twins” as its figurehead. We put in at Syracuse and spent three days there. Then we sailed around toe and arrived at Rhegium. A day later a south wind began to blow which enabled us to reach Puteoli in two days. Here we found some of the brothers, who urged us to stay with them for a week.

This is how we finally came to Rome. Certain brothers from Rome who heard about us came out as far as the Forum of Appius and the Three Taverns to meet us. When Paul saw them, he thanked God and took fresh courage. Upon our entry into Rome Paul was allowed to take lodging of his own, although a soldier was assigned to keep guard over him.

Three days later Paul invited the prominent men of the Jewish community to visit him. When they had gathered he said: “My brothers, I have done nothing against our people or our ancestral customs; yet in Jerusalem I was handed over to the Romans as a prisoner. The Romans tried my case and wanted to release me because they found nothing against me deserving of death. When the Jews objected, I was forced to appeal to the emperor, though I had no cars to make accusations against my own people. This is the reason, then, why I have asked to see you and speak with you. I wear these chains solely because I share the hope of Israel.”

They replied: “ We have had no letters from Judea about you, nor have any of the brothers arrived with a report or a rumor to your discredit. For our part, we are anxious to hear you present your views. We know very well that this sect is denounced everywhere.”

With that, they arranged a day with him and came to his lodgings in great numbers. From morning to evening he laid the case before them, bearing witness to the reign of God among men. He sought to convince them about Jesus by appealing to the law of Moses and the prophets. Some, indeed, were convinced by what he said; others would not believe.

Without reaching any agreement among themselves, they began to leave. Then Paul added one final word: “The Holy Spirit stated it well when he said to your fathers through the prophet Isaiah: ‘Go to his people and say: You may listen carefully yet you will never understand; you may look intently yet you will never see. The heart of this people has grown sluggish. They have scarcely used their ears to listen; their eyes they have closed, lest they should see with their eyes, hear with their ears, understand with their minds, and repent; and I should have to heal them.’ Paul continued in his own words: now you must realize that this salvation of God has been transmitted to the Gentiles-who will heed it!”

For two full years Paul stayed on in his rented lodgings, welcoming all who came to him. With full assurance, and without any hindrance whatsoever, he preached the reign of God and taught about the Lord Jesus Christ.

At that time Jesus appeared to the disciples after being raised from the dead. When they had eaten their meal, Jesus said to Simon Peter, “Simon, son of John, do you love me more than these?” “Yes, Lord,” he said, “you know that I love you.” At which Jesus said, “Feed my lambs.”

A second time he put his question, “Simon, son of John, do you love me?” “Yes, Lord,” Peter said, “you know that I love you.” Jesus replied, “Tend my sheep.

A third time Jesus asked him, “Simon, son of John, do you love me?” Peter was hurt because Jesus had asked a third time, “Do you love me?” So Peter said to him: “Lord, you know everything. You know very well that I love you.” Jesus said to him, “Feed my sheep. I tell you solemnly: as a young man you fastened your belt and went about as you please; but when you are older you will stretch out your hands, and another will tie you fast and carry you off against your will.”

It is this same disciple who is the witness to these things; it is he who wrote them down and his testimony, we know, is true. There are still many other things that Jesus did, yet if they were written about in detail, I doubt there would be room enough in the entire world to hold the books to record them.