June 9 Our Father among the saints Cyril, Archbishop of Alexandria 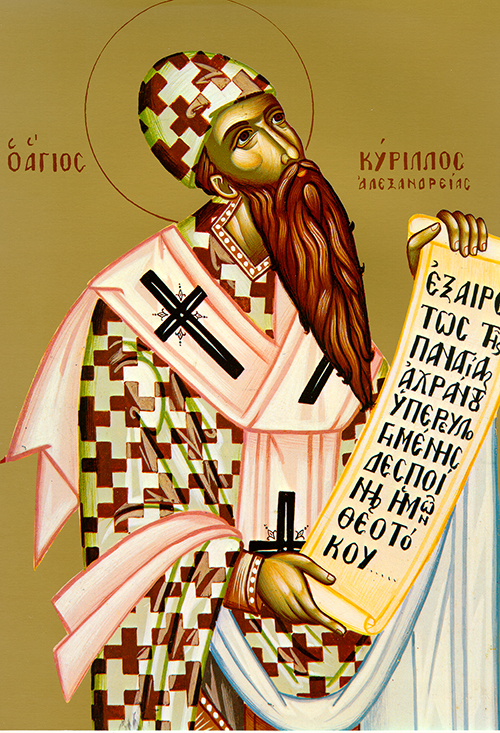 St. Cyril, Archbishop of Alexandria, a distinguished champion of Orthodoxy and a great teacher of the Church, came from an illustrious and pious Christian family. He studied the secular sciences, including philosophy, but most of all he strove to acquire knowledge of the Holy Scriptures and the truths of the Christian Faith. In his youth Cyril entered the monastery of Macarius in the Nitreia hills, where he stayed for six years. Theophilus, the patriarch of Alexandria (385-412), ordained him as a deacon, numbered him among the clergy and entrusted him to preach. In singular zeal for the fullness of the orthodox faith, he asserted dogmas at the Council of Ephesus concerning the one person in Christ and at the same time the divine maternity of the Virgin Mary.

Your words reveal a treasure of theology for the world, and they crushed the blasphemy of Nestor. You defended the true glory of the Theotokos, o father Cyril. Now pray to Christ to have mercy on us.

From the fountain of dogma you poured knowledge on us. With the same water from the savior you drowned heresy. You also protected your flock from terrible storms, and you are a beacon for everyone, O blessed Cyril. You reveal divine things to us.

Brothers and sisters: (Perverse men) did not see fit to acknowledge God, so God delivered them up to their own depraved sense to do what is unseemly. They are filled with every kind of wickedness: maliciousness, greed, ill will, envy, murder, bickering, deceit, craftiness. They are gossips and slanderers, they hate God, are insolent, haughty, boastful, ingenious in their wrongdoing and rebellious toward their parents. One sees in them men without conscience, without loyalty, without affection, without pity. They know God’s just decree that all who do such things deserve death; yet they not only do them but approve them in others.

That is why everyone of you who judges another is inexcusable. By your judgment you convict yourself, since you do the very same things. “We know that God’s judgment on men who do such things is just.” Do you suppose, then, that you will escape his judgment, you who condemn these things in others yet do them yourself? Or do you presume on his kindness and forbearance? Do you know that God’s kindness is an invitation to repent? In spite of this, your hard and impenitent heart is storing up retribution for that day of wrath when the just judgment of God will be revealed, when he will repay every man for what he has done: eternal life to those who strive for glory, honor, and immortality by patiently doing right; wrath and fury to those who selfishly disobey the truth and obey wickedness. Yes, affliction and anguish will come upon every man who has done evil, the Jew first, then the Greek.

“It was also said, ‘Whenever a man divorces his wife, he must give her a decree of divorce.’ What I say to you is: everyone who divorces his wife forces her to commit adultery, but lewd conduct is a separate case. The man who marries a divorced woman likewise commits adultery.