Mar. 03 The Holy Martyr Eutropius and his Companions 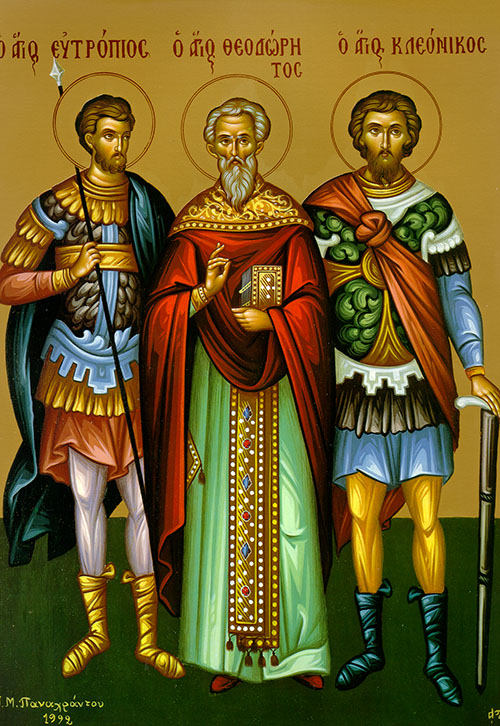 The Holy martyrs Eutropius, Cleonicus and Basiliscus suffered in the city og Pontine Amasea (Asia Minor) in about the year 308. The brothers Eutropius and Cleonicus, and Basiliscus the nephew of the Great Martyr Theodore the Recruit, were comrades. After the martyric death of St. Theodore, they wound up in prison and by their preaching brought many of the pagans in prison with them to the Christian Faith. Saints Eutropius, Cleonicus, and Basiliscus were brought before the governor Asclepiodotus, they firmly confessed their faith in Christ before him. They were mercilessly beaten, so that their bodies were entirely bruised. On the morning of March 3, Saints Eutropius and Cleonicus were crucified, but Basiliscus was left in prison. St. Basiliscus was executed on May 22 in the city of Komana. They beheaded  him and threw his body into a river, but Christian followers found his relics and buried them in a plowed field. Later at Komana a church was built and dedicated to St. Basiliscus.

This trinity of martyrs confessed the Holy Trinity before many nations. Undergoing their suffering of martyrdom, they have been presented to the angels. Today we are honoring them, celebrating their sacred and life-saving memory.

The Lord God planted a garden in Eden, in the east, and placed there the man whom he formed. Out of the ground the Lord God made grow every tree that was delightful to look at and good for food, with the tree of life in the middle of the garden and the tree of the knowledge of good and evil.

The Lord God then took the man and settled him in the garden of Eden, to cultivate and care for it. The Lord God gave the man this order: You are free to eat from any of the trees of the garden except the tree of knowledge of good and evil. From that tree you shall not eat; when you eat from it you shall die.

The Lord God said: It is not good for man to be alone. I will make a helper suited to him. So the Lord God formed out of the ground all the wild animals and all the birds of the air, and he brought them to the man to see what he would call them; whatever he called each living creature was then its name.

My son, do not forget my teaching, take to heart my commands;

For many days, and years of life, and peace, will they bring you.

Do not let love and fidelity forsake you; bind them around your neck; write them in the tablet of your heart.

Then will you win favor and esteem before God and human beings.

Trust in the Lord with all your heart, on your own intelligence do not rely;

In all your ways be mindful of him, and he will make straight your paths.

Do not be wise in your own eyes, fear the Lord and turn away from evil;

This will mean health for your flesh and vigor for your bones.

Honor the Lord with your wealth, with first fruits of all your produce;

Then will your barns be filled with plenty, with new wine your vats will overflow.

The discipline of the Lord, my son, do not spurn; do not disdain his reproof;

For whom the Lord loves he reproves, as a father, the son he favors.

She is more precious than corals, and no treasure of yours can compare to her.

Long life is her right hand, in her left are riches and honor;

Her ways are pleasant ways, and all her paths are peace;

She is a tree of life to those who grasp her, and those who hold her fast are happy.