Mar. 04 Our Venerable Father Gerasimus of the Jordan 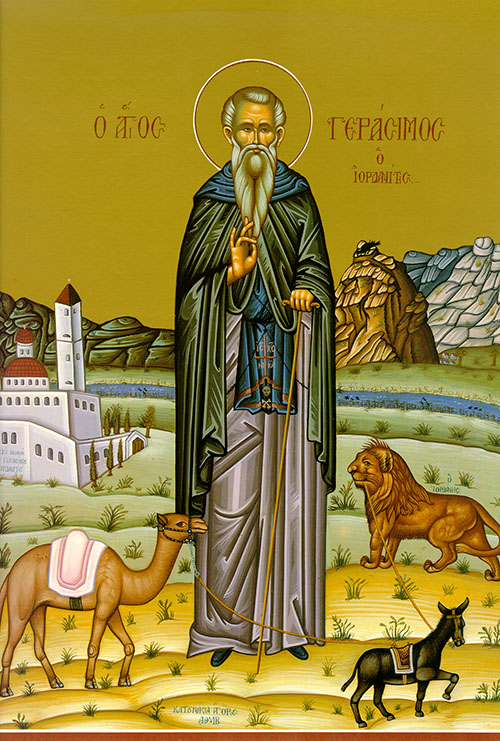 St. Gerasimus first learned about the ascetic life while he was in the Egyptian Thebaid. He went to the Jordan and founded a community in which there were seventy monks. He instituted a special rule in his monastery: each monk spent five days a week in their cell weaving baskets and rush mats. They were never allowed to light a fire in their cells. Five days a week they ate only a little dry bread and a few dates. The monks were required to keep their cells open so that, when they went out, anyone could enter and take whatever they needed. On Saturdays and Sundays they gathered in the monastery church. They had a common meal with a few vegetables and a little wine. Each monk would then bring in and place at the feet of the abbot that which he made during the past five days. Each monk had only one robe. St. Gerasimus set the example to all. During Great Lent he did not eat anything except what he received in Holy Communion. Gerasimus attended the Fourth Ecumenical Council in 451. Although at the beginning Gerasimus leaned toward the Monophysite heresy of Eutyches and Dioscorus, he was a great defender and champion of Orthodoxy at the Council.

Living a life angelic in fasting and powerful in prayer, a life unwavering in trials, unceasing in vigil, and temperate in all things, you astonished the angels and vanquished the legions of devils, O father Gerasimus. You gladden the hearts of the faithful, O blessed saint. The beasts were obedient to you for all of this. Since you have achieved a place of honor before the Lord, pray for the salvation of our souls.

Inflamed with an exalted ideal, you preferred Jordan severity to worldly delights. Until the day you died, the wild animals listened to you; and they died of sorrow upon your grave, O father. Truly they praised you before God. Pray to Him, O father Gerasimus, and keep us in your holy memory.

The man gave names to all the tame animals, all the birds of the air, and all the wild animals; but none proved to be a helper suited to the man.

So the Lord God cast a deep sleep on the man, and while he was asleep, he took out one of his ribs and closed up its place with flesh. The Lord God then built the rib which he had taken from the man into a woman. When he brought her to the man, the man said”

“This one, is bone of my bones and flesh of my flesh;

This one shall be called ‘woman,’ for out of man this one has been taken.”

That is why a man leaves his father and mother and clings to his wife, and the two of them become one body.

The man and his wife were both naked, yet they felt no shame.

Now the snake was the most cunning of all the wild animals that the Lord God had made. He asked the woman,” Did God really say, ‘You shall not eat from any of the trees in the garden’?” The woman answered the snake: “We may eat of the fruit of the trees in the garden; it is only about the fruit of the tree in the middle of the garden that God said, ‘You shall not eat it or even touch it, or else you will die.’” But the snake said to the woman: “You certainly will not die! God knows well that when you eat of it your eyes will be opened and you will be like gods, who know good and evil.” The woman saw that the tree was good for food and pleasing to the eyes, and the tree was desirable for gaining wisdom. So she took some of its fruit and ate it; and she also gave some to her husband, who was with her, and he ate it. Then the eyes of both of them were opened, and they knew that they were naked; so they sewed fig leaves together and made loincloths for themselves.

When they heard the sound of the Lord God walking about in the garden at the breezy time of the day, the man and his wife hid themselves from the Lord God then called to the man and asked him: Where are you? He answered, “I heard you in the garden; but I was afraid, because I am naked, so I hid.” Then God asked: Who told you that you were naked? Have you eaten from the tree of which I had forbidden you to eat? The man replied, “The woman who you put here with me– she gave me fruit from the tree, so I ate it.” The Lord God then asked the woman: What is this you have done? The woman answered, “The snake tricked me, so I ate it.”

Then the Lord God said to the snake:

Because you have done this, cursed are you

among all the animals, tame or wild;

On your belly you shall crawl, and dust you shall eat all the days of your life.

I will put enmity between you and the woman, and between your offspring and hers;

They will strike at your head, while you strike at their heel.

To the woman he said:

I will intensify your toil in childbearing; in pain you shall bring forth children.

Yet your urge shall be for your husband, and he shall rule over you.

To the man he said: Because you listened to your wife and ate from the tree about which I commanded you, You shall not eat from it,

Cursed is the ground because of you!

In toil you shall eat its yield all the days of your life.

Thorns and thistles it shall bear for you,

And you shall eat the grass of the field.

By the sweat of your brow you shall eat bread,

Until you return to the ground, from which you were taken;

For you are dust, and to dust you shall return.

The man gave his wife the name “Eve,” because she was the mother of all the living.

The Lord by wisdom founded the earth, established the heavens by understanding;

By his knowledge the depths are split, and the clouds drop down dew.

My son, do not let these slip from your sight: hold deliberation and planning;

So will they be life to your soul, and an adornment for your neck.

Then you may go your way securely; your foot will never stumble;

When you lie down, you will not be afraid, when you rest, your sleep will be sweet.

Do not withhold any goods from the owner when it is in your power to act.

Say not to your neighbor, “Go, come back tomorrow, and  will give it to you,” when all the while you have it.

Do not plot evil against your neighbors, when they live at peace with you.

Do not contend with someone without cause, with one who has done you no harm.

Do not envy the violent and choose none of their ways:

To the Lord the devious are an abomination, but the upright are close to him.

The curse of the Lord is on the house of the wicked, but the dwelling of the just he blesses;

Those who scoff, he scoffs at, but the lowly he favors.