Mar. 08 Our Venerable Father and Confessor Theophylactus, Bishop of Nicomedia 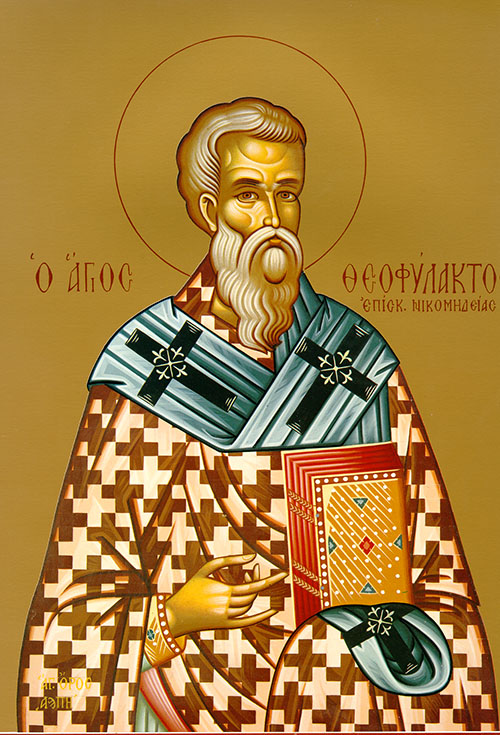 St. Theophylactus, along with St. Michael (Bishop of Synada) lived an ascetic life at a monastery on the coast of the Black Sea. The zealous ascetics were granted the gift of wonderworking by their God-pleasing labors and intense prayers. During a drought, when the field workers were weakened by thirst, the saints prayed and an empty vessel became filled with enough water to last the entire day. After several years at the monastery, they were both consecrated as bishops by the Patriarch Tarasius. St. Michael was made Bishop of Synada, and St. Theophylactus was made Bishop of Nicomedia. Heading the Church of Nicomedia, St. Theophylactus cared for the flock entrusted to him. He built churches, hospices, homes for wanderers, he generously distributed alms, was the guardian of orphans, and personally attended to those afflicted with leprosy. When the iconoclast Leo the Armenian came to the imperial throne, he reinstated iconoclast heresy despite the Seventh Ecumenical Council’s decision.  St. Theophylactus opposed the emperor to his face and predicted a speedy death for the emperor. For his bold prophecy, the saint was removed from his see and sent into exile in Strobil. He languished there for thirty years until his death, which took place around the year 845.

You tried to live a hidden life, O praiseworthy father, but Christ made you a lamp upon the light of thought. He handed you the tablets of spiritual knowledge. Enlighten us by them, O holy Theophylact.

You became a lamp for the whole world, O father, and by preaching that the Word had the nature common to the Father and the Spirit, you enlightened the Council of heavenly fathers. You became a defender of the Trinity. As you stand before them, pray unceasingly for all of us.

Cain said to his brother Abel, “Let us go out in the field.” When they were in the field, Cain attacked his brother Abel and killed him. The Lord asked Cain, Where is your brother Abel? He answered, “I do not know. Am I my brother’s keeper?” God then said: What have you done? Your brother’s blood cries out to me from the ground! Now you are banned from the ground that opened its mouth to receive your brother’s blood from your hand. If you till the ground, it shall no longer give you its produce. You shall become a constant wanderer on the earth. Cain said to the Lord: “My punishment is too great to bear. Look, you have now banished me from the ground. I must avoid you and be a constant wanderer on the earth. Anyone may kill me at sight.” Not so! The Lord said to him. If anyone kills Cain, Cain shall be avenged seven times. So the Lord put a mark on Cain, so that no one would kill him at sight. Cain then left the Lord’s presence and settled in the land of Nod, east of Eden.

My son, to my wisdom be attentive, to understanding incline your ear,

That you may act discreetly, and your lips guard what you know.

Indeed, the lips of the stranger drip honey, and her mouth is smoother than oil;

But in the end she is as bitter as wormwood, as sharp as a two-edged sword.

Her feet go down to death, her steps reach Sheol;

Her paths ramble, you know not where, lest you see before you the road to life.

So now, children, listen to me, do not stray from the words of my mouth.

Keep your way far from her, do not go near the door of her house,

Lest you give your honor to others, and your years to a merciless one;

Lest outsiders take their fill of your wealth, and your hard-won earnings go to another’s house;

And you groan in the end, when your flesh and your body are consumed;

And you say, “Oh, why did I hate instruction, and my heart spurn reproof!

Why did I not listen to the voice of my teachers, incline my ear to my instructors!

I am all but ruined, in the midst of the public assembly!”