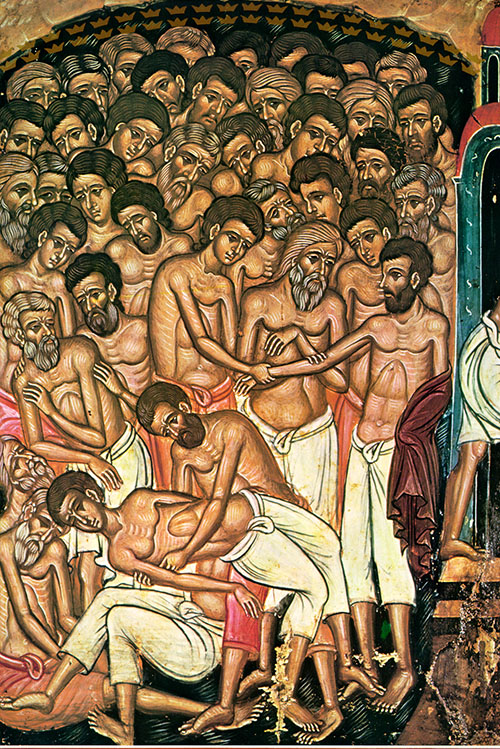 The Forty Holy Martyrs, martyred at Sebaste in Armenia on a frozen lake. They were comrades, not in blood, but in faith and obedience to the will of their heavenly Father. At the time of the emperor Licinius, after binding and savage tortures, the martyrs were ordered to pass the night naked at the coldest time of winter in a swamp in the open air. They consummated their martyrdom by the breaking of their legs at crucifixion. The forty martyrs are: Cyrion(or Quirio), Candidus, Domnus, Hesychius, Heraclius, Smaragdus, Eunocius(or Eunicus), Valens, Vivianus, Claudius, Priscus, Theodulus, Eutychius, John, Xanthius, Helianus, Sisinius, Aggais, Aetius, Flavius, Acacius, Ecdicius, Lysimachus, Alexander, Elias, Gorgonius, Theophilus, Dometian, Gaius, Leontuis, Athanasius, Cyril, Sacerdon, Nicholas, Valerius, Philoctimon, Severian, Chudion, Aglaius, and Meliton.

You left the crowds of this world and joined the Master in heaven, O forty martyrs. Passing through fire and water, you reaped glory and honor in heaven, O blessed saints.

Readings for the Saints

Brothers and sisters: Since we for our part are surrounded by this cloud of witnesses, let us lay aside every encumbrance of sin which clings to us and persevere in running the race which lies ahead; let us keep our eyes fixed on Jesus, who inspires and perfects our faith. For the sake of the joy which lay before him he endured the cross, heedless of its shame. He has taken his seat at the right of the throne of God. Remember how he endures the opposition of sinners; hence do not grow despondent or abandon the struggle. In your fight against sin you have not yet resisted to the point of shedding blood. Moreover, you have forgotten the encouraging words addressed to you as sons: “My sons, do not disdain the discipline of the Lord nor lose heart when he reproves you; for whom the Lord loves, he disciplines; he scourges every son he receives.” Endure your trials as the disciples of God, who deals with you as sons. For what son is there whom his father does not discipline? If you do not know the discipline of sons, you are not sons but bastards. If we respected our earthly fathers who corrected us, should we not all the more submit to the Father of spirits, and live? They disciplined us as seemed right to them, to prepare us for the short span of mortal life; but God does so for our true profit, that we may share his holiness.

The Lord told this parable: “The reign of God is like the case of the owner of an estate who went out at dawn to hire the workman for his vineyard. After reaching an agreement with them for the usual daily wage, he sent them out to his vineyard. He came out about midmorning and saw other men standing around the marketplace without work, so he said to them, ‘You too go along to my vineyard and I will pay you whatever is fair.’ At that they went away. He came out again around noon and did the same. Finally, going out in late afternoon he found others standing around. To these he said, ‘Why have you been standing here idle all day?’ ‘No one has hired us,’ they told him. He said, ‘You go to the vineyard too.’

When evening came the owner of the vineyard said to his foreman, ‘Call the workmen and give them their pay, but  begin with the last group and end with the first.’ When those hired late in the afternoon came up they received a full day’s pay, and when the first group appeared they supposed they would get more; yet they received that same daily wage. Thereupon they complained to the owner, ‘This last group did only an hour’s work, but you have put them on the same basis as us who have worked a full day in the scorching heat.’ ‘My friend,’ he said to one in reply, ‘I do you no injustice. You agreed on the usual wage, did you not? Take your pay and go home. I intend to give this man who was hired last the same pay as you. I am free to do as I please with my money, am I not? Or are you envious because I am generous?’ Thus the last shall be first and the first shall be last.

Cain then left the Lord’s presence and settled in the land of Nod, east of Eden.

“Adah and Zillah, hear my voice;

Wives of Lamech, listen to my utterance:

I have killed a man for wounding me.

If Cain is avenged seven times,

Adam again had intercourse with his wife, and she gave birth to a son who she called Seth. “God has granted me another offspring in place of Abel,” she said, “because Cain killed him.” To Seth, in turn, a son was born, and he named him Enosh.

At that time people began to invoke the Lord by name.

Should your water sources be dispersed abroad, streams of water in the streets?

Let them be yours alone, not shared with outsiders;

Let your fountain be blessed and have joy of the wife of your youth, your lovely hind, your graceful doe. Of whose love you will ever have your fill, and by her ardor always be intoxicated.

Why then, my son, should you be intoxicated with a stranger, and embrace another woman?

Indeed, the ways of each person are plain to the Lord’s sight; all their paths he surveys;

By their own iniquities the wicked will be caught, in the meshes of their own sin they will be held fast;

They will die from lack of discipline, lost because of their great folly.

My son, if you have become surety to your neighbor, given your hand in pledge to another,

You have been snared by the utterance of your lips, caught by the words of your mouth.

So do this, my son, to free yourself, since you have fallen into your neighbor’s power: Go, hurry, rouse your neighbor!