Mar. 12 Our Venerable Father and Confessor Theophane; Our Father Gregory the Great, Pope of Rome 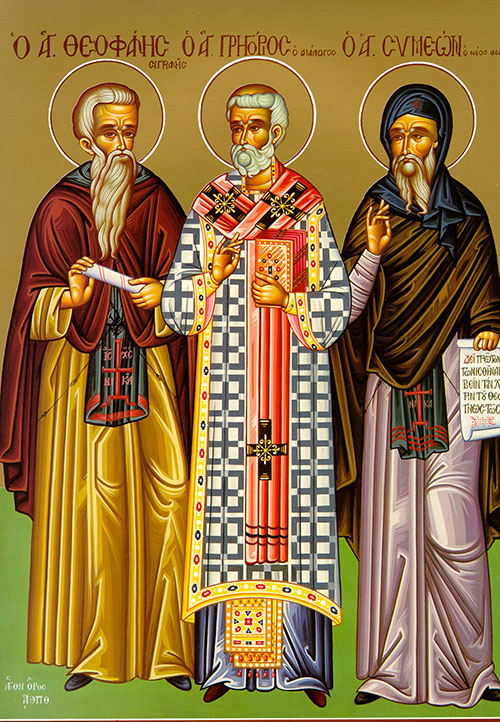 Our venerable father and confessor Theophane of the Sygrian Mountains in Bithynia in the monastery of Ager Magnus. He was called the Chronographer. Having been a very wealthy man, he became a poor monk. He was held in prison for two years by the emperor Leo the Armenian on account of his defense of the cult of holy icons. From there he was deported to Samothrace, where, consumed by his tribulations, he yielded up his spirit in 817.

Our holy father Gregory, pope of Rome. After entering the monastic life, he performed the duty of ambassador to Constantinople. Then on the third of September, he was chosen for the Roman See. He dealt well with earthly matters and, as a servant of the servants of God, he attended to holy things. He showed he was a true pastor in directing affairs, in fully assisting the needy, in fostering the monastic life, and everywhere strengthening or extending the faith. He also wrote excellently on many things concerning moral and pastoral matters.

Adorning your life with purity and disciplining your body, you slew the goats of the devil, O father Theophane. You were carried to eternal life in the Lord. As you stand before Him, now pray for all of us.

You received divine grace from heaven, O blessed Gregory, and strength from his divine power. You sought to follow the way of the Gospel, and your journey’s end brought you Christ’s reward. O blessed saint, beg Him to save us.

You became very much like the shepherds of Christ. You led the flocks of monks into the heavenly sheepfold. There you taught your flock the law of Christ, O father; and now you sing in the heavenly abode, and you rejoice happy in their company.

Brothers and sisters, take care lest any of you have an evil and unfaithful spirit and fall away from the living God. Encourage one another daily while it is still “today,” so that no one grows hardened by the deceit of sin. We have become partners of Christ only if we maintain to the end that confidence with which we began. When Scripture says, “Today, if you should hear his voice, harden not your hearts as at the revolt,” who were those who revolted when they heard that voice? Was it not all whom Moses had led out of Egypt?

At that time Jesus went off to a lonely place in the desert; there he was absorbed in prayer. Simon and his companions managed to track him down, and when they found him, they told him, “Everybody is looking for you!” Jesus said to them: “Let us move on to the neighboring villages so that I may proclaim the good news there also. That is what I have come to do.” So he went into their synagogues preaching the good news and expelling demons throughout the whole of Galilee.

A leper approached Jesus with a request, kneeling down as he addressed him, “If you will do so, you can cure me.” Moved with pity, Jesus stretched out his hand, touched him, and said: “I do will it. Be cured.” The leprosy left him then and there, and he was cured. Jesus gave him a stern warning and sent him on his way. “Not a word to anyone, now,” he said. “Go off and present yourself to the priest and offer for your cure what Moses prescribed. That should be a proof for them.” The man went off and began to proclaim the whole matter freely, making the story public. As a result of this, it was no longer possible for Jesus to enter a town openly. He stayed in desert places; yet people kept coming to him from all sides.