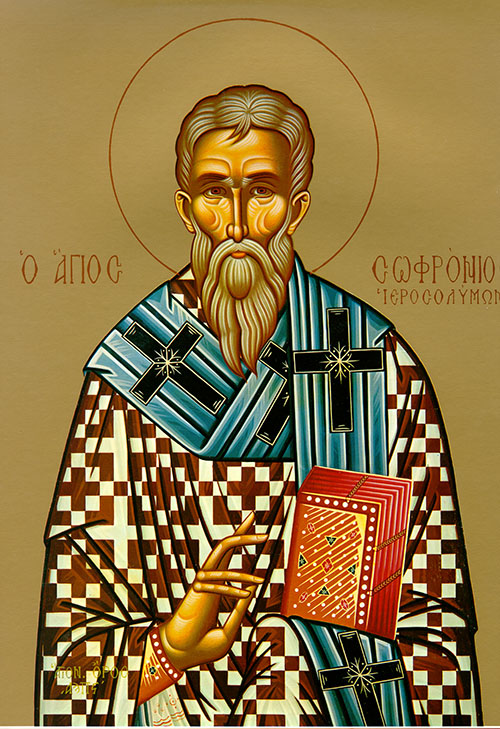 St. Sophronius was born in Damascus around 560. From his youth he was distinguished for his piety and his love for classical studies. He was especially proficient in philosophy, and so he was known as Sophronius the Wise. The future hierarch, however, sought the true philosophy of monasticism, and conversations with the desert-dwellers. He went to Jerusalem to the monastery of St. Theodosius. After the death of St. Modestus in 634, St. Sophronius was chosen Patriarch of Jerusalem. He toiled much for the welfare of the Jerusalem Church as its primate. Toward the end of his life, St. Sophronius and his flock lived through a two year siege of Jerusalem by the Moslems. Worn down by hunger, the Christians finally agreed to open the city gates, on the condition that the enemy spare the holy places. But this condition was not fulfilled, and St. Sophronius died in grief over the desecration of the Christian holy places. Written works by Patriarch Sophronius have come down to us in the area of dogmatics, and likewise his “Excursus on the Liturgy,” the Life of Saint Mary of Egypt, and also about 950 troparia and stikheras from Pascha to the Ascension, including the prayer for the solemn blessing of the water on the Feast of the Theophany.

O guide of the true faith, mirror of piety and commendable behavior, bright star of the universe, and adornment of pontiffs, you enlightened us all by your teachings. O wise Sophronius, inspired by God and lyre of the Holy Spirit, intercede with Christ our God that He may save our souls.

You advanced by heavenly fervor and spread the true dogma by your lips. You ruled your Church well and reformed the monks within it. You clearly preached words of instruction for us, and so we sing to you, O blessed patriarch: Rejoice, luminous glory of the faithful.

When Noah was five hundred years old, he begot Shem, Ham, and Japheth.

When human beings began to grow numerous on the earth and daughters were born to them, the sons of God saw how beautiful the daughters of human beings were, and so they took for their wives whomever they pleased. Then the Lord said: My spirit shall not remain in human beings forever, because they are only flesh. Their days shall comprise one hundred and twenty years.

The Nephilim appeared on earth in those days, as well as later, after the sons of God had intercourse with the daughters of human beings, who bore them sons. They were the heroes of old, the men renown.

When the Lord saw how great the wickedness of human beings was on earth, and how every desire that their heart conceived was always nothing but evil, the Lord regretted making human beings on the earth, and his heart was grieved.

So the Lord said: I will wipe out from the earth the human beings I have created, and not only the human beings, but also the animals and the crawling things and the birds of the air, for I regret that I made them. But Noah found favor with the Lord.

Observe, my son, your father’s command, and do not reject your mother’s teaching;

Keep them fastened over your heart always, tie them around your neck.

When you lie down they will watch over you, when you wake, they will share your concerns; wherever you turn, they will guide you.

For the command is a lamp, and the teaching a light, and a way to life are the reproofs that discipline,

Keeping you from another’s wife, from the smooth tongue of a foreign woman.

Do not lust in your heart after her beauty, do not let her captivate you with her glance!

For the price of a harlot may be scarcely a loaf of bread, but a married woman is a trap for your precious life.

Can a man take embers into his bosom, and his garments not be burned?

Or can a man walk in live coals, and his feet not be scorched?

So with him who sleeps with another’s wife– none who touches her shall go unpunished.

Thieves are not despised if out of hunger they steak to satisfy their appetite.

Yet if caught they must pay back sevenfold, yield up all the wealth of their house.

But those who commit adultery have no sense; those who do it destroy themselves.

They will be beaten and disgraced, and their shame will not be wiped away;

For passion enraged the husband, he will have no pity on the day of vengeance;

He will not consider any restitution, nor be satisfied by your many bribes.

My son, keep my words, and treasure my commands.