Mar. 13 The Translation of the Relics of our Holy Father Nicephorus, Patriarch of Constantinople 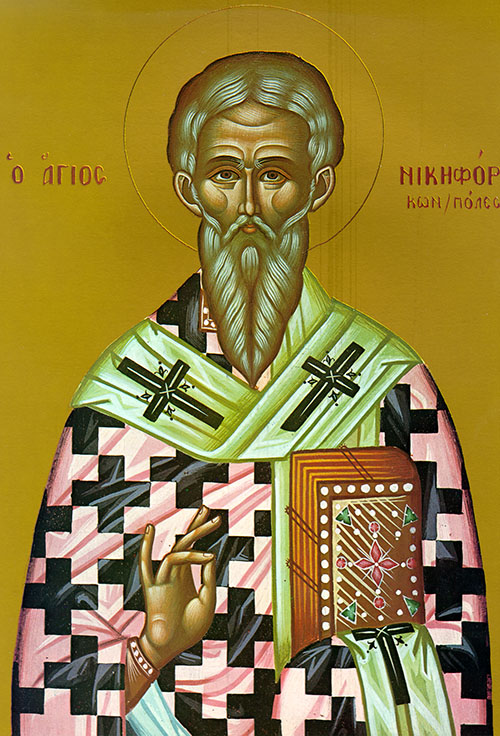 St. Nicephorus, Patriarch of Constantinople, died while in exile on the island of Prochonis in the year 827. After the death of the last iconoclast emperor, the relics of the holy father were brought back to Constantinople, first to the church of Hagia Sophia and then finally to the Church of the Holy Apostles in the year 846.

You reaped your reward from your patience, unceasing prayer, love of the poor, and constant comfort of the needy. O blessed and merciful Nicephorus, beseech Christ to save our souls.

The choir of patriarchs honors your memory with chants and hymns of praise, O Nicephorus; transferring your relics, it inherits your spirit. Therefore, the Church glorifies Christ the King, who alone loves human-kind.

Brothers and sisters: (Scripture says:) “Lord, of old you established the earth and the heavens are the work of your hands. They will perish, but you remain; all of them will grow old like a garment. You will roll them up like a cloak, like a garment they will be changed. But you are the same and your years will have no end.”

To which of the angels has God ever said, “ Sit at my right hand till I make your enemies your footstool”? Are they not all ministering spirits, sent to serve those who are to inherit salvation?

In view of this, we must attend all the more to what we have heard, lest we drift away. For if the word spoken through angels stood unchanged, and all transgressions and disobedience received its due punishment, how shall we escape if we ignore a salvation as great as ours? Announced first by the Lord, it was confirmed to us by those who had heard him.

At that time Jesus came back to Cappernaum after a lapse of several days and word got around that he was at home. At that the people began to gather in great numbers. There was no longer any room for them, even around the door. While Jesus was delivering God’s word to them, some people arrived bringing a paralyzed man to him. The four who carried him were unable to bring him to Jesus because of the crowd, so they began to open up the roof over the spot where Jesus was. When they had made a hole, they let down the mat on which the paralytic was lying. When Jesus saw their faith, he said to the paralyzed man, “My Son, your sins are forgiven.” Now some of the scribes were sitting there asking themselves”: “Why does the man talk that way? He commits blasphemy! Who can forgive sins except God alone?’ Jesus was immediately aware of their reasoning, though they kept it to themselves, and he said to them: “Why do you harbor these thoughts? Which is easier, to say to the paralytic, ‘Your sins are forgiven,’ or to say, ‘Stand up, pick up your mat, and walk again’? That you may know that the Son of Man has authority on earth to forgive sins” (he said to the paralyzed man), “I command you: Stand up! Pick-up your mat and go home.” The man stood and picked up his mat and went outside in the sight of everyone. They were awestruck; all gave praise to God, saying, “We have never seen anything like this!”