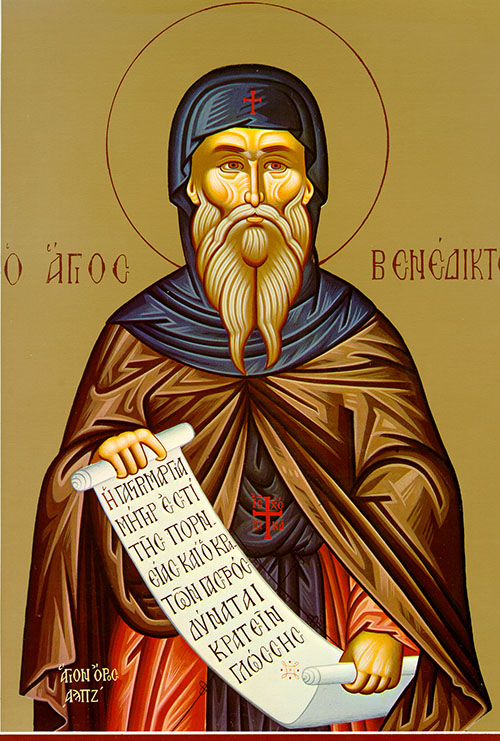 Benedict was born in the Italian province of Nursia in the year 480, to wealthy and distinguished parents. He did not remain long in school for he realized himself that through book-learning he could lose “the great understanding of his souls.” He left school “an unlearned wise man and an understanding fool.” He retreated to a monastery, where he was tonsured by the monk Romanus, after which he withdrew to a steep mountain where he remained in a cave for more than three years in a great struggle with his soul. He gathered many disciples around himself, and then went to Monte Casino. There he founded his celebrated monastery and composed his “Rule for Monks.” This rule spread so widely that he has deserved to be called patriarch of monks in the West. It is said that he died on the twenty-first day of March in 550.

The divine image was clearly preserved in you, O father; you took up your cross and followed Christ, teaching us by your life not to favor the passing flesh but attend to our immortal souls. O venerable Benedict, your soul now rejoices with the angels.

You were enriched by God’s grace and sealed your calling with works. Pleasing to Christ God in prayer and fasting, you have shown yourself filled by the Spirit’s gifts, O Benedict, champion against the enemies, healer of the sick, and swift help for our souls.

These are the descendants of Noah. Noah was a righteous man and blameless in his generation; Noah walked with God. Noah begot three sons: Shem, Ham, and Japeth.

Make yourself an ark of gopherwood, equip the ark with various compartments, and cover it inside and out with pitch. This is how you shall build it: the length of the ark will be three hundred cubits, its width fifty cubits, and its height thirty cubits. Make an opening for daylight and finish the ark a cubit above it. Put the ark’s entrance on its side; you will make it with bottom, second and third decks. I, on my part, am about to bring the flood waters on the earth, to destroy all creatures under the sky in which there is the breadth of life; everything on earth shall perish. I will establish my covenant with you. You shall go into the ark, you and your sons, your wife and your sons’ wives with you. Of all living creatures you shall bring two of every kind into the ark, one male, one female, to keep them alive along with you. Of every kind of bird, of every kind of animal, and of every kind of thing that crawls on the ground, two of each will come to you, that you may keep them alive. Moreover, you are to provide yourself with all the food that is to be eaten, and store it away, that it may serve as provisions for you and for them. Noah complied; he did just as God commanded him.

Does not Wisdom call, and Understanding raise her voice?

On the top of the heights along the road, at the crossroads she takes her stand;

By the gates at the approached of the city, in the entryways she cries aloud:

“To you, O people, I call; my appeal is to you mortals.

You naive ones, gain prudence, you fools, gain sense.

Indeed, my mouth utters truth, and my lips abhor wickedness.

All of them are straightforward to the intelligent, and right to those who attain knowledge.

Take my instruction instead of silver, and knowledge rather than choice gold.

[For Wisdom is better than corals, and no treasure can compare with her.]

I, Wisdom, dwell with prudence, and useful knowledge I have.

[The fear of the Lord is hatred of evil;] Pride, arrogance, the evil way, and the perverse mouth I hate.

Mine are counsel and advice; mine is strength; I am understanding.

By me kings reign, and rulers enact justice;

By me princes govern, and nobles, all the judges of the earth.

Those who love me I also love, and those who seek me find me.

With me are riches and honor, wealth that endures, and righteousness.

My fruit is better than gold, even pure gold, and my yield than choice silver.

On the way of righteousness I walk, along the paths of justice,

Granting wealth to those who love me, and filling their treasuries.”