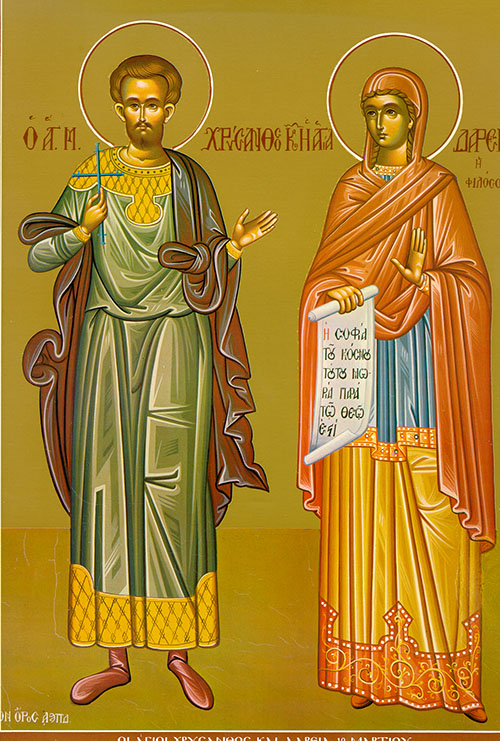 St. Chrysanthus came from a pagan family who moved from Alexandria to Rome in the third century. He received a fine education, and among the books he read were those in which pagans discussed Christianity. The young man, however, wanted to read books written by Christians themselves. He finally managed to get a copy of the New Testament, which enlightened his rational soul. Seeking someone to instruct him in the Holy Scriptures, he found the presbyter Carpophoros hiding from persecution, and the saint received holy Baptism from him. After this, Chrysanthus began to preach the Gospel. His own father tried to turn him in for being a Christian, and finally, he married him to Daria, a priestess of Minerva. St. Chrysanthus managed to convert his wife to Christ, and the young couple agreed to live a celibate lives. After the death of his father, Chrysanthus and Daria began to live in separate houses. St Chrysanthus converted several young men to Christ, and many pious women gathered around St. Daria. The people of Rome complained to the eparch Celerinus that the saints were preaching celibacy and attracting too many young men and women to monasticism. St. Chrysanthus was sent to the tribune Claudius for torture. The emperor Numerian ordered Saints Chrysanthus and Daria be turned over to the executioners. After many cruel tortures, the martyrs were buried alive in the ground.

O Lord our God your holy martyrs have deserved the crown of immortality on account of their good fight. Armed with your strength, they have vanquished their persecutors and crushed Satan’s dreadful might. Through their supplications, O Christ our God, save our souls.

In your desire for the perfect Good, you pursued whatever good you saw. By your golden words, Chrysanthus, you led the glorious Daria to Christ. She endured many torments and shamed the enemy. We ask both of you to remember us who keep your memory.

Brothers and sisters: Recall the days gone by when, after you had been enlightened, you endured a great contest of suffering. At times you were publicly exposed to insult and trial; at other times you associated yourselves with those who were being so dealt with. You even joined in the suffering of those who were in prison and joyfully assented to the confiscation of your goods, knowing that you had better and more permanent possessions. Do not, then, surrender your confidence; it will have great reward. You need patience to do God’s will and receive what He has promised.

At that time as Jesus moved on he saw Levi the son of Alphaeus at his tax collector’s post, and said to him, “Follow me.” Levi got up and became his follower. While Jesus was reclining to eat in Levi’s house, many tax collectors and those known as sinners joined him and his disciples at dinner. The number of those who followed him was large. When the scribes who belonged to the Pharisees party saw that Jesus was eating with tax collectors and offenders against the law, they complained to his disciples, “Why does he eat with such as these?” Overhearing the remark, Jesus said to them, “People who are healthy do not need a doctor; sick people do. I have come to call sinners, not the self-righteous.”