Mar. 18 Our Father among the Saints Cyril, Archbishop of Jerusalem 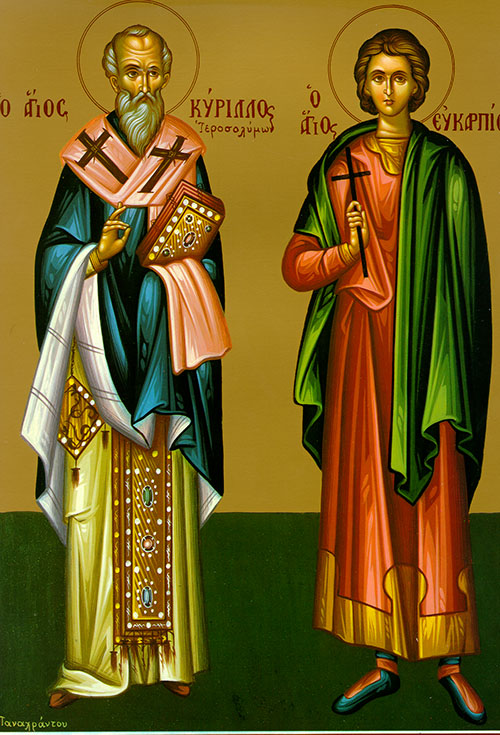 St. Cyril, Archbishop of Jerusalem, was born in Jerusalem in the year 315 and was raised in strict Christian piety. Upon reaching the age of maturity, he became a monk, and in the year 346 he became a presbyter. In the year 350, upon the death of Archbishop Maximus, he succeeded him on the episcopal throne of Jerusalem. As Patriarch of Jerusalem, St. Cyril fought against the heresies of Arius and Macedonius. In doing so, he aroused the animosity of the Arian bishops, and they sought to have him deposed and banished from Jerusalem. St. Cyril’s works include twenty-three Instructions (18 are Catechetical, for those preparing for baptism, and 5 are for the newly-baptized) and two discourses on Gospel themes: “On the Paralytic,” and “Concerning the Transformation of Water into Wine at Cana.” At the heart of the Catechetical Instructions is a detailed explanation of the Symbol of Faith. The saint suggests that a Christian should inscribe the Symbol of Faith upon “the tablets of the heart.” St. Cyril, a great ascetic and a champion of Orthodoxy, died in the year 386.

The sincerity of your deeds has revealed you to your people as a teacher of moderation, a model of faith, and an example of virtue. Therefore, you attained greatness through humility and wealth through poverty. O father and archbishop Cyril, ask Christ our God to save our souls.

You enlightened your people by your words which came from divine inspiration. You honored the indivisible nature of the Trinity which embraces three Persons. We rejoice that you are an advocate of God, and we celebrate your all-holy memory.

At the end of forty days, Noah opened the hatch of the ark that he had made, and he released a raven. It flew back and forth until the waters dried off from the earth. Then he released a dove, to see if the waters had lessened on the earth. But the dove could find no place to perch, and it returned to him in the ark, for there was water over all the earth. Putting out his hand, he caught the dove and drew it back to him inside the ark. He waited yet seven days more and again released the dove from the ark. In the evening the dove came back to him, and there in its bill was a plucked-off olive leaf! So Noah knew that the waters had diminished on the earth. He waited yet another seven days and then released the dove; but this time it did not come back.

Then God said to Noah: Go out of the ark, together with your wife and your sons and your sons’ wives. Bring out with you every living thing that is with you– all creatures, be they birds or animals or crawling things on the earth– and let them abound on the earth, and be fertile and multiply on it. So Noah came out, together with his sons and his wife and his sons’ wives; and all the animals, all the birds, and all the crawling creatures that crawl on the earth went out of the ark by families.

Then Noah built an altar to the Lord, and choosing every clean animal and every clean bird, he offered burnt offerings on the altar. When the Lord smelled the sweet odor, the Lord said to himself: Never again will I curse the ground because of the human beings, since the desires of the human heart are evil from youth; nor will I ever again strike down every living being, as I have done.

The mouth of the just yields wisdom, but the perverse tongue will be cut off.

The lips of the just know favor, but the mouth of the wicked, perversion.

False scales are an abomination to the Lord, but an honest weight, his delight.

When pride comes, disgrace comes; but with the humble is wisdom.

The honesty of the upright guides them; the faithless are ruined by their duplicity.

Wealth is useless on a day of wrath, but justice saves from death.

The justice of the honest makes their way straight, but by their wickedness the wicked will fall.

The justice of the upright saves them, but the faithless are caught in their own intrigue.

The just are rescued from a tight spot, but the wicked fall into it instead.

By a word the impious ruin their neighbors, but through their knowledge the just are rescued.

When the just prosper, the city rejoices; when the wicked perish, there is jubilation.

Through the blessings of the upright the city is exalted, but through the mouth of the wicked it is overthrown.

Whoever reviles a neighbor lacks sense, but the intelligent keep silent.