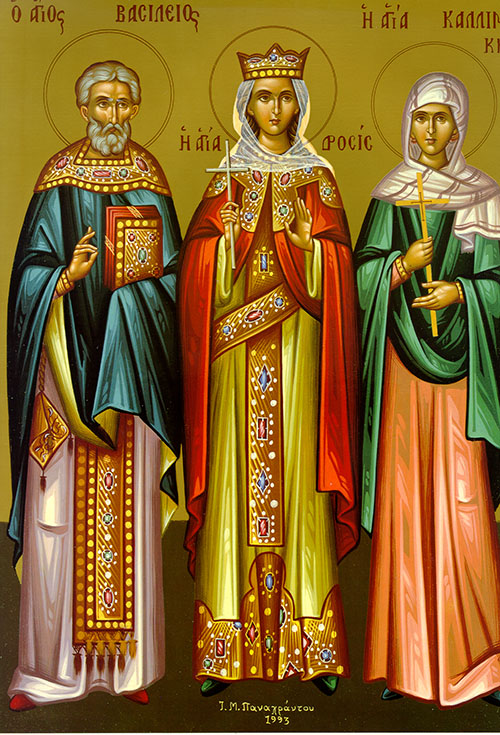 Hieromartyr Basil was a presbyter in Ancyra, Galatia. Fighting against the Arian heresy, he urged his flock to cling firmly to Orthodoxy. Because of this, St. Basil was deposed from his priestly rank by a local Arian council, but a Council of 230 bishops in Palestine reinstated him. St. Basil continued to openly preach Orthodoxy and denounce the Arians. He, therefore, became a victim of persecution and was subjected to punishment as a man dangerous to the state. The saint remained unshakable, and was tortured for it. When the emperor Julian the Apostate (361-363) arrived in the city of Ancyra, St. Basil bravely confessed Christ before him at trial, and denounced the emperor for his apostasy. Julian ordered that strips of skin be cut from the saint’s back. St. Bail endured the gruesome torture with great patience. Having made such a prayer, and lacerated all over by red-hot irons, the saint fell into a sweet slumber and gave up his soul to the hands of God on June 29, 362. His commemoration was transferred to March 22 because of the Feast of Saints Peter and Paul.

O holy priest-martyr Basil, you lent yourself to the apostle’s way of life and succeeded them on their throne. Inspired by God, you found the way to contemplation through the practice of virtue. Therefore, you became a perfect teacher of truth, fighting for the faith unto the shedding of your blood. Intercede with Christ our God that He may save our souls.

You ran the course and kept the faith, O Basil. Because of this you were crowned with glory in martyrdom and hailed as an immovable pillar of the Church. You confessed the Son to be coeternal in the Trinity with the Father and the Spirit. Now beg the Holy Trinity to save all of us who honor you.

For their good sense people are praised, but the perverse of heart are despised.

Better to be slighted and have a servant than put on airs and lack bread.

The just take care of their livestock, but the compassion of the wicked is cruel.

Those who till their own land have food in plenty, but those who engage in idle pursuits lack sense.

A wicked person desires the catch of evil people, but the root of the righteous will bear fruit.

By the sin of their lips the wicked are ensnared, but the just escape from a tight spot.

From the fruit of their mouths people have their fill of good, and the works of their hands come back upon them.

The way of fools is right in their own eyes, but those who listen to advice are the wise.

Fools immediately show their anger, but the shrewd conceal contempt.

The babble of some people is like sword thrusts, but the tongue of the wise is healing.

Truthful lips endure forever, the lying tongue, for only a moment.

Deceit is in the heart of those who plot evil, but those who counsel peace have joy.

No harm befalls the just, but the wicked are overwhelmed with misfortune.

Lying lips are an abomination to the Lord, but those who are truthful, his delight.