Mar. 23 The Holy Venerable-Martyr Nicon and his Companions 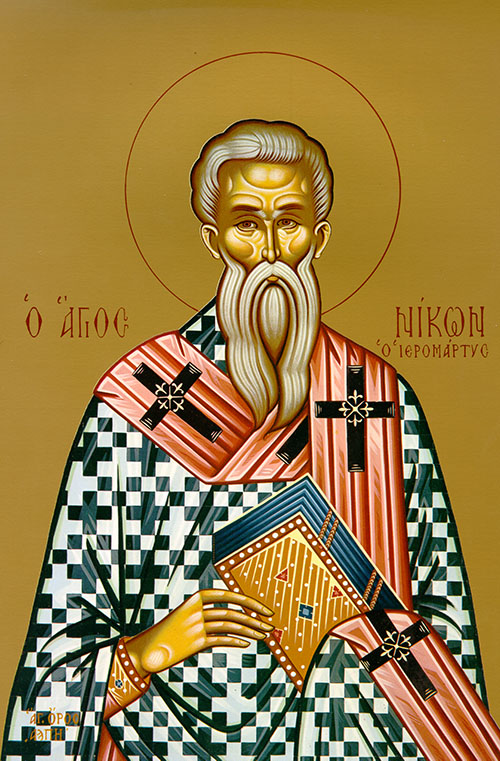 The monk martyr Nicon was born in Neapolis (Naples). His father was a pagan, and his mother a Christian. He was not baptized, but his mother secretly instructed him in the tenets of Christianity. Nicon was still a pagan when he reached adulthood. He served as a soldier, and showed unusual courage and strength. Once, Nicon and his military company were surrounded by enemies. In deadly peril, he remembered the Christian precepts of his mother and, signing himself with the Sign of the Cross, he prayed to God, vowing to be baptized if he were saved. Filled with unusual strengths, he killed many of the enemy, and put the rest to flight. He managed to return home, giving thanks to God for preserving his life. With the blessing of his mother, he set off in search of a priest. This was no easy thing to do in a time of persecution. St. Nicon took a ship to the island of Chios. He went up on a high mountain and spent eight days in fasting and prayer, entreating the Lord to help him. When St. Nicon had lived on the mountain for three years, an angel revealed to the bishop Theodosius that Nicon should be consecrated bishop, and should move to the province of Sicily with all the monks. Bishop Theodosius obeyed the angel, and then died after he had entrusted the 190 monks to St. Nicon. After he buried Bishop Theodosius, St. Nicon sailed to Sicily with the brethren.

By your holy life you assembled a choir from those who had lived humbly and had followed you before the throne of God on high. Your radiance spans the heavens like the very sun, and the rays of your pains disperse darkness and wash out deceit by the torrent of your blood.

The sons of Noah who came out of the ark were Shem, Ham, and Japeth. Ham was the father of Canaan. These three were the sons of Noah, and from them the whole earth was populated.

Noah, a man of the soil, was the first to plant a vineyard. He drank some wine, became drunk, and lay naked inside his tent. Ham, the father of Canaan, saw his father’s nakedness, and he told his two brothers outside. Shem and Japeth, however, took a robe, and holding it on their shoulders, they walked backward and covered their father’s nakedness; since their faces were turned the other way, they did not see their father’s nakedness. When Noah woke up from his wine and learned what his youngest son had done to him, he said:

“Cursed be Canaan! The lowest of slaves shall he be to his brothers.”

These are the descendants of Noah’s sons, Shem, Ham, and Japeth, to whom children were born after the flood.

The shrewd conceal knowledge, but the hearts of fools proclaim folly.

The diligent hand will govern, but sloth makes for forced labor.

Worry weighs down the heart, but a kind word gives it joy.

The just act as guides to their neighbors, but the way of the wicked leads them astray.

Sloth does not catch its prey, but the wealth of the diligent is splendid.

In the path of justice is life, but the way of abomination leads to death.

A wise son loves correction, but the scoffer heeds no rebuke.

From the fruit of the mouth one enjoys good things, but from the throat of the treacherous comes violence.

Those who guard their mouths preserve themselves; those who open wide their lips bring ruin.

The just hate deceitful words, but the wicked are odious and disgraceful.

Justice guards one who walks honestly, but sin leads the wicked astray.

One acts rich but has nothing; another acts poor but has great wealth.

People’s riches serve as ransom for their lives, but the poor do not even hear a threat.

The light of the just gives joy, but the lamp of the wicked goes out.