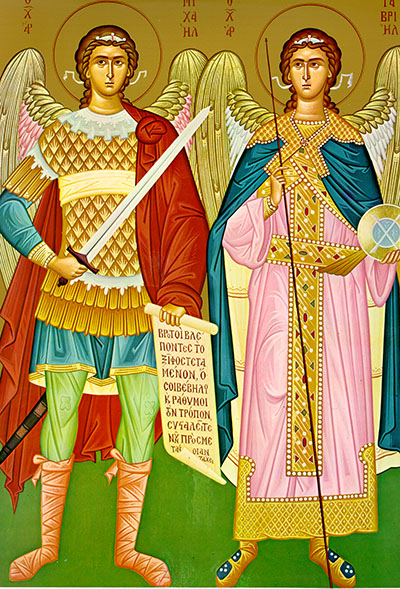 Gabriel is the herald of the Incarnation of the Son of God. He is one of the seven archangels who stand before the throne of God. He appeared to Zacharias to announce the birth of the Forerunner. Gabriel said of himself: I am Gabriel, that stand in the presence of God (Luke 1:19). His name Gabriel means “man-God.” The Holy Fathers, in speaking of the Annunciation, comment that an archangel with such a name was sent to signify Who He was, and what He would be like, Who would be born of the All-pure one. He would be the God-man, the mighty and powerful God. Some of the Fathers understood that this same Gabriel appeared to Joachim and Anna concerning the birth of the Virgin Mary, and that Gabriel instructed Moses in the wilderness to write the Book of Genesis. The Holy Fathers say that Gabriel belongs to the first and greatest order of heavenly powers, the Seraphim, since the Seraphim stand closest to God. He is, therefore, one of the seven Seraphim closest to God. The names of the seven are Michael, Gabriel, Raphael, Uriel, Salathiel, Jegudiel, and Barachiel. To this number some add Jeremiel. Each one has his own particular service and all are equal in honor. Why did God not send Michael? Because Michael’s service is to suppress the enemies of the Faith of God, while Gabriel’s  is the mission of announcing the salvation of mankind.

O commander of angels, minister of holy glory and messenger of God himself, all-mysterious, and exalted Trinity. Pray that we be delivered from trials and sorrows so that we might sing: Rejoice, for you protect your servants.

Readings for the Archangel

Brothers and sisters: If the word spoken through angels stoon unchanged, and all transgressions and disobedience received its due punishment, how shall we escape if we ignore a salvation as great as ours? Announced first by the Lord, it was confirmed to us by those who had heard him. God then gave witness to it by signs, miracles, varied acts of power, and distribution of the gifts of the Holy Spirit as he willed.

For he did not make the world to come–that world of which was speak– subject to angels. Somewhere this is testified to, in the passage that says: “What is man that you should be mindful of him, or the son of man that you should care for him? You made him for a little while a little lower than the angels: you crowned him with glory and honor, and put all things under his feet.” In subjecting all things to him, God left nothing unsubjected. At present we do not see all things thus subject, but we do see Jesus crowned with glory and honor because he suffered death: Jesus, who was made for a little while lower than the angels, that through God’s gracious will he might taste death for the sake of all men. Indeed, it was fitting that when bringing many sons to glory God, for whom and through whom all things exist, should make their leader in the work of salvation perfect through suffering.

Brothers and sisters: Even though we speak in this way, we are persuaded of better things in your regard, things pointing to your salvation. God is not unjust; he will not forget your work and the love you have shown him by your service, past and present, to his holy people. Our desire is that each of you show the same zeal to the end, fully assured of that for which you hope. Do not grow lazy, but imitate those who, through faith and patience, are inheriting the promises.

At that time Jesus left the territory of Tyre and returned by way of Sidon to the Sea of Galilee, into the district of the Ten Cities. Some people brought him a deaf man who had a speech impediment and begged Jesus to lay his hand on him. Jesus took him off by himself away from the crowd. He put his fingers into the man’s ears and, spitting, touched the man’s tongue; then Jesus looked up to heaven and emitted a groan. He said to the man “Ephphathal!” (that is “Be opened!”) At once the man’s ears were opened; he was greed from the impediment, and began to speak plainly. Then Jesus enjoined them strictly not to tell anyone; but the more he ordered them not to, the more they proclaimed it. Their amazement went beyond all bounds and they said: “He has done everything well! He makes the deaf hear and the mute speak!”